Humour as black as a black taxi: joking about the Troubles 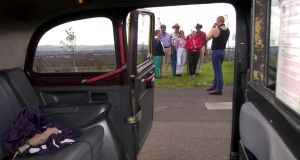 A black taxi tour in West Belfast: “You have to [include jokes]. You’d crack if you didn’t.” Photograph: Stephen Wilson/Pacemaker

This has been a good year for Northern Irish comedy. From the unexpected return of original conflict caper Give My Head Peace, through to the riotous debut of Lisa McGee’s Derry Girls, humorous reflections on the Troubles appear to be experiencing something of a renaissance in the North.

Such a sharp shift in popular accounts of the Northern Irish conflict is fortuitous, given that we are fast approaching the 20th anniversary of the Good Friday agreement. Indeed, as evidenced by the rapturous social media responses to Derry Girls, in spite of the seriousness with which it is often treated in mainstream media, the hunger for more humorous and, by implication, more realistic depictions of peoples’ lives during the conflict, is very real.

As McGee has herself acknowledged, in spite of the routine bomb scares and shootings that were a fundamental part of Northern Irish citizenship at the time, life during the Troubles also had an undeniably comic edge – one which televisual culture is only now starting to catch up with.

Of course the trope of the “funny Irish”, as much as it might be relevant for shows like McGee’s, is also riven with colonial stereotypes, which position the Irish “man” as a “merry, whiskey-drinking pugnacious clown”. Such perceptions have been reinforced since the end of the Troubles in particular, where the ready adoption of the “craic” into Irish-themed bars has seen tourists alternately revel in, and demand, an authentically funny Irish experience at every turn which can put a particular pressure on public sector workers to live up to such stereotypes.

The pressures, but also the possibilities that such “commodified craic” can bring to reflections on the Troubles is most easily typified in the much maligned mural tourism sector in Belfast, which has gone from strength to strength over the past 10 years.

Popular with visitors to the North even before the ceasefires, in 2014 mural tours of West Belfast, and visits to areas associated with the conflict accounted for almost 25 per cent of tourist activity in the city, according to Belfast Tourism Monitor. However, while detractors of the industry bemoan the way it turns war into a spectacle, the use of humour on these tours generally receives less comment, in spite of its centrality to the mural experience.

My research on Troubles tourism in Belfast highlighted the impulse towards humour as one of the defining characteristics of the black cab mural tour in particular. The majority of guides, regardless of political allegiance or background, tended to use humour as the primary mode of engaging the tourist. While this may not be unusual within guided tours in general, the frequency with which bad-taste jokes emerged during the black cab tour was surprising, given the erstwhile seriousness of the topic at hand.

Doubtless partly playing up to touristic demands for the “craic”, commonly repeated jokes covered a range of topics, from the Brighton bombing (“Maggie Thatcher was in the toilet when the bomb went off. Do you know what they call that? A lucky shit!”), through to Stormont (“in my country we go to prison first and then become president”). However regardless of topic, I always got the sense when on these tours that such jokes went beyond mere “stage Irishy” and were in fact illustrative of a significant change that has taken place since the signing of the Good Friday agreement.

Explanations for why guides chose to incorporate such moments into their tours were wide-ranging, with some claiming to use humour as a pedagogical device, while others talked of the comic relief that such jokes provided on an otherwise emotionally draining tour. As one guide put it: “You have to [include jokes]. You’d crack if you didn’t”. However, less forthcoming among interviewees was any acknowledgement of humour’s power as a divisive force which can, reflect as well as create tensions between different social groups.

This is certainly the case on the black cab tour, where the initial shock of hearing casual jokes about the Troubles often makes the tourist acutely aware of their outsider status in Belfast, at the same time as it suggests, through the invitation to laugh with the guide, an intimacy with the communities they are standing in.

Such paradoxes are common in relation to humour’s function within traumatised societies in general, where dark jokes are often used to sustain victims of violence by disrupting the complacency of those who witness it from afar and can be a powerful mode of resisting the status quo.

However, in relation to the black cab tour, the power of the dark joke clearly raises more ethical questions than it solves, not least because in these instances, the invitation to laugh is directed towards the transient outsider (the tourist), rather than those everyday civilians living in West Belfast.

Certainly, the question of how funny a joke about a fatal bombing can be becomes a lot more pressing when we remember that the joke teller may once have been part of the organisation responsible for the bombing – something which the average tourist may not always be aware of.

As the sharp wit found in shows such as Derry Girls reminds us, the craic is indeed mighty when it comes to articulating more lifelike representations of the Troubles, but it is also, undeniably, a might that needs treating with care.

Dr Katie Markham is a lecturing associate in media, culture and heritage at Newcastle University, and a recent PhD graduate in the department of sociology at the University of Leeds. Her thesis, "The person inside it has to be part of it’: Empathy, Post-Conflict Heritage and ‘Troubles Tourism’ in Northern Ireland”, offers a critical appraisal of empathy, affect and emotion in relation to Belfast’s paramilitary museums and black cab mural tours.