Football's own-goal in struggle for reconciliation in North 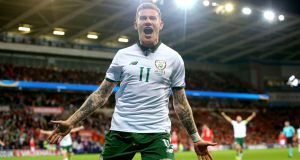 Derry-born James McClean: the very reason such players choose to appear in a Republic of Ireland jersey is that they do not feel at home in an environment where they have to justify their identities. Photograph: Ryan Byrne/Inpho

Twenty years after the signing of the Belfast Agreement, a great deal has changed in Northern Ireland, now a place very much in vogue. Thanks to the success of shows such as Derry Girls and Game of Thrones, people now associate this once-benighted land with comedy, tourism and television. Yet, for all this new hope, culture wars continue to simmer beneath the surface.

These battles over language, symbols and identity have been exacerbated by tectonic shifts in the political landscape as a consequence of Brexit. Further complicated too by internal battles for the thrones of political parties on the unionist side, particularly the British Conservatives. Powersharing remains a constant issue, two decades after it was first proposed as an essential part of the legal and political framework signed on April 10th, 1998.

Politically then, aside from a cessation of violence, very little appears to have changed in two decades where so much else has happened. After all, if we roll back the clock to 1998, George RR Martin had only started out writing his Song of Ice and Fire series and few southern tourists ever ventured across the northern Border’s metaphorical walls. Bronagh Gallagher out of The Commitments was probably Ireland’s best known Derry Girl.

Elsewhere, in April 1998, Arsenal were on their way to winning the Premier League with a French manager and 32 nations preparing to compete in the 16th FIFA World Cup tournament. But for the first time since 1978 nobody in an Irish shirt would be involved. Starting with Spain 1982, Northern Ireland captured the hearts and imaginations of everyone on the island of Ireland with their performances. Despite the huge divisions and brutal conflict of the times, just one year after the H-Block hunger strikes, few people linked together football and politics. The same was true of Mexico in 1986 when Northern Ireland again returned to football’s top stage, though never reached the heights of four years earlier in Seville.

By the 1990s, the balance of power had shifted south. Now managed by Englishman Jack Charlton, the Republic became the island’s top team. With a blend of Irish talent and the British-born descendents of Irish immigrants, they made history by reaching their first World Cup in 1990. More than that, they changed attitudes. Loyalists began to speak of new associations with the Irish tricolour, no longer simply seen as the banner of Irish republicanism.

Sadly though, as Ireland edged down a road to peace in the early 1990s, an unlikely speed bump derailed relations once again island-wide.

The draw put North versus South in the same qualifying group for the 1994 World Cup, serving to heighten tensions between the two teams and their supporters, particularly those north of the Border. Ironically, around the same time, the peace process gathered speed after a particularly violent chapter on the part of both loyalists and republicans, including the “World Cup massacre” in Loughinisland. Though that was to be one of the last of the Northern conflict, it again served to reinforce a growing linkage of football to national identities. Support for the Republic alone became increasingly common among younger generations of northern nationalists with the Northern Ireland team now seen, by many, as representative of loyalism and Britishness.

Despite the advent of peace and the prospect of powersharing, the two communities seemed more polarised than ever when it came to football. For those who were older, this was a far cry from the halcyon days of 1982 when it was possible to pledge our banners to both sides at the same time.

By the early 2000s, this division reached a crescendo with death threats against Neil Lennon, a Catholic who played for Northern Ireland and Glasgow Celtic. That, at least, spurred the Irish Football Association to take action.

Over the past decade and a half, there have been concerted efforts to reduce the influence of Ulster loyalism’s songs and symbols at Northern Ireland games. However, the team remains steeped in Britishness. For example, before games, unlike in Scotland and Wales, the British national anthem is played. Around Remembrance Day too, games often carry associations with the military that for many nationalists once represented an occupying force. Therefore, Northern Irish football remains a cold house for many Catholics and nationalists who do not see equal accommodation of their identities.

Sadly, this does not make football a social anomaly. Rather, the issues that polarise football supporters in the North are a microcosm of the broader cultural war within this society. That has been seen in the flag protests of 2012 outside Belfast City Hall, and the present impasse regarding what seems like the very straightforward issue of a Language Act to recognise both Irish and Ulster Scots. Some quarters of unionism seem unable to countenance the idea of facilitating a Northern Ireland where the two cultural identities are equal partners. Partly this is because, as in the case of football, unionists fear that nationalists are using the equality agenda as a back door to achieving a united Ireland.

For example some within Northern football would say that players such as James McClean, a Derry boy, would never play for Northern Ireland no matter how much they changed the identity of the national team. Yet, the very reason such players choose to appear in a Republic of Ireland jersey is that they do not feel at home in an environment where they have to justify their identities.

Unionism, in some quarters, has been slow to grasp the reality of what it means to be equal partners in a new Northern Ireland. It is not about accepting the other side as we would like them to be, such as those Catholic footballers who agree to wear a poppy and stand for the British anthem.

Accepting the 1998 agreement means acceptance of those such as McClean and Ballymurphy Boys, Derry Girls or Fermanagh folk who see Irishness as an integral part of their identity. Until such an acceptance of diversity is accommodated, the political culture of Northern Ireland seems destined to remain trapped in times out of place with the roadmap set out two decades ago.

Paul Breen is a Senior Lecturer in the University of Westminster who writes widely on topics related to education, sport and cultural identity with further details of work and publications available on Twitter @CharltonMen

This article forms part of #Agreement20, an academic public engagement project organised between the University of Salford and King’s College London, featuring a conference hosted by the Irish World Heritage Centre in Manchester and funded by the Department of Foreign Affairs and Trade.