How books and reading helped me conquer anorexia

After years struggling with anorexia, literature emboldens me to tuck into the local food 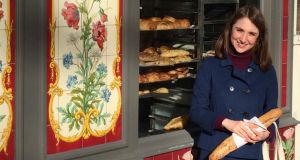 ‘The Louvre does make you hungry’: Laura Freeman at the boulangerie

When Madame Bovary is in love, she eats cherries and cream. She pours the champagne too high in her glass and lets the froth run over her fingers. She tries pomegranates and pineapple for the first time, and closes her eyes as she eats maraschino ice from a cockleshell. Repenting her adultery, she fawns over her husband, Charles, with home-made pistachio-cream.

When Madame Bovary is out of love – or, rather, when her lovers are out of love with her – she picks and pokes at food. At supper, it seems as though “all the bitterness of life was being served up on her plate”. While Charles has his evening stew, she nibbles a few nuts.

Appetite is, for Emma Bovary, bound up in hope. When there is something to hope for – an affair, an escape from good, kind, boring Charles – she is hungry, sensuous, eager for quail and lobster. When she is thwarted, when life is forever penny-pinching routine, she can barely bring herself to eat bread and jam.

I read Flaubert’s Madame Bovary again at the beginning of this year, having moved to Paris with my partner, Andy. He has started a new job; I have packed up my laptop and followed. “How do you say: ‘freelance journalist’?” I asked the greengrocer, who helps me with vocabulary as he weighs pears and celeriac. “Journaliste freelance,” he said, from behind the scales. That, at least, was easy.

Other parts of the move have been less simple. I have been green with homesickness. I miss my mum, my dad, my brother, my routine, my walk in the park each morning. I stomp up and down the Tuileries and long for Kensington Gardens.

At times I have found it difficult to eat. This is an old, bad habit of mine. For years, I was ill with anorexia. In my teens, I starved on peas and scraps of tofu. In my 20s, I began to eat again, my appetite stirred by wonderful descriptions of food in books: Siegfried Sassoon’s boiled eggs on frosty mornings; Charles Dickens’s “haystacks” of buttered toast; Virginia Woolf’s apple tart and midnight biscuits. It is an awakening I describe in The Reading Cure: How Books Restored My Appetite. (“Dans toutes les bonnes libraries,” as Miles Kington might say.)

At home, shopping at familiar shops, cooking in my own kitchen, I have learned to look after myself. To eat three good meals a day and tea and toast in between. Here, I am adrift.

I used to have terrible trouble on holidays. At 19, I went around Italy eating cereal bars for breakfast, lunch and dinner. On a good day, I’d try polenta or prosciutto from a salumeria. On a bad one, it was Frusli all the way.

Over the years, I have become more brave. I prime myself before I go with reading. Before Andy and I flew to Japan last year, I stockpiled novels by Junichiro Tanizaki and Yukio Mishima. I read Kakuzo Okakura’s Book of Tea – a treatise on cups of matcha, sencha and the pink and chewy aduki bean sweetmeats served with them.

I worried that we would land in Tokyo and I would lose my nerve and eat nothing.

Tanizaki made me bold. In Some Prefer Nettles, he describes lacquered bento boxes flecked with gold and packed with sake and sushi for a picnic at a puppet theatre. The pale omelettes and white rice strike Kaname, our leading man, as pure and tempting against the barbarous reds of the stage and stalls. He muses: “Japanese food is meant to be looked at and not eaten, people sometimes say. Perhaps they are right if they are making fun of the formal banquet carefully laid out on its trays. But here the colours were more than only pleasant to look at; they worked on the appetite, made even the unremarkable rice and pickles seem a little more exciting.”

Tanizaki certainly worked on my appetite. Our guidebooks taught us to say: “I’ll have the set menu.” This served us well: at hole-in-the-wall dumpling-booths in Tokyo, and at kaseiki feasts in Kyoto.

I warmed to the sushi chef in Tanizaki’s The Makioka Sisters – a glorious, sweeping, sad, unputdownable book – who tells Yukiko, the shyest of the Makiokas: “Eat it up, young lady, eat it up.”

“But the thing is still moving,” she protests.

“That is what makes it good.”

Poor Yukiko fears she will be haunted by the ghost of the still-wriggling fish. The chef calls it his “dancing sushi”. Nothing I ate was still dancing, but, sinews stiffened by Tanizaki, I braved eel and cockles and crab and quivering abalone, a great delicacy, looking unnervingly like a human ear, fleshy lobe and all. The Makiokas’s family doctor prescribes clam broth to cure all ills. At a cafe in Atami I slurped buckwheat noodles in clam soup salty with konbu seaweed.

In Paris, I have been trying the same medicine. After the first weekend when, unable to sleep in a strange bed, resentful of our poky kitchen, I wanted to eat only porridge, I began my reading. First was Ernest Hemingway’s A Moveable Feast. In dispatches from Paris cafes, he writes of foie de veau and pommes à l’huile and oysters that “cringe” under a squirt of lemon. He eats roast chestnuts from a brazier. So did I. There’s a man who griddles them over coals by the Louvre. Better than a cereal bar, when I’m flagging from a surfeit of art.

In England potatoes seem so often to taste of nothing very much, to be mulched and over-boiled. Here, I have been eating them by the dozen.

The Louvre does make you hungry. I’d done a good stint one morning, hours of note-taking in front of altarpieces. When I came to the Dutch galleries and Willem van Mieris’s painting The Cook, I took one look at his carrots, cabbages and the reddest of chops, and thought: “Right, lunchtime.”

I am newly partial to Hemingway’s pommes à l’huile served with sharp, yielding, marinated herrings. In England potatoes seem so often to taste of nothing very much, to be mulched and over-boiled. Here, I have been eating them by the dozen. Elizabeth David explains it in French Provincial Cooking. Mum lent me her copy before I left, the pages dog-eared at recipes for poached pears, strawberry cream and Fromage de Fontainebleau. Of potatoes, David writes: “It is far from easy to make a good potato salad without the right variety of potatoes, and it is a curious fact that in England, where the potato is considered such an essential daily food, it is next to impossible to find those long-kidney-shaped waxy potatoes which are grown on the Continent and which are the only ones which do not collapse in the cooking.” At the greengrocer, you can buy kidney-shaped pommes de terre by the barrel, and at Richard Lenoir market there are brushes to scrub off the mud.

When snow fell three inches deep on Paris in the first week of February I read Georges Simenon’s A Maigret Christmas. Following Madame Maigret, I bought warm croissants from the bakery. And thanks to the American food writer MFK Fisher, I tried the “l’indétrônable” (un-dethronable! unimprovable!) tarte tatin on a bistro menu.

I have not got along with Françoise Sagan. In Bonjour Tristesse and Un Certain Sourire characters say: “Shall we have dinner together tomorrow?” or “Let’s go for lunch.” Not a whisper of what they ordered. I found it maddening. How could couples in the throes of passion escape to Cannes for a fortnight, and never gulp even one oyster, one spear of asparagus?

Sagan likes instead to tell you how skinny her heroines are. “Come and look at this grasshopper, she’s so thin,” says Raymond, father of Cecile, who breakfasts on coffee and a single orange in Bonjour Tristesse. The working title of Un Certain Sourire was “Solitude aux hanches étroites” – “Loneliness with Narrow Hips”. Given a choice between scrawny Cecile and Ma and Pop Larkin who, in HE Bates’s A Breath of French Air, eat saucisson and un filet bifteck avec pomme frites (you have to imagine David Jason doing his Del Boy on the Riviera accent), I am already tucking in my napkin for lunch with the happy, hungry Larkins.

The Reading Cure: How Books Restored My Appetite, by Laura Freeman, is published by W&N

The Movie Quiz: What is the completely made-up tagline for ‘Jaws 19’?
Real news has value SUBSCRIBE