GAA vs media: Decades of boycotts, blacklisting and libel 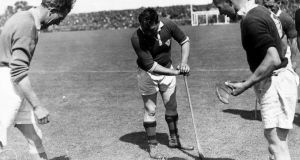 The recent spats between sporting organisations and the media may look like a radical departure from the friendly and mutually beneficial relationship that always existed between athletes and journalists.

But in decades past, antagonism between journalists and the GAA was all too common, much of it stemming from that organisation’s desire that reporters turn a blind eye to the more ‘physical’ aspects of its games – with repercussions for those who reported on the spats and fouls that characterised the intense competition between teams.

Boycotts, blacklisting and libel writs were, unfortunately, all too common.

In his autobiography, reporter John Healy, then on the Western People, recounts being asked to leave a victory dinner in Castlebar when Mayo won the All-Ireland football final in 1950. His offence was to have written about ‘dirty play in Mayo GAA games’.

When the county board threatened to sue for libel, the paper’s editor Fred de Vere, having checked Healy’s sources, challenged the board to go ahead with the action. The board backed down but passed a resolution banning Healy from all future games.

Radio Éireann conspired in the myth of unstained sportsmanship, with Michael O’Hehir describing the beautiful sunny weather whenever the players began knocking the bejaysus out of each other

As remembered by one journalist, Alan Bestic of the Irish Press, the GAA fostered a sense that ‘all Gaelic games players were clean-limbed youths, drenched with fine Irish sportsmanship and incapable of mean thought or action, while those who played “foreign” games were a bunch of scurrilous, knuckle-dustered thugs with hate in their hearts for their opponents’.

It was as if the GAA, as another journalist, Michael Finlan, put it, ‘could not abide any suggestion that the national games . . . might not always be activities of impeccable sportsmanship and almost pristine purity’. The result was that media coverage of unpleasant aspects of the games was sanitised.

As recalled by Finlan, Radio Éireann, which began broadcasting GAA games in 1926, ‘conspired in the myth of unstained sportsmanship, with Michael O’Hehir describing the beautiful sunny weather whenever the players began knocking the bejaysus out of each other’. The same self-censorship applied to newspapers. As recalled by Alan Bestic:

I remember, for instance, seeing members of a team, beaten in the All-Ireland Gaelic football final, thumping the starch out of the referee as they came off the field, while the victors tried to fight them off. This unpleasant yet understandable scene took place in front of the stand which held the President of Ireland Seán T. O’Kelly; the Prime Minister Éamon de Valéra, with several members of his Cabinet; the Apostolic Nuncio, Dr Paschal Robinson, with several members of the diplomatic corps, plus a fair coterie of bishops. It was a dramatic incident; but not a line about it appeared in the newspapers next day.

Those who transgressed this code of silence suffered: Bestic recalled one photographer who tried to record an altercation on the field but who ‘had his camera smashed to bits; and he had collected a fair hiding too’. In 1961 John D. Hickey of the Irish Independent wrote frankly of the physical altercations involving Cork’s captain Christy Ring during that year’s Munster hurling final:

The exchanges were always mercilessly hard but there was only one flare up of any consequence when John Doyle and Ring became enmeshed in a catch-as-catch-can, or punch-as-punch-can on the ground eighteen minutes after the restart. That was unseemly enough but it was deplorable that Ring, after arising, should strike Tom Moloughney with his hurley, causing the Tipperary man to be assisted from the pitch with a head injury. Numerous other playes became embroiled but the incident would hardly have qualified for mention but for Ring’s action.

In contrast, The Irish Times merely noted that ‘displays of temper on both sides erupted into nasty incidents on two occasions’. The Irish Press noted that the game was marred by ‘an unsavoury explosion of fisticuffs’, that Moloughney was struck by a hurley and that the game ‘added no lustre to Ring’s reputation’, but unlike Hickey’s report, it did not explicitly link Ring with the assault on Moloughney.

The GAA did not take such frank reporting lightly. The following month Hickey was refused admission to the press box of the Cork athletic grounds when he showed up to report on the Cork county senior hurling final.

When the NUJ threatened to impose a ban on reporting any games in Cork, one member of the country’s GAA board described the union’s attitute as ‘impertinent and insolent’. Threats of legal action followed and at least four libel actions were initiated on the basis of Hickey’s report.

After several months of negotiations involving Michael McInerney of the NUJ and representatives of the Cork county board, both sides released a statement that noted Ring’s name ‘should not have been singled out’, that all libel actions had been withdrawn, and that the union’s threat of action and the county board’s ban on Hickey had been lifted.

But, as Bestic observed, by the late 1960s, sports journalists, empowered by the televising of GAA games from 1962 owards, were less shy in pointing out foul behaviour on the field.

While RTÉ television, as recalled by Finlan, initially ‘chose to aim its cameras at the cheery faces of the crowd on Hill 16 [anytime] tempers got out of hand in the heat of play’ such tactics simply indicated that something serious was happening on the field.

Gradually, altercations began to be televised and reported on. In 1968 Bestic noted that ‘the newspapers are writing openly that hurling in particular is becoming so dangerously dirty that it threatens to kill itself’. But it took time for the GAA to adjust to such candid coverage.

In May 1968, when reviewing that year’s national league hurling final between Tipperary and Kilkenny the Irish Independent’s John D Hickey noted that the game had produced ‘eight scandalous minutes [of] acts of violence that must have sickened every spectator . . . with a shred of respect for the precepts of law and order, never mind the canons of good sportsmanship’.

Mick Dunne of the Irish Press noted that the game was ‘regrettably tarnished by a half-hour that amounted to the most despicable and disgraceful exhibition of outright viciousness witnessed in Croke Park for many years’. Rivalry between the teams had ‘exploded into such maliciousness that the hurling turned into sickening savagery’.

Similarly, Paddy Downey of The Irish Times noted that ‘the “needle” which has marred a number of recent matches between these counties again thrust up its ugly and malicious spike’. The Tipperary GAA county board responed by prohibiting selectors and players from giving interviews or information to six named sports journalists, including Hickey, Dunne and Downey.

In response, the NUJ’s Dublin branch instructed its members not to report, comment on, or handle any GAA news emanating from Tipperary and declared that it deplored the county board’s attempt ‘to curb objective comment’.

The national titles did not report on Tipperary’s training or preparation for that year’s All-Ireland hurling final against Wexford, though the final itself, which Tipperary lost, was reported on. Immediately after the final the Tipperary county board lifted its ban but, not being officially notified of this, the NUJ extended its ban to cover any game involving a Tipperary team.

It was December before the NUJ lifted its ban, expressing its belief that it had ‘demonstrated that Irish journalists will not tolerate abuse or intimidation from any organisation or individual’.

The journalist is not a public relations man and it is not his job to present a favourable image of public men, of organisations and events; the warts must be shown

Reviewing the situation some weeks later, the NUJ’s Dublin branch chairman, Maurice Hickey, observed that because of a misunderstanding of the journalist’s functions, people were often aggrieved at candid criticism in the press because they felt ‘the side had been let down’. Such sensivities were, he contended, at the heart of the Tipperary county board’s dispute with sports journalists.

Keen to disabuse organisations of these sensitivities, Hickey declared that ‘the journalist is not a public relations man and it is not part of his job to present a favourable image of public men, of organisations and events all the time; the warts must be shown when necessary’. He also observed that it was the branch’s intention to work more closely with management and editors in relation to professional matters.

All this, of couse, is a world away from sporting organisations now owning their own media – a phenomenon that might just ensure that the uglier side of sport is once again hidden in plain sight.
Mark O’Brien is the author of The Fourth Estate: Journalism in Twentieth-Century Ireland which will be released in paperback this June