Bobby Kennedy: A Raging Spirit lacks a critical eye but depicts a man ahead of his time

While Chris Matthews' book eschews any negative portrayals of the Kennedys, it presents a vivid and poignant account of the senator 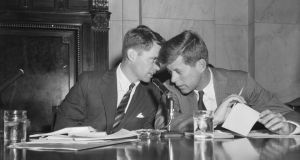 This year marks the 50th anniversary of the death of Robert Kennedy, the senator and former attorney general who was shot dead in Los Angeles at the age of 42, less than five years after his brother John was assassinated. The Kennedy family continues to exert a fascination over the American public. As Chris Matthews puts it in the preface, the Kennedy brothers seemed to symbolize the zeitgeist of that time: “All that youth and hope and sense of change: you couldn’t be alive and not feel it.”

Matthews is an American TV anchor, presenting the popular weekday programme Hardball on MSNBC. This biography is peppered with his own personal memories of the time – participation in his first anti-war march in Washington, or his departure for Africa as a member of John F Kennedy’s peace corps after Bobby’s assassination, “leaving a country that had once again been robbed of a leader.”

While the book lacks a critical eye – Matthews is something of a Kennedy acolyte and wrote a bestselling biography of John F Kennedy – it succeeds in presenting a vivid and ultimately poignant account of a man who evolved from his association with his brother to become a presidential hopeful in his own right.

Matthews traces Bobby’s life from his wealthy east coast upbringing to his spell in London during his father’s posting as US ambassador to London. The seventh of the Kennedy children, a picture emerges of a shy, introverted child who strove for recognition from his domineering father. But it was during his childhood that the seeds of a ferocious tenacity were sown, a need to prove his doubters wrong, whether it was training to make the Harvard football team or his desperate desire to follow the lead of his older brothers and see active combat in the second World War.

There is also much for the Irish reader in this book. Matthews (himself a proud Irish-American) highlights the impact Bobby’s Irish-American heritage had on his life and politics, arguing that his awareness of the prejudice faced by Irish Catholics who emigrated to America underpinned his sense of social justice.

But it was Bobby’s political association with his brother John that was to define his life. At first it was an unlikely collaboration. John, eight years his brother’s senior, had to be convinced of his brother’s usefulness. Bobby, busily working in the Justice Department in Washington, was also reluctant. But once co-opted to run his brother’s senate campaign, the partnership worked.

Bobby soon became “the enforcer, the heavy, making his presence felt in situations where Jack needed to remain at a distance.” He developed a reputation for ruthlessness, making enemies along the way, not least Lyndon Johnson, his brother’s running mate in the 1960 election who would later accede to the presidency following Jack’s assassination.

Jack’s presidential victory served to boost Bobby’s own career. The younger Kennedy was appointed attorney general at the age of 35. Aware of a possible backlash, the new president leaked the information to The New York Times as a way of testing the water – a rare glimpse in this book of the cynicism of the Kennedy machine.

The book recalls Bobby’s central role in the key events of his brother’s presidency, from the Cuban Missile Crisis to his decision to send in troops to protect black student James Meredith at the University of Mississippi in 1962 as riots erupted. Bobby’s empathy with the civil rights movement was an early indication of his commitment to equality that was to drive his politics later.

Given the enormity of the events of November 22nd 1963, Matthews’ treatment of John F Kennedy’s death is curiously brief, covered in just a page or two. Instead he moves on to the remaining four and a half years of Bobby’s life, including his election as senator for New York and his tortured decision to contest the Democratic presidential primary before his death in June 1968.

‘Ahead of his time’

He describes Bobby’s evolution into a politician driven by conscience and compassion, a gradual shift that was prompted not just by the devastating personal loss of his brother, but also the appalling backdrop of the Vietnam War. While this timely biography eschews any of the negative portrayals of the Kennedys that can be found in works (such as Seymour Hersh’s 1997 expose of John and Robert Kennedy), it does depict a man ahead of his time.

One quote captures how Robert Kennedy accurately predicted the election of Barack Obama, decades later. Recalling in the 1960s  how his great-grandfather had arrived to a United States where “the Irish were not wanted,” he reflected: “Now an Irish catholic is president of the United States. There is no question about it – in the next forty years a Negro can achieve the same position my brother did.”

Bobby Kennedy may not have lived long enough to fulfil his own presidential ambitions, but he was one of the few people who dared hope that one day an African-American would be elected to the highest office, against all odds.