Cork in the 80s: documenting a difficult decade in the city’s history

Inspired by profiles of Detroit and New York, Michael Moynihan tackled the city of his youth 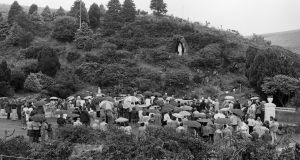 Crowds at the statue of the Virgin Mary at Ballinspittle, Co Cork in 1985. Photograph: Jack McManus

A line from Philip Larkin was on my mind while working on this project. Not the famous reference to his parents, but an aside about beginning to say “thirty years back” about your own life.

Crisis and Comeback: Cork In The Eighties is the book I wrote about what was happening in my home place 30 years back. It details what we thought of at the time as normal life, but in retrospect it was a chaotic time of huge upheaval. The city was shocked by the closure of traditional industries which cost thousands of people their jobs and the ramifications spread outwards from the then-familiar image of middle-aged men walking through the factory gates one last time.

In Cork at that time here were controversial elections and religious hysteria; an entire hospital was shut down, and the city’s breweries threatened with closure. From the disappearance of the city’s cinemas to the arrival of international terrorism, Cork was in turmoil during the eighties.

In the middle of the decade it was decided to celebrate the 800th anniversary of the city getting a royal charter and an air show was planned to kick off 1985 as a year of hope and celebration.

It had to be cancelled due to poor visibility, but thousands of people still came to the airport. It was that kind of decade. That kind of city.

The book grew in part out of an interest in American nonfiction, and a couple of stand-out books in particular. Jonathan Mahler’s Ladies And Gentlemen: The Bronx Is Burning is an incredible portrait of New York City in the mid-seventies, and 1977 in particular. It was a single year which saw the intersection of any number of headlines: a mayoral election and the city’s finances going into meltdown, the Son of Sam murders and the New York Yankees winning the World Series, a catastrophic power cut and the growth of disco. The only knock against the book was the outsize nature of the material, each narrative strand worthy of a HBO mini-series on its own.

David Maraniss’s Once in a Great City: A Detroit Story was a sharper spur. Maraniss tells a less dramatic story than Mahler’s but it’s one with a longer afterlife.

His account covers a period in the early sixties when Detroit, then wealthy on a car industry at its peak, seemed destined to flourish forever but was doomed by forces – economic, demographic, historic – just visible on the horizon at that time. I was so impressed I emailed my congratulations to Maraniss, who noted in return that the Detroit district of Corktown was so named for the Leesiders who had settled there . . .

These impressions were drifting around the back of my mind when they were joined by some apparently random stories.

The Examiner carried a lengthy interview with Mick Hannigan in which he mentioned in passing that the Cork Film Festival had almost gone to the wall in the mid-eighties as the economy bottomed out, but its sole asset – the film projector – had been saved by a donation from Ford, then shutting down its factory in the city.

At around the same time I heard a radio item about Apple founder Steve Jobs, who had recently passed away, and one of the guests on the programme – woefully underused, as it happens, in favour of another contributor waffling about the iPhone – was Dan Byrne, a Cork native who had worked with Jobs when Apple set up shop on Leeside.

When I learned that Dan had been an engineer in Ford’s Cork plant before eventually becoming Apple MD the facts were no longer random but had started to connect. I tracked Dan down for a coffee, and before the spoons were finished stirring I knew there was a story here worth a book.

Having left school in 1985, many of the events described in the book were the soundtrack to my own teenage years. Because of that there was nothing unusual at the time about the chaotic closures, the mass unemployment, the hysteria about moving statues. With no previous decades of tranquility to compare the upheaval to, as kids we saw the times as completely normal. As Conal Creedon puts it in the book, the teachers of the time felt sorry for us because we had missed the good times.

Now, looking back, the strangeness is clear in many different ways. The invisibility of women is one obvious example, and I was grateful to Kathleen Lynch and Ronnie Dorney for spelling out just how hostile a decade the eighties was for women. Sometimes the discrimination was subtle but no less potent for that: Joe Tuohy, who had a long and distinguished career as an engineer going back to the sixties, points out that it was only in the eighties that he found himself in meetings run by women.

The Detroit described by David Maraniss sank into eventual bankruptcy and urban decay, but Cork rallied and is now a thriving city again. That was a significant element in writing the book as well, to describe the comeback after the crisis.

The credit for Cork’s recovery from that disastrous decade can be shared around, from the IDA identifying the obscure technology company in California which would become one of the most successful in history to the Cork IT lecturer who secured thousands of jobs for the region by having the nous to accompany an industrialist to his waiting car.

More than one contributor also stressed the importance of self-belief to the city’s recovery. Those outside Cork will hardly be shocked to learn that the natives believe there is nowhere like the Rebel County, but emerging from the slough of despond required more than saying “Cork, boy”, as Theo Dorgan notes.

The self-belief joined with determination and enterprise, and the recovery came into effect. It was a privilege to trace the story.
Crisis and Comeback: Cork In The Eighties by Michael Moynihan is published by The Collins Press