Money, Troubles: a history of the country house and the Irish State 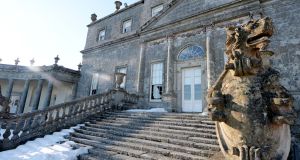 In 1929, the Palladian-style mansion in Co Wicklow, Russborough House, was offered free of charge as a gift to the nation but it was declined as too costly to maintain. Photograph: Alan Betson / The Irish Times

Muckross, Russborough, Bishopscourt: these stately Irish homes have attracted controversy since the founding of the Free State. Many of these white elephants – extravagant but ineffectual gifts that cannot be easily disposed of – were variously offered for sale or as free gifts to the State from 1922 to the 1970s; during the same period, conservative estimates suggest that hundreds were demolished or abandoned to ruin. In 1929, the Palladian-style mansion in Co Wicklow, Russborough House, was offered free of charge as a gift to the nation to be used for some worthy national purpose. After much consideration by the first Irish Free State government, it was declined. This decision was made despite the President of the Executive Council, WT Cosgrave, being ‘very much impressed by its beauty of architecture and situation’. Over 30 years later, Bishopscourt, a stately home in Kildare, was also offered to the State for some worthy national purpose. One suggestion was that the house might make an ideal location for high-profile visitors to the country. The offer was ultimately refused. By contrast, in 1999, Farmleigh in the Phoenix Park was acquired by the Irish government as a residence for visiting guests of the nation and was restored by the OPW, costing the State over €29 million.

Attitudes to the country house in Ireland have long been complex and nuanced. In 1961, one TD even went as far as to say in a Dáil debate that ‘those old houses should be blown sky-high. They were built with slave labour and the blood of decent men. Two or three of them were blown up by the Land Commission in County Meath and I was delighted.’

The fate of these houses has been directed not just by economic, social and political realities, but also by the personalities in power during particular periods, and, significantly, by the real power brokers in the background: civil servants. Erskine Childers, in his role as the minister of lands from 1957-9, saw value for the State in aiding the survival of the country house. He initiated an attempt to form a whole-of-government approach to the issue but was blocked at every turn by government officials and civil servants who were either unable or unwilling to consider new lines of policy or a loosening of the purse strings at the Department of Finance, the OPW and the Land Commission.

As a fledgling State, successive governments struggled to remove themselves from the mire of bitter resentments that had endured since War of Independence and Civil War days. By the 1950s, the country’s emigration haemorrhage and economic stagnation dominated not only politics but, more importantly, the finances of the State. In such environments across the decades, any expense incurred by the State in maintaining country houses would have been, at best, unpopular. In reality, these private historic homes simply never featured highly enough on government agendas to be even fully considered in terms of forming a government policy on them.

The accession to the EEC in 1973 was hugely influential for the country’s view of heritage generally. The temporal, as well as psychological, remove from entrenched Anglo-Irish associations meant that, after 1973, heritage and the country house began to feature more prominently on government agendas. By 1999, Ireland was in the throes of an economic boom and the significant sum of €29 million spent on Farmleigh went almost unnoticed.

Looking at the history of the country house in Ireland through this lens shows that the story of the State and the country house in post-independence Ireland is a difficult one to tell. As with much history, it is neither black nor white, but grey. In 1922 the State was struggling to prove that an independent nation could survive despite civil war and rank poverty. The land question, Anglo-Irish relations, class and religious divides, the Troubles and the domineering personalities of politicians and civil servants are all significant factors in the fate of the Irish country house. In 1929, with the State on its knees politically, socially and economically, even accepting the financial burden of a country house as a gift was too great a risk, but in Celtic Tiger Ireland, the acquisition of Farmleigh did not raise many eyebrows. Economics, then and now, has been one of the most important factors influencing governmental attitudes to the survival of this part of our shared heritage.
Emer Crooke is author of White Elephants: The Country House and the State in Independent Ireland, 1922-73 (UCD Press, €40). It will be reviewed by Christopher Ridgway, curator of Castle Howard, on January 5th in The Irish Times