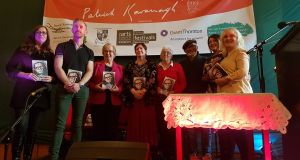 Some of the poets who contributed to The Lea-Green Down

This November, Offaly poet Connie Roberts read her poem My People at the Boston College Conference, Towards Transitional Justice. Roberts spent her childhood in various institutions, experiences she wrote into poems which subsequently won her The Patrick Kavanagh Award (2010) with her debut collection, Little Witness (Arlen House).

Although a fellow Offaly woman, it wasn’t until July of this year I met Connie for the first time in a quaint teashop on New York’s Lower East Side. It was my pleasure that day to hand over her contributor’s copy of The Lea-Green Down, an anthology of response poems to the poetry of Kavanagh which also includes the originals. Her response poem takes its title from Kavanagh’s version, using his visual template to create a scaffolding for a contemporary work, brimming with social and political energies. Roberts speaks for those who have suffered abuse, asking the question; “Can you blame them for wanting/wrongs righted?”

In similar vein, Jean 0’Brien’s Child, in response to Kavanagh’s To a Child, is dedicated to the lost children of Tuam’s Mother and Baby Home. Her closing lines are prophetic in light of the Government’s recent decision to exhume and identify these children: “The unforgiving sky is full of stars/the dome of dank earth/is full of missing children./Hush, we know you are lost child/we will find you.”

Throughout The Lea-Green Down, which features more than 60 contributing poets (established, emerging and those publishing for the very first time) are responses which take the Kavanagh originals as a starting point. As President Michael D Higgins said in a speech he made at the Kavanagh Centre in Inniskeen in 2014, it’s a fact “that if you wanted insight into the truth of Irish existence, you had to turn to literature”. Such truths are in abundance between the pages of The Lea-Green Down in poems that offer insight into a rapid changing Ireland 50 years on from the death of Patrick Kavanagh, himself a poet who never shunned the hard truths.

The plan to publish this anthology through my small, independent press, Fiery Arrow, was put together in mid-2017. I wasn’t sure however, if the idea would gather momentum. It would require a fair amount of commitment, not only from myself, but from a range of poets (I wanted to be as inclusive as possible). Right from the beginning, there was huge enthusiasm for the task. The first poem came to me within hours, the Kavanagh poem, The Weary Horse ably responded to by Joan Power’s The Garden. Her entreaty to Kavanagh regarding the redemptive power of language is in her opening lines: “Oh pour me poetic redemption, Paddy/to ease this new banality of living/stripped of wonder or beauty./Pass me the bones of your words/for there is no chink of light,/no wink and elbow language of delight/only the Babel of Google/to barrow my brain/with dreeping dung.”

The arrival of The Beast from The East ensured the work got done. While the country ground to a halt, poets all over the land were revisiting the works of Kavanagh and being beguiled anew. Though the storm raged, I received a blizzard of new poems. Reading those poems as they came in was nothing short of miraculous. They kept me warm although temperatures dropped.

The Lea-Green Down as title was ready made in one of Kavanagh’s early poems, Ploughman: “I turn the lea-green down/Gaily now,/And paint the meadow brown/With my plough.” It’s a perfect metaphor for how the poetic process itself turns the lea-green of imagination into poetry, the pen being the plough. Included in the collection is a poem and a significant essay by Gerard Smyth in which he makes the point that “To the young poets who gathered around him in Dublin in the 1960s, Kavanagh transmitted a new message: the need to push the boundaries of Irish poetry, the necessity of renewing tradition rather than echoing it.” Smyth’s poem Carnaross: A May Evening, in response to Inniskeen Road: July Evening, describes a typical evening of dance in a country setting. Evocative lines include : “Later when the singer is gone, his wild accordion/back in its box, his songs will linger/and those still standing continue to dance/to the ghost of a tune that’s an old country waltz.”

Mary 0’Donnell’s The Blackbird, God Almighty and Allah, mourns and remembers the dead children of Syria, murdered by Bashar al Assad. Her powerful poem begins: “There you are again this bitter spring,/taking position at crown of birch./You hold forth like God Almighty,/or Allah, fresh arrived to change terrible places/to green-shook and calm.” Geraldine Mills in I Keep Looking, describes a mother’s anguish over a daughter lost to the streets, her lines renewing Kavanagh’s rhythms: “Every young girl I see/in school uniform or knee-torn jeggings/might some day say to me/I am still your daughter.” Pat Boran’s Pocket Watch comes in response to Gold Watch and describes memory as a museum, filled with things “he can’t let go of or that won’t let go of him”. Lani O’Hanlon’s The Traveller’s Wife (in response to Kavanagh’s Tinker’s Wife) describes a man from the travelling community coming to her door after the death of his wife. He is offered a pancake in lieu of money, an offer he refuses because “She loved them you see./He’d always take one out/to her waiting/in the white van,/all honeyed up/and warm from the pan.”

Una Agnew, A Kavanagh scholar and academic, has been a steadfast supporter of this publication. Agnew launched the collection in her customary articulate way and also contributed a poem Swans on the Canal, a response to Lines Written on a Seat on the Grand Canal, Dublin. Agnew’s reflection on Kavanagh’s being commemorated near water is lyrical and moving: “And bridges resonate with filtered light/Shedding a fractured aura on the waters/That carry myths and legends of your past/And bring you home in triumph, safe at last.”

In Memory of my Mother is a poem where Kavanagh remembers going to the market town of Carrickmacross with his mother, a poem where imagination is described as “the oriental streets of thought”. Ivy Bannister’s In Memory of my Sister takes Kavanagh’s poem as the starting out point of her journey to reclaim the sister that she tragically lost in a plane crash, September 1998. The poem begins: “It’s on the Atlantic coast/that we meet – you float in /on the waves, your face lit/by this magic place./Where salt embraces strand,/water washes our feet,/and there behind you/the tow headed children/you longed for/rise from the sea.” Both Kavanagh and Bannister use memory in devastating ways to recapture what’s been lost. Both poets, however, heal the pain of loss through the redemptive gifts bestowed through language. Kavanagh takes his mother again through the shops and stalls and markets while Bannister melts away the “bruised black past” through the act of recalling.

As a poet, how do I relate to Kavanagh? Poems like A Christmas Childhood and Ploughman remain personal favourites, sharing as they do glimpses of the divine. Kavanagh’s railing against institutional structures reminds me of another poet I would always want to read, William Blake. Kavanagh shared with Blake the desire to show reality as it was and not in a sentimental way (which Kavanagh abhorred). Thus, The Great Hunger (published by Horizon in 1942) reveals the devastation and loneliness of trying to eke out a living from the land (through the prism of a lone voice, Paddy Maguire). The sonnet I respond to in like kind is Come Dance with Kitty Stobling. In Praise of the Dance, contrary to Kavanagh’s “No, no, no,” opens with “Yes, yes, yes.” In Praise of the Dance writes the source of my first poetic rhythms, my mother’s sewing machine. “I left behind my mother’s rhythmic Singer sounds/Her quick-quick-slow-quick time, her patterned rows.”

While there are over 60 poets in The Lea-Green Down, it’s fair to say that if resources allowed, I would have liked to publish a much larger work. There are unintentional omissions. Trying to catch what Kavanagh once described as “a standing army” of poets would prove futile in this instance. But that said, the poets who are here represent every county in Ireland and they have undoubtedly succeeded in creating a legacy which will stand the test of time.

Poets included in the Lea-Green Down are as follows:

The inclusion of Patrick Kavanagh’s poems is by permission of The Patrick Kavanagh Trustees via The Jonathan Williams Literary Agency. The Kavanagh Poems are taken from Collected, 2004, edited by Antoinette Quinn and span the years, 1929-1959.