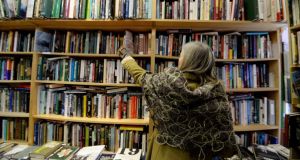 Bursting shelves in The Last Book Shop on Camden Street: Book sales in Ireland are up by 7 per cent this year. Photograph: Alan Betson

Store manager of the Winding Stair Maire Griffin flits around book-laden tables, clambering over a dog lead, to add another text to the growing pile in one customer’s arms.

The popular bookshop on Lower Ormond Street on Dublin’s north quays is a hub for book fans and international tourists seeking a literary window into Irish culture.

“Seamus Heaney’s 100 Poems has been really popular. I’ve been encouraging everyone to go to the Heaney exhibition at the National Library,” says Griffin.

“You can really influence what people buy because there’s quite a talkative vibe here, which you wouldn’t get in the bigger stores,” she goes on. Books, she believes, are an experience.

The man with the dog lead over which she clambered, and the attached hound, butts in: “I love it here because it’s one of the only places you can bring your dog to.”

Griffins is not alone in believing that readers have reached “the peak-Kindle point”, where they have now begun to resume the love affair with print, not antiseptic e-screens.

Book sales in Ireland are up by 7 per cent this year. In the United Kingdom, sales are up by £22 million, according to Nielson BookScan, which gathers data from 6,500 booksellers across the UK.

Meanwhile, ebook sales, once the biggest threat to high street booksellers, fell by 4 per cent in 2016 and a further 3 per cent in 2017, as part of a 17 per cent drop in Britain’s overall ebook consumer market.

“We feel the impact of online markets at this time because they are cheaper on price, but we don’t get many people complaining about that. Because we don’t buy in bulk, we go niche,” says Griffins.

The shelves in the Winding Stair are laden with special edition classics, vintage mini-series, Irish literature, old and new, and more recently international books that reflect the growing immigrant population.

“Particularly for children’s books there is increasing demand to show a different range of experiences. Lots of kids are not in your typical Catholic school, so parents are keen to show them the wider world.”

In the back, the Winding Stair has an armchair, a reading lamp and a second-hand book “treasure chest” for bookworms to rifle out a bargain, passing away the hours .

“Like vinyl, reading is fashionable again,” she says. “Suddenly we’re back to the Dead Poets Society days where people are proud to carry a book under their arm.”

Across town, Ranelagh’s tiny outlet, Company of Books, is bustling with shoppers asking for Christmas recommendations. Owner, Gwen Alman knows most of them by name, and by their reading choice.

The store opened in 2009 at the height of the recession and Kindle boom, but business has grown steadily over the years.

“Even during the recession, we found that people weren’t treating themselves to going out, but they would still allow themselves to buy a book.”

This year, Michelle Obama’s memoir, Becoming, and The Milkman, the Man Booker prize-winning novel set in 1970s Belfast, have been flying off the shelves.

“The Man Booker can have a huge impact on sales. It also helps that Anna Burns is from Belfast, as people like to support local.”

For a Christmas gift, she recommends Eleanor Oliphant is Completely Fine, because it “appeals to readers and non-readers. It’s a good one if you haven’t read for a while.”

The key to running a good bookshop, she says, is being an avid reader yourself.

“Whenever my staff get a quiet moment, I encourage them to read, so they can recommend honestly.

“Amazon has all sorts of algorithms, but those are only going to point you to the bestsellers. We are able to be so much more personal.”

“There are a lot of American tourists staying around the area who are used to buying online. Their reaction to seeing an independent bookshop is incredible.”

Is running an independent bookshop an easy task?

“Not at all. It can be hard to compete, but sometimes being small is beautiful.”