Chamber Music: About the Wu-Tang review – Engaging and edifying 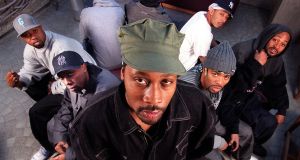 Book Title:
Chamber Music: About the Wu-Tang (in 36 Pieces)

I lost my hip-hop virginity one cold night in winter 2015. I was at the Ringsend home of some friends, lights were dimmed, ale was flowing, and I was given a choice: should we listen to Wu-Tang rapper Gza’s album Liquid Swords or to an album of John Dowland lute compositions? With apologies to the Elizabethans, I went for Door No 1. The needle hit the groove; a crackly kung-fu film sample started; and shortly after, to Rza and Gza’s rhymed interplay, I entered the house of Shaolin. From there I stepped into hip -hop’s wider demesne.

The Wu-Tang Clan, subject of Will Ashon’s Chamber Music, is a 10-member hip-hop group hailing mostly from Staten Island, New York. Each Wu-Tang Clan member has a distinct rapping style and persona. Method Man has a languorous delivery and pop-culture humour. Ghostface Killah has a manic style with modernist-incomprehensible allusions. Gza has dextrous flow and lithe similes. If this is beginning to sound like how the Beatles were sold (Paul, the cheery one; George, the brooding one), that’s no coincidence. If the Wu-Tang’s image is that of a gang straight out of The Warriors, that’s no coincidence. And neither is it incidental that the music of these incarceration-class African-American men comes filtered through a personal mythos, wherein deprived Staten Island is re-envisioned as mystical Shaolin.

Declan Kiberd has written of how “post-colonial artists, born as copies, were determined to die originals”. It’s not dissimilar to the situation of African slaves’ American descendants. The tradition of so-called Afro-Futurism, for example, from Sun Ra to Parliament and beyond, has seen African-American artists invent their own techno-futuristic personas in a playful critique of any externally imposed identity. The Wu-Tang Clan follow the same tack. Through inventing and living out their own mythic narrative, they attain through art a freedom that is otherwise – the freedom to name themselves.

Ashon shows how the Wu-Tang mythos derives not only from kung-fu films, which founding members watched at 42nd Street cinemas, but also from the Nation of Islam, which teaches that Earth’s original people were black people “who lived a civilised and enlightened life in the area around what is now Mecca and the Nile valley”. A belief system developed from this, wherein Harlem was renamed Mecca and the creed’s Supreme Alphabet reveals words’ hidden codes: “The almost universal use of ‘G’ (as in Wassup, G?),” Ashon writes, “didn’t originally refer to Gangsta but to God.” Versed in these “Five Percenter” ideas, the Wu-Tang members self-consciously invoke the Asiatic Black Man, “a state of being as well as a physical description”. Doesn’t this recall, in the Irish context, how an average Joe walking around Dublin becomes Odysseus?

Chamber Music focuses on the Wu-Tang’s debut album, Enter the Wu-Tang (36 Chambers), released 25 years ago. Over 36 chapters, Will Ashon does a bravura job at presenting an archaeology of the Wu-Tang Clan, digging around the group to situate it within the larger structures of American society and culture. At times you might prefer a more direct approach. The bald statement, “This book tells the story of the first album made by the Wu-Tang Clan,” for example, doesn’t come until page 24, three chapters in. But by and large Chamber Music is both engaging and edifying. Whether it’s tracing the heritage of Protect Ya Neck’s squealing saxophone sample, querying whether hip-hop appeals to white audiences in the same way as minstrel shows, or analysing Ghostface’s allure (exemplary, Ashon says, of Keats’s idea of negative capability), the prose flows like the blood at a murder scene.