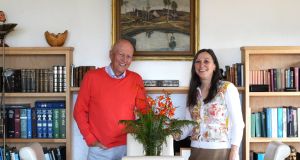 Conor O Clery and his wife Zhanna at their home in the Dublin Mountains. Photograph: Cyril Byrne

Conor O’Clery has won the 2020 Royal Irish Academy Michel Déon Prize for nonfiction for his book The Shoemaker and his Daughter.

By telling the story of his wife Zhanna’s family from the second World War to the fall of the Soviet Union, O’Clery, a former Irish Times Moscow Correspondent, personalises 80 years of Soviet and Russian history, from Stalin to Putin. It is both a compelling insight into life in a secretive world at a seismic moment in time and a powerful tale of ordinary lives shaped by extraordinary times.

Prof Michael Cronin, chair of the Royal Irish Academy’s judging committee, said: “Conor’s book is masterfully written, cleverly and sensitively telling the story of the experiences of his wife Zhanna’s Armenian family and their memories, while exploring 80 years of Soviet history. Any of the outstanding shortlisted authors – Sinéad Gleeson, Caelainn Hogan, Margaret Kelleher, Ian Maleney or Éilís Ní Dhuibhne – would have been worthy winners.”

Minister for Foreign Affairs Simon Coveney congratulated O’Clery and all the shortlisted writers. “The Michel Déon Prize supports modern writers of nonfiction and new artists who seek to develop and strengthen their cultural work. The cultural sector has suffered disproportionately during this pandemic and Ireland is increasingly putting culture at the heart of its relations with other countries, so it is fitting that the Department of Foreign Affairs funds this prize.”

The shoemaker of the title is O’Clery’s father-in-law Stanislav Suvorov, whose successful life in the Soviet Union crashed in 1962 when he was jaiiled for five years for selling his car for a profit. On his release, social shame drives him and his family into voluntary exile in Siberia, 5,000kmfrom home.

“O’Clery is an elegant and scrupulous writer,” wrote novelist Kathleen MacMahon in her Irish Times review. “His consistently excellent reportage is further enriched by Zhanna’s memories.”

O’Clery was a foreign correspondent in Washington, Beijing and New York. He has been twice awarded Journalist of the Year, for his dispatches from Moscow and for his reporting of the 9/11 attacks in New York. He is the author of several books.

The Michel Déon Prize was created in 2018. Déon, one of the most influential French writers of the 20th century, lived in Ireland from the 1970s until his death in 2016. He published over 50 works and won the Prix Interallié for his 1970 novel, Les Poneys sauvages (The Wild Ponies). Déon’s 1973 novel Un taxi mauve received the Grand Prix du roman de l’Académie française and in 1978 he was elected to the Académie française.

The prize was created at the initiative of Ireland’s Embassy in Paris and Ireland’s Honorary Consul General in the South of France, Pierre Joannon. The €10,000 prize is funded by the Department of Foreign Affairs and is awarded in France every second year by the Académie française.