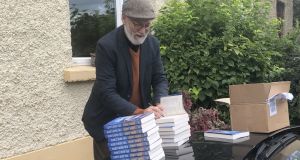 Dermot Bolger: While it was one thing to rewrite my stories for publication in solitude, it never occurred to me that the book signing for the launch would need to happen on the bonnet of my 13-year-old Skoda

Forty-three years ago, in 1977, I held my first book launch in a tiny arts centre that was underground in two senses. Firstly, it was located in a North Great George’s Street basement. Secondly, it produced such strange artworks in conservative times that one occasionally hear the boots of gardaí descending the steps to cast a caustic eye over preceding.

We were launching my debut pamphlet of poems, printed on a letterpress in a Finglas shed by a friendly chap who printed football pool coupons for local teams. The attendance included my family, friends from Finglas and artists from the centre, like Thom McGinty, later famous as the Diceman, who commented in his wryly jaundiced Glasgow accent: “Not Bolger and his fecking poetry again!”

Other people present belonged to an experimental writers’ workshop I was running there at the age of 18. Some regular attendees like Moya Cannon and Patrick McCabe were deeply gifted. Others seemed agitated, with me regarding their quirks as artistic temperament until I discovered that a psychiatrist in a nearby psychiatric hospital was encouraging his outpatients to attend as part of their treatment.

All were made welcome at the launch and all made free with my father’s whiskey, as strangers happily mingled and queued to have the pamphlet signed, as people do at sociable book launches, where old friends meet and new friendships are forged.

So much has changed in Ireland since then. Despite being only heated by two leaking Superser gas heaters, that basement was a rare outpost for the arts back then, hosting people as diverse as Christy Moore, Sean McBride, Eilean Ní Chuilleanain and Robert Ballagh. Today The James Joyce Cultural Centre, The Irish Writers Centre and Poetry Ireland all exist within a stone’s throw. Letterpress printers are now rare in Finglas back gardens, with technology changed utterly since the days when one of my favourite poets, Brian Lynch, entitled an early book, No Die Cast, because this was the longest title his publisher could conjure from the 11 letters of large type which he had purchased to print a previous book title, Dedications.

But one thing that didn’t change until this pandemic was the friendly ritual of the bustle of the book launch, with so much wine flowing that they resembled the Wedding Feast of Cana, especially as – like the guests at Cana – one always needed to stay for the speeches.

When leaving school in 1977 my writing CV primarily consisted of one poem and one short story published by David Marcus in the Irish Press. My poetry pamphlet was built around that poem. My plan for 1978 was to build a collection of short stories around the one published story. But, as John Lennon noted, “life is what happens to you when you are busy making other plans”. My plans to write a collection of stories got waylaid by the writing of 14 novels, 17 plays, a dozen radio plays, half a million words of journalism and the literary adventures and misadventures that fall upon any writer trying to raise a family with just the thin sliver of their imagination.

There were 10 poetry collections that gave my bank manager minor cause for apoplexy because not even signed copies can appease overdrafts. But somehow, until this current lockdown stopped all other work, I never found the mental space to re-examine decades of short stories written on the run. However, in the quietude of lockdown I finally revised my favourite stories for a debut collection, Secrets Never Told, four decades in the making.

While it was one thing to rewrite them for publication in solitude, it never occurred to me that the book signing for the launch would need to happen on the bonnet of my 13-year-old Skoda, until my publishers turned up in a mask with three boxes of books and a list of people who’d contacted them to request advance signed copies. Prof John McCourt noted on Twitter that I was adapting to the times and that “all books come with a three-year guarantee, and, unlike Brendan Kennelly who used to sell Toyotas, Dermot can actually drive”.

I don’t know if in the coming months another masked man will arrive with boxes and lists of curious readers wanting the signed copies available on the New Island website and in bookshops like Kennys and elsewhere. I just note that if you buy your bachelor uncle aftershave instead for Christmas, there is little chance of him leaving you the farm.

I also note that, when the world resettles into some new normality, I really hope the book launch makes a return. I’m probably spoiled in my affection for them because of the first launch I organised for Raven Arts Press in 1979.

Raven was a more underground operation than the arts centre because we only ever possessed one leaking Superser gas heater. When launching our first title in the beautiful old Protestant church in Finglas, we wondered was Finglas ready for poetry. We should have been asking were the Dublin literati ready for Finglas?

The locals who turned up listened appreciatively and went home quietly. Our problem was the arrival of denizens from Dublin’s literary pubs, eager to support our author, Sydney Bernard Smith. Finglas seemed like “Injun” country for them and many, including a famous portrait painter, tanked up with firewater for Dutch courage. We got to know this painter well, from carrying him from the church by his arms and legs. He apparently found it blasphemous that Anthony Cronin was reading and regularly interjected: “Balls! Balls! A communist reading in a Protestant church!”

The painter snuck back in each time we needed to eject another literary type for shouting, while locals watched in bafflement. If we thought that bringing art to the masses was difficult, we discovered how hard it was to keep the masses safe from the artists.

But the launch that remains most vividly with me was when Michael Hartnett, in poor health, attended the launch of a collection of poems. Initially he was in great form and I corked two unfinished bottles of wine for him to put in his inside coat pockets. But an hour later in the pub somebody said something that annoyed him. He swept past me, his coat swinging with the wine inside it. At the door he turned to brandish his stick and disappeared into the night, like a ghost from an 18th-century poem. It was the last time I ever saw that legendary poet alive.

But there again, there were people you only ever saw at book launches, back when they didn’t happen on the bonnet of a Skoda. Here’s hoping we get to raise a glass of bad wine in good company again.
Secrets Never Told, by Dermot Bolger is published by New Island Books (see newisland.ie for details)

Don McLean: ‘My ex-wife is the worst person I ever knew’’
3