Books: A round-up of what’s new for kids

Authors’ imaginations run riot in this selection of children’s books 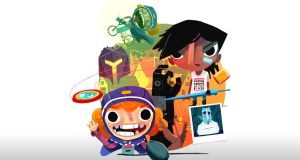 Demelza and Nessa in Gabrielle Kent’s ‘Knights and Bikes’.

If your children need inspiration for one last summer adventure, pass them a copy of Knights and Bikes (Knights Of, £6.99, 7+), which boasts as quirky a pair of questing protagonists as you are likely to meet in any contemporary children’s fiction. Set on the sleepy island of Penfurzy, it features two stunt-bike-riding, comic-book-reading, video-game-playing heroines, “spit sisters” Demelza and Nessa, who set out to solve the curse of the Penfurzy Knights, in the hopes of finding enough treasure to save Demelza’s family from ruin.

Demelza is a “mischief magnet”, living in a caravan on the cusp of the family’s failing holiday park, when “the coolest-looking burglar she has ever seen” invades her refuge. This is Nessa, whose Indian heritage will offer welcome ethnic diversity to the canon of contemporary middle-grade fiction. Armed with water balloons, feathers, a toilet plunger and a magical gauntlet, they battle animated suits of armour, giant metal mitts, and painted warriors that try to thwart them on their quest.

Written by Gabrielle Kent, who is a lecturer in video game design as well as an author, Knights and Bikes is rich with comedy and a nostalgia for 1980s popular culture that parents of a certain age will appreciate. The ending is undoubtedly cheesy, but even Demelza will admit that the best kinds of resolutions are, and Kent cements this exciting friendship with the promise of more adventures to come.

Max, the hero of Philip Reeves and Sarah McIntyre’s new collaboration, The Legend of Kevin (Oxford University Press, £8.99, 6+) also has an unexpected visitor: “a fat flying pony” called Kevin, who crashes into the balcony of his flat during the worst storm in the history of Bumbleford. Kevin isn’t the only new arrival: Max’s flat is the highest place in the whole town and they are inundated with refugees, including Gordon, who knows a lot about the Outermost West, “a very strange place” from whence the storm has blown in. “All sorts of creatures live out there that most people don’t even believe in anymore,” Gordon tells Max. “Magical things like mermaids and monsters . . .”, and roly-poly ponies with wings and a fondness for custard creams. With food rations running low, Kevin is the perfect companion to take Max out to explore the flooded town and find provisions.

Reeves’s story is full of surreal creatures, including web-footed sea monkeys with synchronised swimming skills, who terrorise the town. McIntyre’s blue and black illustrations come into their own in the underwater scenes. The mermaid takeover of the hairdresser salon in particular is full of wicked detail that will be appreciated all over again in the final pages. Newly confident readers will take to The Legend of Kevin like Kevin does to his new life in Bumbleford. This is a story with a very happy ending: Max manages to convince his parents to let him have a pet after all.

One of the funniest images in The Legend of Kevin is of the headmaster perched atop the school roof in full suit and tie, a snorkel and slippers: “Of course he wasn’t in his swimming trunks – that would be far too undignified.” It is an image worth saving to allay the worries of children who are anxious about returning to school.

For those with young children starting their journey in Montessori or primary school, meanwhile, Debi Gliori’s new book Little Owl’s First Day (Bloomsbury, £6.99, 2+) is a gentle introduction to schooling structures. Little Owl does not want to go to school and is determined not to enjoy himself. He doesn’t want to build a sandcastle or learn to fly, but he has to admit that it does look like fun. Slowly, Little Owl loses his nerves and by the end of the day he is snuggling up to his kind teacher, Mrs Oopik. Alison Brown’s expressive illustrations peak when we get inside the school room, which is nestled, of course, in the trunk of a tree.

Máire Zepf’s Don’t Go to School! (Futa Fata, 2+, £6.99), with illustrations by Tarsila Kruse, offers a different take on similar terrain. Benno the bear is delighted to be starting school, but his mother isn’t so keen, and the role reversal offers a brilliant way of dispelling anxieties through laughter. This is a rare English language translation of an Irish language picture book, which is testament to the effectiveness of its comic approach.

Bill, the hero of Pippa Goodheart’s The Great Sea Dragon Discovery (Catnip, £6.99, 9+), is a most reluctant school-goer. He would prefer to be out with his father, who cultivates dahlias for a local landowner, than learning about the Bible in a stuffy classroom. It is not that Bill doesn’t love learning. He does, and he has a scientific mind. He even discovers a way of turning flowers blue that must certainly help his father keep his job, if it doesn’t make him lose it, that is.

Set in 1860 against the backdrop of Darwinian discovery, Goodheart brings early science to life with a dramatic story that blends real-world concerns (family relationships, economic hardship, loyalty and friendship) with historical detail. Goodheart’s meticulous research never intrudes on her ability to tell a good story, however, and she laces scientific fact with a thread of fantasy that will encourage readers to apply their own observational skills and logic to Bill’s discoveries. Most importantly, young readers will never suspect that there is an ulterior, educational motive behind Goodheart’s compelling tale.