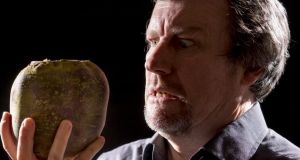 The nearest thing to a linking plot in Karl MacDermott’s latest collection of comic short stories is his ever-more desperate search for a reader, any reader, with whom to share them.

Not even his fictional literary agent, a professional enthusiast for the written word, can bring himself to make the effort. As the latter confesses eventually, “the auld internet” has changed everything: “There are no readers anymore. Only scavengers. Content scavengers. People who spend their whole day in front of a computer skimming or scanning material.”

This may be uncomfortably close to the truth for most writers these days, not just MacDermott. But like a Beckett character, he is compelled to carry on anyway. Godot the appreciative reader continues to elude him. In the meantime, devoid of a workable alternative, he keeps writing.

Whatever about him, the linking narrative at least has a clear purpose. It serves to string together an otherwise anarchic series of reflections on the human condition, or at least the particular strain of the condition that infects people on this island (where the author’s native Galway is his main laboratory).

Occasionally, the resultant epiphanies border on wisdom. A story called Mother’s Day, for example, juxtaposes the gradually reversing relationship between a mother and child as age propels it towards the usual sad conclusion. The effect there is definitely more tragic than comic.

The collection justifies Patrick Kavanagh’s dictum that the parochial trumps the provincial: that you don’t need to look beyond your own village for universal truths

But mostly, MacDermott’s focus is on the funny. Following a route signposted “The Meaning of Life”, he would always be tempted by a side-road pointing to “a good laugh”. And having sharpened his wits through many years at the front line of stand-up, he knows better than most where to find such diversions.

There are occasional dead-ends, it’s true. Or if not dead, then there are endings that are at least a bit lame, after the punch-line comes too early or not at all. The best stories, by contrast, are both funny and perfectly constructed.

These include A Series of Dim, in which a repressed character discovers the liberating effects of writing graffiti in toilet cubicles but is caught in the act, and Sisters are Doing it for Themselves, about a man in a love triangle with two mutually homicidal female siblings. Both yarns are paced to perfection: albeit the pace of Dubliners on speed.

The collection justifies Patrick Kavanagh’s dictum that the parochial trumps the provincial: that you don’t need to look beyond your own village for universal truths. Here, Galway substitutes for Inniskeen or Baggotonia, but a London publisher appears to have understood all the jokes.

Mind you, a minor irritation of the text is the recurrence in quoted speech of the hitherto unknown word “Arey”. This invariably comes at the start of sentences, where most Irish people would say “arrah”, or “arú”, and it seems to have they same intended effect. Either they spell it differently on the banks of the Corrib or, as seems more likely, the Hiberno-English was lost in translation between there and the Thames.

No doubt we commit reciprocal crimes to British dialect words all the time. Speaking of which, one of my favourite bits of the book is an entry from the (short) poetry section, entitled Don’t Try This At Home. A plot spoiler alert might be in order except that the verse is only three lines long. So here it is in full: “There was a man from Lancashire/Who injected his mouth with Ecstasy/E by gum.”

The quest for readers aside, literary humorists spend their lives searching for that elusive material called “comedy gold”. It’s a good metaphor, because there’s a lot of mining involved in the process. The big nuggets are not lying around in shallow river beds, usually, or indeed anywhere. Deposits are more often lower-grade and deeper down. Finding them can be a dirty, time-consuming business, very hard on one’s personal environment.

A past master of the genre, Mark Twain, knew this well. He was briefly – if unsuccessfully – an actual gold miner too, and brought his expertise into writing, where he once likened another humorist’s talent for word-finding to the gold-washing technique of “quicksilver raiding down a riffle”.

With his wild imagination, and a quicksilver instinct about what’s funny and what’s not, Karl MacDermott has raided down quite a few riffles for this collection. The results should be profitable. If laughs are hard currency, the book has more than enough to buy plenty of readers.