His 1961 novel, A House for Mr Biswas, is regarded by many critics as one of his most seminal works 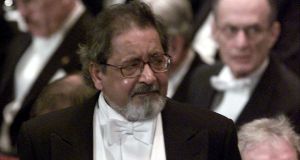 Writer VS Naipaul waits to receive his Nobel prize for literature in 2001. Photograph: REUTERS/Chris Helgren

British author and Nobel Prize winner Sir VS Naipaul has died at the age of 85, his family said.

His wife, Lady Nadira Naipaul, said he had died peacefully at his home in London.

In a statement on Saturday night, she added: “He was a giant in all that he achieved and he died peacefully surrounded by those he loved having lived a life which was full of wonderful creativity and endeavour.”

American travel writer and novelist Paul Theroux, who had a long-running literary feud with Mr Naipaul before the pair reconciled in 2015, said his friend had been in poor health and had recently visited him.

“He will go down as one of the greatest writers of our time,” Theroux said.

“He also never wrote falsely. He was a scourge of anyone who used a cliche or an un-thought out sentence. He was very scrupulous about his writing, very severe, too.”

The Trinidad-born author wrote more than thirty books, which often dealt with colonialism and attacked religion, politicians and pillars of the literary establishment.

He was awarded the Nobel Prize for Literature in 2001 for “having united perceptive narrative and incorruptible scrutiny in works that compel us to see the presence of suppressed histories”.

The Academy singled out his 1987 work The Enigma of Arrival, saying he created an “unrelenting image of the placid collapse of the old colonial ruling culture and the demise of European neighbourhoods”.

The writer, who was knighted in 1990, won numerous other major writing prizes throughout his life, including the Booker in 1971 and the David Cohen British literature prize in 1993.

His 1961 novel, A House for Mr Biswas, is regarded by many critics as one of his most seminal works.

The book was based on the life of his father Seepersad, who was a reporter for the Trinidad Guardian.

Mr Naipaul’s books on Islamic fundamentalism — the 1981 work Among the Believers and the 1998 book Beyond Belief — were written after he travelled through non-Arab “converted” Islamic countries.

His attacks on the religion prompted leading English professor Edward Said to say: “It is hard to believe any rational person would attack an entire culture on that scale.”

Mr Naipaul was also not scared of criticising the considered greats of English literature.

He once said Charles Dickens “died from self parody”, and he described the Ayatollah Khomeini’s 1989 fatwa on Salman Rushdie as “an extreme form of literary criticism”.

Mr Naipaul — whose full name was Vidiadhar Surajprasad Naipaul — was born in Chaguanas, Trinidad, and his family moved to the country’s capital, Port of Spain, when he was six.

It would later become the setting for his first novel, written in 1959 and titled Miguel Street.

In 1948 he won a government scholarship to read English at Oxford’s University College, where he suffered a nervous breakdown.

He married Patricia Hale, whom he met at Oxford in 1955.

She died in 1996 and he went on to marry Lady Nadira, who was some 20 years his junior, shortly afterwards. – PA

Golden decade: How Irish writing roared in the 1920s
4