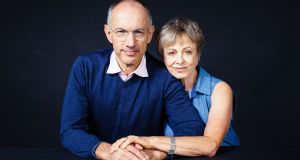 The Silicon Valley billionaire, philanthropist and author Michael Moritz and his wife Harriet Heyman’s charitable foundation has been announced as the new sponsor of the Booker prize, a month after the Man Group revealed it was ending its 18-year sponsorship of the prestigious award for literary fiction.

Mr Moritz and Ms Heyman’s foundation, Crankstart, has committed to an initial five-year exclusive funding term for the Booker, with an option to renew for a further five years. It will not give its name to the award, which will revert to its old name of the Booker prize from June 1st, when the Man Group’s sponsorship ends.

Financial terms of the deal were not disclosed, but the Booker Prize Foundation said there were no plans to change the £50,000 (€58,000) winner’s purse, or its recent expansion to include any English-language novel published in the UK. The prize for literature in translation will be known as the International Booker prize from June, and will continue to award £25,000 (€33,000) each to the winning author and their translator.

Mr Moritz, a venture capitalist whose net worth is estimated to be $3.4 billion, established Crankstart with his wife, the American writer Ms Heyman, in 2000 to support “the forgotten, the dispossessed, the unfortunate, the oppressed and causes where some help makes all the difference”. Recent donations include £75m to Oxford University in 2012, to support poorer students in taking up places to study and inspired, said Mr Moritz at the time, by the generosity of strangers in England who took in his parents as Jewish refugees from Nazi Germany.

“Neither of us can imagine a day where we don’t spend time reading a book. The Booker prizes are ways of spreading the word about the insights, discoveries, pleasures and joy that spring from great fiction,” Moritz said, who was born in Wales, studied at Oxford and now lives in San Francisco.

Previously, Mr Moritz worked as a journalist for Time magazine, writing a biography of Steve Jobs and Apple before turning to technology investment. He has been a partner at Sequoia Capital since 1986 and invested $25 million in what was then the tech startup Google in 1999. His recent work as an author includes co-authoring Leading with former Manchester United manager Alex Ferguson.

“These days I’m a global traveller but, just like the Booker, I was born in Britain and before coming to America was reared on English literature. Harriet and I feel fortunate to be able to support prizes that together celebrate the best fiction in the world,” he added.

Man Group, a hedge fund, had sponsored the award since 2002, but announced its withdrawal in late January. Accounts filed with the Charity Commission showed that Man Group had provided £1.5 million funding a year to the Booker Prize Foundation. Organisers said on Wednesday that they had been informed Man’s sponsorship would be coming to an end in the summer of 2018 – “before Sebastian Faulks described Man as the enemy” in press reports.

Asked whether it was appropriate for the British literary institution to be sponsored by a Silicon Valley billionaire, the Booker Prize Foundation said it was “confident that, in Crankstart, it has found a sympathetic and reputable philanthropic funder which shares BPF’s values and vision”.

Multiple interested parties inquired about sponsoring the prize once it emerged that Man was withdrawing. Helena Kennedy, chair of the Booker’s trustees, said: “We didn’t find it difficult to find people to have conversations with. It was about finding the right match, and people who were interested in it for the right kinds of reasons.”

She described Mr Moritz and Ms Heyman as “real book lovers”: “Many commercial sponsors want opportunities to use the thing for purposes like bringing their guests to the dinner. They are not interested in any of that. Their interest is sustaining good literature.”

Ms Kennedy said that renaming the prize the Crankshaft Booker was never suggested: “Michael and Harriet made it very clear that putting names all over things was not their thing. One of the things we love about it is we’re going back to being the Booker prize.”

The Booker had been much criticised by both authors and the publishing industry for the decision to open it up to anyone writing in English and published in the UK. Former winner Peter Carey called it “an exercise in global corporate branding”, while 30 publishers last year told organisers that the rule change allows “the dominance of Anglo-American writers at the expense of others”.

But the Booker Prize Foundation confirmed that “a sponsor or funder has no say over the rules”, and “there is no plan to reverse the rule”.

“We made that shift, it didn’t make everybody happy, but we’re staying with that,” Ms Kennedy said, stressing that the foundation was keen to “make sure small publishing houses get their crack at this as well”.

When it announced that its sponsorship of the prize was ending, chief executive Luke Ellis said that while it had been a privilege to sponsor the Booker, “following a careful review of our funding initiatives” it would be focusing its resources elsewhere.

The change comes during a period of upheaval for literary awards. In early February, the Folio prize announced a “substantially increased sponsorship pledge” from Rathbones Investment Management, which increased its prize cheque to £30,000 from £20,000.

The Baillie Gifford Prize for non-fiction, previously the Samuel Johnson prize, announced in February that it had a new seven-year sponsorship agreement from the investment partnership that would increase prize money from £30,000 to £50,000.

And the Women’s prize for fiction, which was sponsored by Orange until 2012, then by Baileys, and now by a group of brands and businesses from different sectors, also announced this month that it had been awarded charitable status, introducing a patron scheme to recruit individual donors. – Guardian