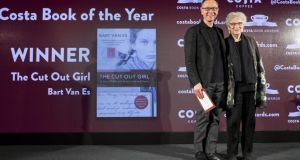 Bart van Es has a scholar’s objective eye for the bigger picture around the Holocaust. Photograph: Tristan Fewings/Getty

Book Title:
The Cut Out Girl

Onderduiken was one of the first Dutch words I learned when I went to live in the Netherlands. It means literally “to dive under”, to be submerged, and usually refers to the Jews and others who went into hiding during the German occupation. Sometime it was literal. I learned the word from my father-in-law, the only member of his large extended family to survive the war, spending its final months hiding under the floorboards of a friend’s house. Before that he had been hiding in plain sight, even marrying a lesbian Christian for protective colouring. Unfortunately she turned out to be a morphine addict, and blackmailed him into going out into Amsterdam streets at night to score drugs from German army doctors. The people who hid and protected Jews in Holland were often heroes, but they weren’t always saints, and this is one of the main themes of Bart van Es’s Costa Award-winning memoir, the story of a girl who dived under, becoming one of what are now known as the Hidden War Children.

The fate of the Dutch Jews is a conundrum, which van Es does not shy away from. Few countries had treated the Jews so fairly nor integrated them so profoundly and yet, of the prewar Jewish population of 140,000, more than three-quarters were murdered. How did this happen? Holland was regarded more or less as a part of Germany and it was run as such: all the institutions continued to function as normal, including the police. Conformity, order and organisation are very much central to Dutch culture, and the rounding-up and transportation of the Dutch Jews was of an exemplary efficiency. The Jew-hunting was generally not carried out by Einzatsgroepen or Gestapo but by ordinary Dutch policemen going about their daily duties. The majority of Dutch people neither resisted not collaborated, but kept their heads down and waited till things got better. People who then hid Jews were not just risking their own lives, but those of their family, friends and even neighbours. Those who did so were usually motivated by deeply held political and religious beliefs: Communists, Socialists, committed Catholics and devout Christians.

Van Es’s grandparents belong to that heroic group. They were working-class people, members of the Dutch Labour party. Van Es had heard vaguely about this, and knew that a Jewish child, Lien, had spent part of the war with them, but had broken off contact many years ago. He resolves to find out why, and the answers are not always pleasant.

His “auntie Lien”, Hesseline de Jong-Spiero, came from an assimilated Jewish family in The Hague. Her family were not religious, but as van Es says, “Hitler makes Lien Jewish.” When the Germans occupy Holland, her parents give her up to foster parents to protect her. She begins a new life with the van Es family. She will never see her parents again. They are arrested (by Dutch police, of course) in 1942 and murdered in Auschwitz soon after, something she only learns about after the war. The van Es family becomes hers but when the house is eventually raided, van Es’s grandfather is sent to a camp. Lien escapes and is passed along a network, sometimes staying just a night, till she eventually ends up in a very different family to the van Es.

Inevitably, there was culture clash, as children from assimilated, cosmopolitan middle-class backgrounds found themselves part of simple, Bible-reading, rural families. But sometimes it was worse: there was exploitation and even extreme sexual abuse, as was the case with Lien. Eventually, after the war, Lien finds her way back to the van Es family. But then a shocking event occurs which in the long term contributes to her complete rupture with the family, and she finds herself in freefall. This is a characteristic problem for the so-called Hidden War Child. Lien has lost two families, the first family murdered by the Germans, and then she is made to feel that the second family, who saved her life, is not her real family any more. Van Es’s book is not so much a Holocaust memoir as a rigorous investigation of how historical traumas work themselves out in a family down through the generations, always lurking just below the surface, and expressing themselves in unexpected ways. A simple misunderstanding over a birthday party can lead to the complete disintegration of family relations.

It’s a moving story of personal and family history, but van Es has a scholar’s objective eye for the bigger picture, noting on a visit to Holland that the Dutch Muslim community “in terms of the hatred directed towards them, is probably closer to the Jews of the previous century than any other”. At one stage he despairs of his project, wondering aloud to Lien if the world needs another book about the war. But Lien, now in her 80s, tells him that repetition is no bad thing: “There are also so many songs about love.” And the story of the fate of the Jews in the war is a story that needs to be told and retold, especially today.