This experimental novel narrated by a dog is clever, mature, entertaining and delightful 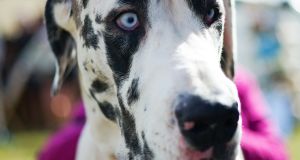 Apollo, a Great Dane, is the friend of the title. Photograph: Ian Forsyth/Getty Images

I had never heard of Sigrid Nunez before getting this book, but I wish I had. She is a 68-year-old writer who has published several novels and won a number of prizes. But until The Friend became a surprise success and winner of the National Book Award in 2018, she was not one of the famous American writers – that handful of stars we all read, not just because they’re very good but because they’re very famousand very well-marketed.

So what is the magic in this particular novel that won attention, quite late in the career of its author? Probably nothing much that isn’t in her other novels – apart, possibly, from this: a dog. According to one interview I read, an editor anticipated that the presence of a dog as a significant character in the novel would make it attractive to a lot of dog owners.

Apollo, a Great Dane, is the friend of the title, but the friend is also the dog’s former owner, a lifelong close friend of the narrator. He takes his own life and his dog is left without a home. Reluctantly the narrator takes Apollo, becomes attached to him and manages to persuade her landlord to allow her to keep him in her small apartment. That is more or less the entire plot of this novel.

While the dog is very interesting (he likes books), the novel is mainly about writers and writing. The unnamed first-person narrator is a writer and teacher of creative writing. This dual profession is shared by all her friends, including the one she is mourning – a charming, unashamedly old-fashioned sexist professor, a blatant womaniser who has married three times (mostly his students) and had countless affairs (mostly with students). The narrator ponders on the change in the ethos of universities, from a time when the classroom was “an erotic space” to the Me Too era, when a student who is writing a fantasy novel about “epic clashes between imaginary kingdoms” is afraid to include women or sex in it.

“Alone in my office he tells me that, in fact, there are women in his novel. And there is sex, he says. Loads of it. Most of it is violent … rape ... gang rape ... incest.

I delete all that for the workshop, he says … I could get kicked out of school. I’m not taking any chances.”

The new puritanism is only one of many topics the narrator considers. There are many others: the relationship of humans and animals, what writers are like, the state of fiction, what constitutes good writing:

“Her writing was good for three main reasons: a lack of sentimentality, a lack of self-pity, and a sense of humour. (If the last sounds unlikely, try to think of a good book that, no matter how dark the subject, does not include something comic.”

In its form the novel blurs boundaries between fiction and memoir, essay and story. Its voice is the intimate tone of the memoir, related by someone possessed of a well-stocked, thoughtful, indeed brilliant mind. An abundance of writers are quoted. But the key ingredients of a novel are in place, in the form of a straightforward storyline and strong characters: the dead friend, his wives (Wife One, Wife Two – nobody has a name in the book apart from the dog). Many novels explore the nature of writing, but this one does it superlatively.

The novel as a genre constantly renews itself. Sometimes the “innovation” is in fact a resurrection of the modernism of the early 20th century, sometimes received as if Joyce, Beckett, Woolf, Flann O’Brien – all those brave young experimentalists – had never existed. But here is a novel that subtly represents a fresh way of doing things. Karl Ove Knausgård, mentioned, like so many others, in the pages of The Friend, writes memoir that has the qualities of novel. Sigrid Nunez has written a novel that has the qualities of a memoir. Both have in common a narrative voice that is charming, amusing and refreshingly unpretentious. Both have authors who seem – at least in the pages of their writing – to wear their talents and knowledge lightly as a feather. Nunez’s is not a “look at me, am I not clever? Watch while I turn a sentence upside down” novel. But it is very, very clever. Mature. Entertaining. Eminently readable and re-readable.

Éilís Ní Dhuibhne’s latest book is Twelve Thousand Days. A Memoir of Love and Loss (Blackstaff). She is a member of Aosdána, ambassador for the Irish Writers’ Centre and president of the Folklore of Ireland Society