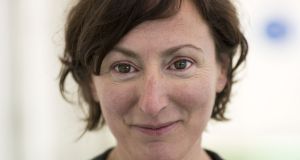 Who is Nina Stibbe? I had no idea when I agreed to review this book on the basis of the publisher’s description. As I read it, on a plane, with much amusement, I guessed her to be a columnist in the Róisín Ingle style, and a sort of Bridget Jones type. I can’t google on planes but, back on land, I discovered that Nina Stibbe used to be a nanny to some famous journalist who lived on Gloucester Avenue, next door to Alan Bennet and various other celebrated literati – the sort of place which doesn’t exist in Ireland. (No, not even in Ranelagh.) She has written two novels which have won awards, and a semi-autobiographical book which is dramatised by the BBC Love, Nina.

This work is a light-hearted and lightweight collection of articles and stories about Christmas. It ‘s hard to write a good “Christmas” story. The sub-genre demands sentimentality – you can’t really write anything with the sad or ambiguous ending endemic to the real short story if the thing is to be broadcast at 5pm on Christmas Eve before Santa leaves the North Pole. Dickens set the pattern. Nina Stibbe’s are duly sentimental, but her keen sense of the ridiculous saves the tales from being mawkish. A child visits a shop Santa who is her father:

“Henrik pretended not to know me, and asked simple questions that a real father should know, such as ‘What’s your name?’”

The chapters containing observations or advice relating to the various Christmas rituals are written in the same witty, intimate, beguiling tone:

“Still in the early hours of Christmas Day – the bird more or less thawed – the cooking preparation would begin. The methods have varied over the years, all with a view to combating dryness. Moistness being the main objective and coming only slightly behind non-toxicity and hugeness.”

Her advice piece on Christmas shopping, which includes a chronological account of the various strategies employed by her large extended family to make the Christmas present work easier, cheaper or to do away with it, is hilarious:

“I just am very good at Christmas shopping. This talent first showed itself when I was a small child and somehow knew that my mother would prefer a bottle of whiskey to any other thing you could get in a village . . . She drank it straight down and thanked me for not getting her the usual glass animal or fruit soap.’

Or: “The worst year was the year of the home-made food gifts . . . One person made everyone a single, albeit deep-filled, mince pie.”

It’s hard to quibble with such cheery stuff, although always tempting when the writer is someone from far away whom you won’t bump into next week at a launch. Reading this book reminded me of being a child, when my literary world was entirely set in England. I lived on a small road in Ranelagh, full of big families or bedsitters, but in my imagination I was in the Home Counties, in a big suburban house with a tennis court, a cook and a maid – or in a mansion in Cornwall. By comparison, actual life was not up to scratch.

In fact, our Irish Christmas has a huge amount in common with the English Christmas. Almost all the traditions underpinning this book are totally familiar to us, which would not be the case if it were a Christmas book written in Denmark, or Germany, or Bulgaria, or any of the countries the Brexiteers can’t stand. Nevertheless, the frame of reference and tone feel very English, just as in the Just William books and Enid Blyton stories of my youth. Waitrose, the Iceland in Truro, the Archers? I guess I am asking, why should we bother reading something which is so ephemeral and light, and so local? Would Jill Archer read a Nearly Perfect Christmas set in Dublin, full of references to the long queues in Dunnes Stores, and memories of the Clery’s Santy?

Bah humbug! Still, it’s a highly amusing little bagatelle of a thing, ideal for a Christmas stocking, especially if your family is doing books this year. Better than a single mince pie – although possibly not as safe a bet as whiskey. It will definitely get you, or your granny, through the day as far as Urbi et Orbi – or the Queen’s speech, if that’s your poison.