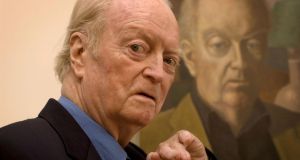 Benedict Kiely at the presentation of a new portrait of himself by Stephen McKenna. Photograph: Cyril Byrne

A clerical student with TB willingly strays into the arms and charms of one of his nurses; an embittered inn-keeper is gladly impregnated by her itinerant jailbird husband whom she detests; a begoggled cyclist besotted by notions of breaking the local version of the land-speed record earns lasting fame for riding of a different kind atop the tower of a ruined abbey with the whole world watching.

Welcome to Cosmona, a “picture-postcard” Eden for the fallen, where the sun shines all the time and the loudest sound is the river’s murmur, and which is home to a rare assortment of the broken-hearted and the addlepated. And yet, though their various afflictions and affections are rubbed raw during the “day of wonders” depicted in the novel’s action, up they rise the morning after, not necessarily wiser but not necessarily sadder, either. Indeed, if anything, the wonder is that just about all concerned have received an uplift, an earthy, natural, pagan resurrection through good, bad and indifferent sex.

To say how these various buck-ups and what their range of significance is would take all day, in large part because Benedict Kiely’s late style is in full flow here. Genial, unbuttoned, meandering, sentimental but unillusioned, satirical but affirmative, the language danders ingratiatingly along, additionally leavened by schoolboy jokes, old songs and obscure learning. A style of this kind, indulgent and unpredictable, is as liberty-taking as the sexual free-for-all it conveys.

William Blake declared, “Damn braces. Bless relaxes”; Dogs Enjoy the Morning says “Hear, hear”. This openness is also evident in the novel’s lack of a conventional story. Instead, a number of unconnected occasions are given their heads – like so many dogs at daybreak – to intersect, overlap, rhyme, clash, reflect and refract one another’s highs and lows. And to offset the preoccupation with copulation, a few stories of the stories focus on birth and death.

The seemingly spontaneous affinities between the different episodes can often be striking: priestly young Peter’s experience of restoration in the sanatorium has an unsettling counterpart in Stephen, son of Mortell the local miller, lying unmanned on his deathbed from treatment received as a Japanese prisoner of war; Cathy Hanafin, the betrayed inn-keeper, has her opposite number in Grace Roe, virgin and spinster, prudish sister of the loquacious local sage; Cosmona’s legendary horse-thief and abductor, Dark Domhnall, is an avatar of the nameless black seaman pursuing two loose local young ones; in the village square strongman Hoban vies for attention with the loudspeaker of a mobile X-ray unit.

From this mix, the cosmos of Cosmona emerges, a land of senses beyond respectability, ideology or sect, where no outlook is healthier than that of the local doctor, who “prefer[s] the curves to the corners of living”, physically and in all other respects. Even Mortell the melancholy miller, who resembles a stone in the midst of all, accepts that the stone complies to the mill-race’s onrush.

To put it another way: dogs enjoy the morning, when the world is fresh, the scent keen, the appetite sharp, all the more so, evidently, when the drive is predominantly male, exclusively heterosexual and is most valuable when leading to issue. Yes, Dogs Enjoy the Morning, first published in 1968, is still (mainly) good, dirty fun, a diverting read by an old hand performing at his ease. Now, though, it’s history, too, a reminder of another time when ideas of different, never mind contested, sexualities were hardly a glimmer in the public eye.