Welcome to LiarTown – where fake media is all too real 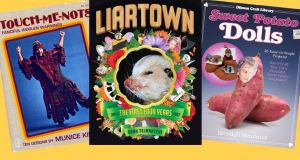 We’ve hardly started speaking before I remind Sean Tejaratchi of something he made called Oh, F**k These Lighthouses, a calendar which displayed a beautifully shot lighthouse each month, accompanied by incensed and scathing commentary like “goddamned beach nob” and “stupid tower of crap”.

It seemed too blisteringly funny an idea to be true, and of course it wasn’t. There was no calendar at all, just a painstakingly realised facsimile of a just-about-nearly-believable insanity.

It was my first introduction to the strange, maddening and hilarious world of LiarTown, his near-infinite catalogue of products that seem triumphantly absurd, and gnawingly, tantalisingly real.

“That one I really liked,” he laughs, before adding, almost apologetically, “I do still laugh at my own stuff sometimes, because it doesn’t come out of me like some sort of highly crafted thing. I don’t revisit it, so here I am years later, still laughing at it.”

If Tejaratchi is in the mood for a laugh, he’s in luck, since LiarTownUSA.tumblr.com contains a maddeningly dense treasure trove of his own work he might find useful for the purpose. Begun four years ago, it’s a collection of invented products, ads, books, magazines and Netflix specials that was peddling “Fake News”, in the purest sense of the term, before it took on an unfortunate second job dismantling civilisation as we know it.

LiarTown’s brand of Fake News has much humbler ambitions, like alerting you to the existence of Forbidden Fitness, a series of occult-themed workout guides written by Musclemancer Kraig Diabolucci. Or gigantic double page brochure spreads detailing hundreds of increasingly insane, celebrity-endorsed falconry accessories. Or the absurdist menus of AppleCabin Foods, where one can browse charming items like Green Todds, Appleberry Darlings and Vinegar Husbands.

The blog has just been collated into a truly staggering 270-page tome LiarTown: The First Four Years. Given the sheer scale of his catalogue, how does he even start?

“There’s two main routes,” says Tejaratchi. “One is having all the stuff, and then retrofitting an idea for it, like if, for example, I have loads of images of bodybuilders and desserts in front of me. Then, there’s the top-down route, where I have an idea and work from there. The occult fitness series was like that; a phrase very near “Forbidden Fitness” stuck in my head, and I eventually made something out of it.”

The depth and detail of Tejaratchi’s work has won him plaudits from cultural luminaries such as The Onion, comedian Patton Oswalt and science-fiction genius William Gibson – not bad for an LA-based designer with no established contacts within the industry.

“LiarTown just happens in the space between regular jobs and duties,” he says. “There’s no money in it. I just do it when I can. When stuff builds up in my head, I really want to see these things and churn them out, but it’s not an organised or money-making enterprise.”

Despite these humble intentions, LiarTown’s imagined universe of fake media has spread far and wide, beyond the clucking tongues of comedy’s intelligentsia, to a rabid fan base of online devotees, not counting those who receive Tejaratchi’s work unattributed, or who might even not be in on the joke.

“I certainly didn’t mean to trick any one into thinking this stuff was real,” he says, with regard to the inadvertent spread of his works as genuine cultural relics. “I go to great lengths to make it look real, but fooling people is not my goal, and it’s not much of an accomplishment I feel. There’s so much stuff, such a flow of garbage coming into our brains every day. We’re over-taxed, so getting something by someone isn’t some great achievement.”

This hasn’t deterred legions of “fans” peddling his wares without attribution, meaning that ostensibly ludicrous items such as, say, a guide to building your own bespoke Gene Hackman-themed sauna, or Ben Affleck’s oddly specific memoir, A Life In Raisins, frequently get passed off as face value, whether innocently, or in devious pursuit of second-hand viral success.

“I’ve got a pretty nuanced relationship with people stealing my stuff,” he says. “I mean, I take old advertisements and re-use them, so I don’t feel that I can complain too much. But I saw people doing this, and thought instead of trying to stop people from doing it, why not put it somewhere that its time-stamped so anyone who cared could find it on my site.”

Some of his works have found a life well beyond his own page, even spawning micro meme empires of their own. One such phenomenon was his short series of perfectly recreated screenshots from Law & Order: SVU, subtitled with dialogue in which Ice T describes alarming new crimes for the benefit of less hip colleagues. “They made him fight a newborn baby,” quotes Detective T in one such example. “Told him it was his own younger self time-travellin’ from the past, trying to steal his own birthday.”

Fast-forward a few years and the meme has spawned hundreds of imitations and even its own dedicated Twitter account. Despite the huge wedge of content he creates, Tejaratchi himself rarely revisits an idea more than once or twice, so is it slightly odd that entire forums now mine single ideas he had years earlier?

“I’m both extremely appreciative of it, but also wary,” he says. “Clearly, everyone else is discovering it’s easy and fun to do. Ultimately, I’m one of those people doing it, so I can’t say anything, but I also have a favourite saying: ‘There’s a difference between someone who robs a bank and someone who robs a bank every time they leave the house’.”

Tejaratchi still has day jobs that take up much of his time. As well as designing book covers for Seattle publisher Feral House, which is now distributing LiarTown: The First Four Years, he also helms Crap Hound, an inexplicable and astounding zine, each issue of which collects itself around nebulous combinations such as “Death, Telephones & Scissors” or “Clowns, Devils & Bait”.

Now in its ninth volume, Crap Hound fills the reader to bursting with genuine items and icons from centuries’ worth of visual materials, gathered together without context in a dizzying, multi-page critical mass.

“Crap Hound is like a cultural inventory, rather than a magazine,” he says. “It has an intro and one or two pages, and some acknowledgments in the back but everything else is just imagery taken from old advertising, illustrations and stuff like that. There’s nothing to read, there’s not much creative spin on the contents, apart from the layouts”.