Epic in scope, this book examines the many different and complex sources of racism 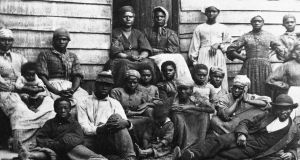 The book is hugely impressive in following the often complex threads of various racist attitudes and sources from pamphlets, pulpits and political discourse to the arts.

Book Title:
Stamped from the Beginning: The Definitive History of Racist Ideas in America

This book, epic in scope, is a detailed look at the history of racist and anti-racist ideas in America. It traces their antecedents in the thoughts of Aristotle and Christianity, citing Greek ideas of Greek superiority and the curse theory – Noah’s son Ham as the cursed Black person. Equally the antecedents of anti-racist thinking were also present. “‘The deity gave liberty to all men, and nature created no one a slave,’ wrote Alkidamas, Aristotle’s rival in Athens.”

Before the 1400s the slave trade was in East European Slavs (this is the origin of the word slaves). By the 1400s the Slavs had built better fortifications and Africa became the main area of operation for slave traders. This then allowed the curse theory to be fully activated as now the slaves were exclusively black.

Gomes Eanes de Zurara is credited with writing the first “recorded history of anti-Black racist ideas...” with The Chronicle of the Discovery and Conquest of Guinea, in 1453. It was a record of the Portuguese slavery trade in the 1440s under Prince Henry. As the author Dr Ibram X Kendi points out, his words were “a product of, not a producer of, Prince Henry’s racist policies...”

Time and again Kendi illustrates this as in the case of Thomas Jefferson who wrote: “No person living wishes more sincerely than I do...to see racial equality proven”. This from a man whose entire life and comfort relied on the use of slaves (estimated at 600 in his lifetime).

Anti-slavery concerns were often subordinate to other considerations as Abraham Lincoln reveals in this quote: “If I could save the Union without freeing any slaves I would...”.

Kendi surveys the racist thinking of major figures such as Hegel, Hume and Voltaire, saying that “...most of the leading Enlightenment intellectuals were producers of racist ideas and abolitionist thought”.

The book is hugely impressive in following the often complex threads of various racist attitudes and sources from pamphlets, pulpits and political discourse. And in culture, from Shakespeare to Spike Lee. There is a very interesting reading of Harriet Beecher Stowe’s 1852 book Uncle Tom’s Cabin. Although it was written to aid the anti-slavery lobby, Kendi identifies a multitude of racist ideas in it including the idea that black people had soul and white people had intellect. Black male activists of the time “united in their distaste of Uncle Tom for disseminating the stereotype of the weak black male”.

Kendi brilliantly lays out chronologically complex and conflicting ideas and actions. In 1851, at a women’s rights conference in Ohio, a sole black woman, Sojourner Truth, got up to speak even though some of the white women tried to prevent her. A series of male ministers had previously outlined the superiority of men over women. Truth said “Ain’t I a woman? I can outwork, out eat, outlast any man!” Thus she struck a blow against sexism and racism.

Kendi is critical of the idea of 'uplift suasion', the idea that blacks have to be model people to disprove racist ideas

The author skilfully locates racist and anti-racist ideas in a matrix of race, gender and class, through the Declaration of Independence (“all men are created equal”), the War of Independence, the 1960s civil rights and black power movements (noting at one point the “inverted racism” of the darker the colour of the skin the better) and on through US presidents Richard Nixon, Bush 1, Bill Clinton, Bush 2 and Barack Obama.

He sees the ultimate ending of racism as tied into gender and class equality: he points out that anti-racism ultimately only benefits the top one per cent and that at the height of slavery there was a majority of poor whites in the American south.

The book is divided into five parts each with a major figure from the history of the racist/anti-racist struggle as its centre: Cotton Mather, Thomas Jefferson, William Lloyd Garrison, WEB Du Bois and Angela Davis. Kendi calls them “tour guides” and they provide an excellent organisational framework for his material. Kendi also returns to certain key terms again and again in the book: monogenesis, polygenesis, assimilationism, abolitionism; there is also a climate theory that claimed that black people exposed to a moderate climate effectively could become white! In both racist and anti-racist positions Kendi identifies racist tendencies.

He is critical of the idea of “uplift suasion”, the idea that blacks have to be model people to disprove racist ideas: “Individual blacks are not race representatives”. Besides, Kendi maintains that racism persists despite any rational evidence – just look at the crazy Birther accusations levelled at Obama.The hugely impressive figure of Obama could be seen as the ultimate model person. However, Kendi accuses Obama of dealing in racist attitudes: he criticises Obama’s NAACP speech in 2009, saying that Obama’s call that black people needed to “free themselves from their ‘internalised sense of limitation’” was promoting a racist view that there is something wrong with black people. There are points in the book where what seems to be an attempt to name damage that black people have suffered at the hands of centuries of racism is unfairly named as racism by Kendi. Or perhaps that’s a racist observation on my part.

This is a powerful book, bracingly challenging and impressive in its scholarship and the brilliant organisation of its substantial material. Its message is one for all of us: “Black is beautiful and ugly, intelligent and unintelligent, law-abiding and law-breaking, industrious and lazy – and it is those imperfections that make black people human, make black people equal to all other imperfectly human groups.”

In a way it is a call to arms (“power will never self-sacrifice away from its self-interest”) but more than that, a call to human evolvement.