The British empire’s hidden history is one of resistance, not pride

It doesn’t require 20/20 hindsight to see the evils of empire. We should celebrate the many forgotten voices who spoke out at the time 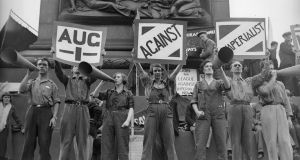 The League Against Imperialism canvasses for support at Trafalgar Square in London on August 1st, 1931. Photograph: Fox Photos/Getty Images

Some news never gets old. Twitter recently gave fresh life to a 2014 YouGov poll when imperialism’s leading televangelist, Niall Ferguson, reposted its findings that 59 per cent of respondents believed the British empire was something to be “proud” of, while 19 per cent felt “ashamed”. Ferguson determined that he personally had “won” some ongoing contest in which railways and the English language trumped slavery, massacres and land grabs.

In Brexit Britain, sustaining itself on dreams of a global renaissance in the embrace of its former colonies, a significant number of people likely believe the empire was a winning proposition. Between the saccharine justifications and convenient omissions of popular histories – largely written by privately educated white men – and the institutional failure to provide a reasonable schooling in the bare facts of imperial history, many Britons know little about the empire. “Pride” and ‘“shame” are both emotive and irrelevant.

Britons did in fact question fundamental aspects of imperial policy and practice and, at times, the project of empire itself

But those who are willing to undertake an honest assessment of the era today are also part of an important British tradition which, if not largely forgotten, has been pushed to the margins. Stephen Howe and Gregory Claeys are among the historians who have shown that, during many decades of Britannic rule, several Britons did in fact question fundamental aspects of imperial policy and practice and, at times, the project of empire itself.

Unlike modern advocates of empire who rarely ask why it was so strenuously resisted at the time, some Victorians, like this British judge in India, observed bluntly: “Our rule has been that of the robber and bandit and we are suffering from the natural result – insurrection.” Indeed, these sentiments were often a response to anti-colonial insurgency rather than about “national conscience”.

After the bloody suppression of the Morant Bay uprising in Jamaica in 1865, speakers at English solidarity meetings declared that “it behoved the people of England to demonstrate ... that they did not identify themselves with acts which had disgraced the British name”.

Protest was vital, noted the historian Edward Beesly, because what was done in the colonies today could be done in Britain tomorrow. “When the upper classes see how such injustice to labour, even in a distant colony, is resented by the working men of England, they will be careful how they trifle with similar interests at home.”

Today’s blithe balance sheet assessments suggest that if Britain massacred a few million people fewer than, say, Belgium, and left some infrastructure which ex-colonials were able to use, then the empire can be pronounced a good deal for all. Past British critics of empire posed sharper questions. They noted that the bulk of imperial profits lined the pockets of a wealthy few. Calling for immediate withdrawal from India in 1857, philosopher Richard Congreve wrote that it was wrong to cover up commercial motives with “moral or Christian ones”. He reminded British working people that those ruling India were the same people who displayed “hard indifference” and “haughty neglect” towards them at home.

The great Chartist Ernest Jones went further, urging working-class Britons to pick up a “glorious contagion” from India and exercise the same “holy right of insurrection” against an oppressive oligarchy.

If empire was about spreading benevolence, how it was that “Egyptians grew sulky at so much civilisation”?

Many critics asked why it was right to protect British sovereignty but punish colonial subjects who defended theirs. The travel writer Wilfrid Blunt did so while challenging familiar stereotypes of Muslim “fanatics” and “tyrants” used to legitimise the invasion of Egypt in 1882. Blunt might be describing today’s empire fanboys when he observed how Britons were called upon to “fall down as a nation and worship our own golden image in a splendid record of heroic deeds and noble impulses”. If empire was about spreading benevolence, asked Frederic Harrison, Blunt’s friend, how it was that “Egyptians grew sulky at so much civilisation”?

In the 20th century, Britain’s black and Asian residents also challenged the empire. The British-Indian MP Shapurji Saklatvala fiercely rejected the idea that Asians and Africans had no conception of democracy and had to be taught “gradually” to rule themselves. He also chastised the labour movement for not seeing that the exploitation of sweated labour in the colonies made their own conditions worse.

Civilisation must indeed be written down as a failure, if it could find no better means of spreading knowledge than is provided by the sword

The Jamaican-born poet Claude McKay reported from the London docks for the Workers’ Dreadnought newspaper, run by the anti-imperialist suffragette Sylvia Pankhurst. “Stirring up the passions of the workers against aliens,” he advised, was a “capitalist game” that “nicely fed and clothed labour officials” should not play. Pankhurst herself observed: “Civilisation must indeed be written down as a failure, if it could find no better means of spreading knowledge than is provided by the sword.”

Inspired by Asian and African leaders of the League Against Imperialism, which had an active British wing in the 1930s, the MP George Lansbury mocked his own past belief that “white men organise and control coloured people for the good of those controlled”. The vicar Conrad Noel, active in the League, was scathing about the canard that the British empire was unique in being “based not on force but on goodwill”. Such “moral apologies”, he said, were used by all empires.

In the 1950s, the writer Keith Waterhouse condemned “the monocle-flashing warriors of the Empah” who covered up “the thick catalogue of shameful things that have happened in Kenya in the name of the British empire.” MP Fenner Brockway also criticised unacceptable contrasts: “African land hunger, European land space, African starvation wages, European comfort.”

In the age of Brexit, it’s important that Britons know they have a tradition of truth-telling, honesty and international solidarity to be proud of and keep alive. It’s just not the one they are told about.
Priyamvada Gopal teaches in the Faculty of English at the University of Cambridge. - Guardian service