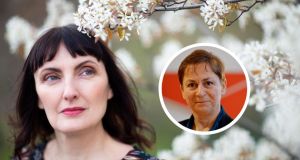 On Wednesday evening Anne Enright, the Booker-winning author of The Green Road, Making Babies and The Gathering, launched Constellations: Reflections from Life, the new collection of essays by the writer (and Irish Times contributor) Sinéad Gleeson. This is what Enright said at the event, at the Hodges Figgis bookshop in Dublin

Sinéad Gleeson grew up two streets away from the house where I grew up, so she is, for me, an object of local as well as national – and now international – curiosity. We know the same bus routes, the same churches – the small one at Kimmage Manor, the barn that is St Agnes’s. We know the library in Walkinstown, the hospitals in Crumlin and Tallaght. We now teach in the same corridor in Creative Writing at UCD.

We did not go to the same school. I headed north on the 15A. She went south because the suburbs were expanding south at such a pace in the 1970s. I played in a field where her school would be built, catching pondskaters and tadpoles in an unnamed ditch that runs into the Poddle, and I remember the loss of it to the bulldozers.

I did not like getting my reluctant, sad, smouldering feminism kicked. But all of you who know Sinéad Gleeson also know that she doesn’t care

So Sinéad represents something to me, personally – she is my younger generation – and asking what makes her the way she is is also a question about how Ireland changed in the years after I was born. What made her different and, in some ways, more able to speak? What made her, for example, a sharper feminist than me? Was it the way my generation got the shit kicked out of us by the referendums of the 1980s, or the way the Catholic Church got into our dreams. Were we more poor then?

Still, there are differences that made her growing up, in many tiny ways, more open. There was less religion, more gigs to go to, more than one shop in town that sold sandwiches, more flights out of Dublin Airport. There was, in time, the internet.

I tallied all this after the last referendum, on repealing the Eighth Amendment to the Constitution in order to allow abortion, when I looked at the crowds waiting for the result at Dublin Castle thinking how wrong I had been to despair. I realised that, when Sinéad came along, some years ago, to give my reluctant, sad, smouldering feminism a kick, she knew something I had forgotten about: the possibility for significant change.

Trying/failing to catch up on last night’s tweets, but full of gratitude to everyone who attended (and travelled miles). Thank you @Hodges_Figgis @KishWidyaratna, Paul Baggaley, Peter Straus, @picadorbooks @CormacKinsella, Davy - and to Anne Enright whose speech made my jaw drop. pic.twitter.com/Xd1cvn7BOr

I did not like getting my reluctant, sad, smouldering feminism kicked. But all of you who know Sinéad also know that she doesn’t care.

It is always interesting to ask of a book if it would have been possible 10 years ago. Or a century ago. What is the difference between Constellations and The Anatomy of Melancholy, by Robert Burton, or Michel Foucault’s History of Sexuality, or The Story of a Soul, by St Thérèse of Lisieux?

Sinéad lets the body falter and survive, or fail and die. She pushes back, constantly, strenuously, against incursion into the body’s mute hegemony

When I wrote about the female body 18 years ago, that body contained the body of someone who is now taller than me, and Sinéad Gleeson does not need that excuse. She doesn’t ignore the reproductive, but she does not privilege it, either. She lets the body exist alone. She lets the body falter and survive, or fail and die. She does not joke about pain, as though pain might be something she might, one way or another, deserve. She pushes back, constantly, strenuously, against incursion – whether that incursion be emotional, sexual or intellectual – into the body’s mute hegemony.

I think neither of us wanted to spend a book bitching about the Dublin maternity hospitals on Holles Street or the Coombe, although Constellations also contains a necessary outrage, one that was eaten up for too many years in theological argument, about the way medicine treats the human body, especially the bodies of women.

Constellations is written from the inside. But it is not just a book about sensations, or emotions, those precursors, or heralds, of our sense of self. Indeed, Gleeson is wary of the ego (a trait she may have in common with Peig Sayers). Constellations is not about “me” or “how I felt”. It is, like its author, constantly curious. The book looks outwards, to the scientific, historical and philosophical contexts, to the works of artists like Frida Kahlo and and writers like Lucy Grealy, who are precise and expansive about physical experience. It also makes art, in the poems it contains, as a way of bridging impossibility, of leaping over the body’s silence.

The first time you saw Sinéad Gleeson – maybe she was talking on the telly – you might have been forgiven for thinking, There’s a lovely Irish girl. To which the answer is very slow and very clear. Writing from the inside is a way of deconstructing external ideas about the female body, of undoing the gaze, so if you want to know what a “girl” is, then you can read that here.

There is also, in the book, a sense of opening from pain and difficulty that is properly inspiring, because Gleeson is so careful with the lyrical. So, yes, it is also “lovely”. You were right. She is a lovely, Irish, girl. (Just don’t quote me, all right?)

For those who like Sinéad as a person, as so many of us do, Constellations will be a difficult read. She went through so much. She is an absolute survivor

During my father’s final illness I spent a lot of time back in my childhood home, and a lot of time on the road getting there, and I lost so many things I can’t tell you: coats, pens, phones, keys; I lost, for a long afternoon, an entire car. I also lost a copy of Maeve Brennan’s Springs of Affection, which I needed for a lecture I was to write, sitting on my childhood bed, in the middle of all the business of a terminal illness, and really who else could I call? “Em, yeah,” said Sinéad, “I’m going over that way anyway.”

She rocked up a couple of hours later, cape flapping, a champion of Irish women’s literature, walking up to the door with a copy of the Maeve Brennan in hand. She came in, refused the cup of tea, sat with my mother and had the chats – had, like, a proper chat – and left. Who else, ladies and gentlemen, could do all that so well?

This is one of the reasons we are all here, because it is apparent what style of a person this writer is. We may admire her scope as an editor and critic, her ability to connect, her unwavering advocacy for the female voice, but for those who like Sinéad as a person, as so many of us do, Constellations will be a difficult read. She went through so much. She is an absolute survivor.

But what a pleasure it is to see Sinéad Gleeson’s own realised voice unleashed on the wider, and surely unsuspecting, world. It is not the changes in a society that make a writer; it is what they do to change it. If you want to know what makes Sinéad Gleeson remarkable, you will not find it in Dublin 12. You will find it right here.

Constellations: Reflections from Life, by Sinéad Gleeson, is published by Picador