Poem of the week: The Shrew

A new work by Patrick Cotter 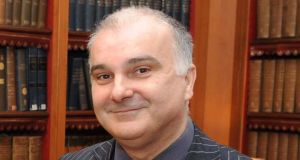 Poet Patrick Cotter is pictured at a ceremony in UCC in 2013. Photograph: Denis Minihane

As a small boy I woke to life’s delicacy in small parcels. I do not speak of plastic men in green and grey, in disarray: one August morning, sunlight strafed my bunk in a sea-side chalet, lighting-up casualties from last night’s skirmishes – curtain-falls to my daily Alameins or Waterloos. It had been no less a battle to stave off sleep, until it struck suddenly like a bullet’s hurtle.

Awake after sunrise I stirred and stroked my vellum- smooth face, pockmarks and bristles were years, flows of hormones away and as I turned in the twisted bedclothes, an Airfix commando dug into my shoulder as into a glum shallow foxhole, his arm upstretched, his hand clutching a Mills grenade – the plastic type, explodable only in the foothills

of a small boy’s imaginings. I turned again and my favourite Timpo knight, black and errant, slipped through the crack between the narrow bed and the box-wood wall, into an imaginary cold abyss where all hope bled. I slithered to the floor and squeezed beneath, breathless at the sight . . . the knight’s brave mount had landed on its feet and both horse and man were ready to charge a cowering shrew, pygmy shrew; so short a span

from tail to quivering nose: incredibly small next to the bulk of me. Loose sand grains all around were swept up in the little flurry of my awed exhalation. Soon the only moving thing was the furry shrew’s muzzle. She was so small, like a hairy beetle exuding personality. No sign of a wood louse or ant to snaffle: her being-there was a shock. I was able to see, as she scuttled away, each one of her whiskers mock.