Browser: A collection of essays for cerebral Clash fans 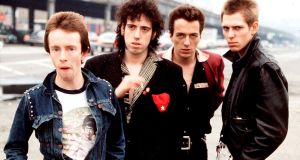 Working for the Clampdown: The Clash, The dawn of Neoliberalism and the Political Promise of Punk
Edited by Colin Coulter
Manchester University Press, £19.99

It is strange that this collection of essays on The Clash, stars of 1970s London punk, hasn’t made more noise; too weighty for punk fans, too radical for academics? If “music is the herald that foretells our future” (Jacques Atali, Noise) then the howling fury of The Clash’s signature anthems White Riot, London Calling and Straight to Hell, released as “les trentes gloriouses” stalled and Margaret Thatcher ushered in the “revolution of the rich”, are surely chorals for our own even more fractured times. With essays from feminist artist Caroline Coon (manager for two years, she witnessed the blood, sweat, tears and artistry it takes to get this good), our own Harry Browne, Martin James in Southampton, Alessandro Molitari in Australia and others, this collection is edited by Colin Coulter, a lecturer in Maynooth. So, did punk fail in its mission to change the world, or was the enemy stronger, more invisible, than even these heroic troubadours realised? Riveting stuff. – Rosita Sweetman

This is a moving, poignant, honest and beautifully written memoir of her parents’ declining years by the Canadian novelist Elizabeth Hay. She brings vividly to life her artist mother Jean, whose abiding characteristic was her extraordinary frugality, and her schoolteacher and principal father Gordon, a strict disciplinarian with a violent temper. Although there are many flashbacks, most of the book focuses on their last few years and does not flinch from the indignities of old age. What is striking is how Hay honestly faces their all-too-human shortcomings and failings as parents and her own as their daughter. By doing so, she emerges with a more nuanced and deeper understanding of both herself and them, finding a delightful humour in much of what they said and did, even in decline. – Brian Maye

What a clever idea for a book. Pick 20 instances of resistance in British history, get a creative writer to produce a story about each, and then have a scholar or activist give a non-fiction take on the same event. It works admirably. The events range from the Celtic leader Boudica’s uprising to the Grenfell Tower tragedy. (Curiously, there’s nothing from the Middle Ages – was it particularly quiescent?) It seems invidious to pick out individual pieces among many that are so good, but Lucy Caldwell’s insight into the Victorian Caroline Norton’s life is particularly striking. Norton’s violent husband deprived her of access to their children and her prolonged campaign of pamphlets, novels, newspaper articles and letters led to much better – though still not equal – rights for women. – Brian Maye

Artists struggle, wherever the starting point. Being a mid-20th century artist and a woman? We should capitalise the “s” after reading this.

Wade’s flowing style keeps the pages turning; the subject is catnip for lovers of literary biography. Belly laughs are here, too, with some figures parodic ideas of the Bloomsbury set: “Living in Chelsea on a diet of baked beans and cheese, he was working on an orchestral score and a study of the relationship between Nietzsche and Wagner.” – NJ McGarrigle

Wicked City: The Many Cultures of Marseille
By Nicholas Hewitt
C Hurst & Co, £20

Lurking south of France’s landlocked capital, Marseille parades as a port cargoed with promise, its eyes locked on the horizon. Psycho-geographically pointing away from Paris, it is weighed with lazy labels: crime-infested, North African, Mediterranean. Nicholas Hewitt, who died in 2019, brings anecdotal, kaleidoscopic and loving insight to the city that spawned the French national anthem. The 32-day voyage in 1826 of a ship from Alexandria to Marseille bearing a giraffe was faster than that giraffe’s journey to Paris. The proximity of Marseille to the “rest of the world” is duly underlined. Traced through historical snapshots and representations such as the inspirational Count of Monte Cristo, Hewitt’s is a deep tribute to a city passing the test of greatness: it lives in the imagination of people who have not been there. – John Fleming