Neil Gaiman, Ben Stiller and Monica Lewinsky, and the Twitter poem for refugees

Turning followers’ 1,000 tweets into What You Need to Be Warm was ‘ridiculously hard’ 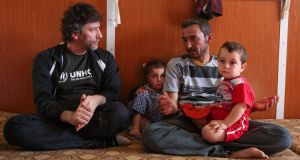 Coming up with his latest work was “ridiculously difficult”, Neil Gaiman admits. Last month the Good Omens and American Gods author, who is also an ambassador for UNHCR, the United Nations refugee agency, asked his 2.75 million Twitter followers to tell him what reminded them of warmth. After receiving almost 1,000 responses – with Ben Stiller and Monica Lewinsky among those to contribute – Gaiman found himself with a 25,000-word document, from which he has composed his newest written work: a free-form poem to launch a UNHCR winter emergency appeal for refugees across the Middle East.

What You Need to Be Warm touches on everything from “a baked potato of a winter’s night to wrap your hands around or burn your mouth” to “the tink tink tink of iron radiators waking in an old house”.

[Read the poem below]

“It was very intimidating. The original brief was, ‘Can you do a story with a plot?’ and what I’d figured was, we’d get 100 or so replies, I’d pick one that would somehow call to me, and write a short short story. What I wrote was much more of a reaction to sitting and reading 25,000 words of tweets, one after the other,” says Gaiman.

What is so beautiful about this is the ways people are describing cold in contrast to warmth. It’s ‘coming in from’, it’s what it’s a contrast to

He describes the writing process as “like trying to do the world’s most complicated crossword… It was ridiculously hard to write, and especially hard when you know one of the engines of – for want of a better word – public poetry is that it’s not a good idea,” he says. “Anytime you ever see something produced by a poet laureate about any royal event you think, Oh no, no… It’s that feeling that you’re doomed, but let’s go down as honestly and meaningfully as you can.”

Other suggestions ranged from “the sound of a cat’s purr” to “Grandma’s kitchen in foggy St Petersburg”; “pots of steaming tea so strong the spoon stands up” to “the smell of wet wool over classroom radiators”.

“What is so beautiful about this is the ways people are describing cold in contrast to warmth. It’s ‘coming in from’, it’s what it’s a contrast to,” says the author. “The biggest problem that the Syrian refugees have right now, as winter is starting to hit, is you don’t get that change of state. And that means two things: you don’t have a change of state from cold to warm, and you don’t have a state. That’s what it all coalesced around. It was much more of a free-form poem than I’d thought.”

Gaiman’s poem will be knitted into a three-metre Solidarity Scarf by Kniterate, a digital knitting machine company. It will also feature traditional Syrian floral designs created by women in Azraq refugee camp, in Jordan, which will be supported by the appeal.

“We’re in a place right now where public appeals mean something. We have more refugees and displaced people now than since the end of the second world war, and there are funding issues. The hardest part is that it doesn’t get better. They need blankets, warm clothing, thermal linings,” says Gaiman. “Trying to make art in order to get attention for something like this is a very good use of my time.”

What You Need to be Warm

A baked potato of a winter’s night to wrap your hands around or burn your mouth.
A blanket knitted by your mother’s cunning fingers. Or your grandmother’s.
A smile, a touch, trust, as you walk in from the snow
or return to it, the tips of your ears pricked pink and frozen.

The tink tink tink of iron radiators waking in an old house.
To surface from dreams in a bed, burrowed beneath blankets and comforters,
the change of state from cold to warm is all that matters, and you think
just one more minute snuggled here before you face the chill. Just one.

Places we slept as children: they warm us in the memory.
We travel to an inside from the outside. To the orange flames of the fireplace
or the wood burning in the stove. Breath-ice on the inside of windows,
to be scratched off with a fingernail, melted with a whole hand.

Frost on the ground that stays in the shadows, waiting for us.
Wear a scarf. Wear a coat. Wear a sweater. Wear socks. Wear thick gloves.
An infant as she sleeps between us. A tumble of dogs,
a kindle of cats and kittens. Come inside. You’re safe now.

A kettle boiling at the stove. Your family or friends are there. They smile.
Cocoa or chocolate, tea or coffee, soup or toddy, what you know you need.
A heat exchange, they give it to you, you take the mug
and start to thaw. While outside, for some of us, the journey began

as we walked away from our grandparents’ houses
away from the places we knew as children: changes of state and state and state,
to stumble across a stony desert, or to brave the deep waters,
while food and friends, home, a bed, even a blanket become just memories.

Sometimes it only takes a stranger, in a dark place,
to hold out a badly knitted scarf, to offer a kind word, to say
we have the right to be here, to make us warm in the coldest season.

You have the right to be here.

You can donate to UNHCR here