Iveragh for ever: another lesson from one of the finest students of the Skelligs

Michael Kirby had a poet’s heart, a painter’s eye and the unsentimentality of a scientist 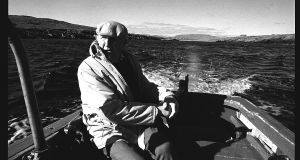 Michael Kirby: had the gift of expressing complex ideas simply; the poetry of his prose is evidenced in unadorned, unpretentious words.

There has been many a sea change since Michael Kirby’s final collection of writings on nature and life on the Iveragh Peninsula, Skelligs Sunset, was published 12 years ago. Released the year after he died, this work met with warm acclaim, with Brendan Kennelly calling him “a born storyteller, a seanchaidhe, and a contemplative, lucid, musical poet” in The Irish Times.

Since then, Skellig Michael has metamorphosed from a sanctuary for medieval monks and birdlife into a backdrop for a sci-fi cinema extravaganza. At the same time, our awakened awareness of the threat posed by ecological disasters has highlighted just how unique this heritage site and the clear ocean that surrounds it are. It is timely to listen again to a man who stands up for the dignity of a small, elemental place.

Kirby, a farmer-fisherman from Ballinskelligs, had the heart of a poet, the eye of a painter, the unsentimentality of a scientist and the reflective demeanour of a philosopher.

He lived his 98 years on the South Iveragh peninsula, aside from a spell in Depression-era North America. He had the gift of expressing complex ideas simply; the poetry of his prose is evidenced in unadorned, unpretentious words. Few share his ability to combine forensic observation of life forms – animal and human – with a humble acceptance of the mystical beauty of existence; those elect few are poets like Patrick Kavanagh, another small holder, or Robert Frost. Kirby’s passion and respect for his environment will resonate with the eco-conscious, and his insights re-channel our gaze to the pre-cinematic glory of the Skelligs.

Kirby wrote extensively during his life: his first collection with the Lilliput Press, Skelligside, was published in 1990 and was followed by Skelligs Calling in 2003 – which, with Skelligs Sunset, are all now out of print. In addition, he published extensively in Irish, including several volumes of poetry, Barra Taoide (1988), Ceol Madaí Rámha (1990) and Chuireas mo Líonta (1993), and a young adult novel, Iníon Keevac in 1996.

Deciding which of Kirby’s writings should be chosen for this anthology of his work in English, in order to best accommodate a diverse general readership and acknowledge academic interest, was not easy. A central editorial challenge was how to whittle down a body of work as extensive as Kirby’s and yet convey a sense of its breadth and significance. I took as my starting point Kirby’s rootedness and his celebration of place. That theme dominates his work, so the number of texts to be considered still remained extensive. I needed an organising principle that was flexible yet coherent. I also wanted his Irish-language poetry to be shared widely.

I resolved therefore to begin with writings on Skellig Michael, whose craggy sacred presence looms large throughout the writing, as it does on the book’s cover (photograph by Michael Herrmann) and in Kirby’s paintings. The opening scene of Skelligs Haul is established by Michael’s reflections on the Skellig islands. Next comes an autobiographical section that locates the writer in his own hallowed place. His story moves from the tug of war of the classroom of his youth through to philosophising in his declining days in his garden. From a focus on the man himself, the pieces chosen then turn to the tightly knit lives of family and local folk: the farmers, thatchers and tradespeople at work, and follow the young emigrant Kirby to the United States.

Predictably, the hazards and secret skills of fishermen preoccupied him, as did the fish and fowl that he acutely observed. Iveragh has a vigorous storytelling tradition which the penultimate section brings to life.

Finally, a small haul of Kirby’s verse, including nature poetry, satires and some translations, completes the selection. Kirby’s own loose translations from Irish to English and vice versa show his natural flair in both languages.

Over those last 12 years a whole new readership has missed out on the pleasure of seeing Iveragh through Kirby’s eyes. There is much scholarly work to be done to gauge Kirby’s lasting achievement. Now that a generous selection of his work is available in this single volume, and his archive is deposited in UCC, the nature of that challenge is clearer. The work of assessing Kirby’s contribution to local history, literature and folklore, of annotating his writing, and of evaluating how it complements and departs from the contribution of the renowned storyteller from neighbouring Cill Rialaigh, Seán Ó Conaill (1853-1931), is still in its early days.

Skelligs Haul will hold, I think, a strong appeal for Skelligphiles of all hues, whether they are visitors, locals or indeed scholars. Jane Urquhart summarises the lasting impression of Kirby’s work very well: “The way he lived his life affirmed something I have always known about creative expression: that it comes from the heart as well as the mind”. The book is also introduced by poet Paddy Bushe, and prefaced by myself as editor, with reproductions of Kirby’s landscape paintings commemorating his love of place.
Skelligs Haul is published by Lilliput Press