A hidden door, the oozing wall

Andrew Meehan on losing his way in Paris and finding inspiration for his acclaimed debut novel, One Star Awake 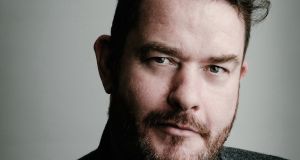 Andrew Meehan: all my disappointment resides in the northeast of Paris, somewhere between Bastille and Belleville

On my first trip to Paris, in 1990, I got lost in Châtelet métro. Forgive me if I remember spears raining from the ceiling. But I can vouch for the tunnels, one begetting another, all with added abattoir-reek. At one point, in the hope of escaping through a hidden door, I placed my palm on the wall only to find it oozing. One of us – me – was crying when we found our platform and boarded the train bound for Opéra, exiting the station to an almighty crack of lightning.

Go away, I thought. Go away with your pathetic fallacy.

Our hotel, once we persuaded them to let us into it, existed at the same remove from the fabled city as a pet shelter or an old folks’ home. The porter, who did not respond well to my embrace, was in a rush to get back to his transistor radio from which could be heard a song called Zobi la Mouche by Les Negresses Vertes. That it was my first time in a hotel with someone else – and there had been thunder and lightning, and we were in a district called Opéra, and the radio was playing one of my favourite songs – didn’t make it feel particularly romantic. It didn’t make it feel particularly safe. I might have had some sort of breakdown at the mention of a communal bathroom. Thanks to the cylindrical pillows and strange-smelling washing powder, I lay awake all night, during which time the wished-for rope from the ceiling – upon which I could ascend to the city of my imagination – never materialised.

And, to the neglect of other less opaque places, I just kept on finding myself in Paris – not only that, it became the location I chose, often at spree-ish expense, when I wanted to get broken up with. If, as he puts it in Helpless, all of Neil Young’s changes can be found in north Ontario, then all my disappointment resides in the northeast of Paris, somewhere between Bastille and Belleville. I’m trying to summon a good memory – an illuminating exhibition, a meal any better than the ones I had at home. Nor has time dulled the memory – I’m just not coming up with much. I’m almost touchy at how bad I was at being in Paris.

Not much happens in my life without a modicum of superstition. When it came to me to write about an Irish person who wasn’t in Ireland, the book could only be set in one place. And then it came, another crack of lightning: I would not set foot in Paris during the writing of a book that was set there. My first short story, Her Way of Saying No, is set in a concrete-y hotel in Connemara but was written in Venice; hence I was gratuitously certain that in order to negotiate the city onto the page I had to be somewhere else. That was one explanation, anyway. And, like many of us blessed with the omnipotence of ignorance, I assumed after a few months that I had enough material for a book. But being tired is not the same as being finished – although it does mean that you need a break, even if that involves doing the thing you said you wouldn’t do.

I felt nonsensically uncertain in my wander along Rue de Charonne in the 11th arrondissement, and I felt unsettled when I entered the whispery cafe where, after a conversation in French, Arabic and English, the waiter couldn’t supply the change of a tenner. This uneasy feeling would, I thought, have to be accommodated in the pages I had with me for editing. I skimmed them over breakfast, not in itself a bad idea. There was yesterday’s bread and scalded coffee, and I dipped one into the other. What came next was just as predictable. The manuscript – partial, worried over, dead – had begun to implicate me in ways, and so it was I that I returned it to my bag and pulled the zip. The city had ruled out the telling I had planned for it.

I went, then, in search of some water to splash on my face, along a passageway covered in varnished-over posters for gigs at the Bataclan; back when it was an inconsequential music venue. From the kitchen doors came a man in a blue binman’s jacket now worn by fashionable fellows the world over. His had greyed with age. He was, as restaurant people tend to do, having lunch at 10 in the morning; a fine-looking feed comprising of three or four steaming chicken legs. We did not speak, but he jerked a drumstick over his shoulder and gave the wall a heel, whereupon the bathroom door, which was by no means secret, hung open like the great maw of time. I’m not up to the job of saying much more about why I abandoned what I had written, except to say it’s funny how cities never humour you in the ways that you want them to, not least from afar.

The character appearing to me now had been abandoned in Paris with no recourse to backstory, with no one to call nor anything to call them on. Perhaps, at some point she had been stuck in a tunnel – come to think of it, why not in Châtelet station? The obvious does have a way of seeming uncanny. It occurred to me that she would either be obsessed with or dismissive of her own background. Amnesia is the human body at its most malicious and radical. But I dare say, when it’s happening to you, it isn’t one bit mysterious. No one volunteers to lose their memory, do they? And yet, in this regard, why are fear – of losing all that is dear to you – and fantasy – of the annihilation of your past – so often united? I have worried myself into stasis over the answer, which seems to be that one feels incoherent without the other.

The man in the binman’s jacket was nowhere to be seen when I left the cafe. Rue Saint Maur as I walked along it was stark and dismay-inducing, yet from the point of view of a character lost in the world, and to herself, as eerie and unintelligible as the Azores; useful, in other words, because Paris was now a void, newly vacant, and there for the filling. The man would later make his way into the pages of One Star Awake, chicken and all, as a Tunisian caretaker called Elias; a sheep in wolf’s clothing, of which there are many in the places we don’t know as well as we think we do.
One Star Awake is published by New Island