A gofer’s guide to ‘The Irish Times’ 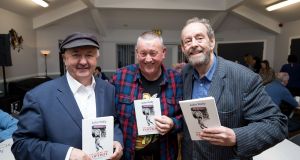 When a young Dubliner joined The Irish Times as a messenger in the mid-Seventies, the newspaper business was on the cusp of enormous change. Within a few years new technologies were replacing old, sweeping away time-honoured trades and practices in news gathering and printing.

I stayed with the paper for all 40 years of my working life and so was in a privileged position to observe and chronicle those seismic changes – which is largely done in Don’t Shoot The Copyboy.

But as the title suggests the book is not intended as a comprehensive history of the modern newspaper; it’s mainly to do with the eight years spent in that traditional role of gofer before graduating to the longer-term vocation of sports sub-editor.

It’s an affectionate and nostalgic romp as I look back through admittedly rose-tinted lenses, evoking the spirit of the Dublin city of my youth and paying fond tribute to the colourful and eccentric characters that were allowed to flourish in an environment that now seems impossibly primitive.

Inevitably there are anecdotes and personal portraits, hilarious as well as poignant. The esteemed music critic whose only fixed abode and bolt-hole was a spare room in the gods of the building. The decorator who was brought in to paint an office and stayed for 40 years. The young scrutineer in Tele Ads whose introduction to the department’s hydraulic system takes an unusual twist.

Of course legendary pressmen and colleagues are name-checked – Ned van Esbeck, Peter Byrne and Paddy Downey – and personal insights offered up, most of them complimentary.

Little did I realise back then that the office boy filling in for summer holidays would go on to become one of the country’s favourite fiction writers about the Irish working class. Roddy Doyle recalls with great fondness his two life-defining summers spent in the eponymous newspaper in the book’s moving foreword.

The Man Booker Prize winner spent many happy hours carrying out his various duties. “But in The Irish Times, I met friendly men – men who stopped to chat to me, a shy kid, who was there for the summer, doing the messages, sometimes making the tea. Dick Butler and Terry Thorpe – they didn’t know it but they taught me that being a man could be hilarious, that a man could be decent and kind.”

There are also some tales you suspect have grown taller since the first telling, but that is perhaps one journalistic tradition that lives on – don’t let the details or the timeline obscure the message you want to get across.

All in all, Don’t Shoot The Copyboy is a personal memoir, a snapshot of a watershed time in journalism and a city in ferment, and homage to work colleagues and friends fondly remembered. The book (€9.99) is available at Maynooth Bookshop, Co Kildare or can be ordered from jcrkelly208@eircom.net