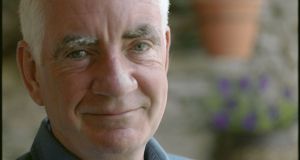 Bernard Loughlin: boldly expressive in every way – in opinion, in heart, in his love for his family

The news came to me from a colleague via text message over the weekend. Bernard Loughlin, first director of the Tyrone Guthrie Centre at Annaghmakerrig in Co Monaghan, had died in an accident at his home in Spain. Had I known him?

Like everyone in Ireland in the 1980s and 1990s who was a creative artist, I knew Bernard, his wife Mary and their two children, Maeve and Eoin, because we all, at some time or other, spent time at Annaghmakerrig while they were resident there.

Over the weekend, as I processed the awful news of his loss, it struck me that his death was also a marker of another era. I had received the news via my smartphone, but the first time I went to Annaghmakerrig, everything was analogue, including Bernard.

I went to Annaghmakerrig first when I was 19. I had won a poetry competition at Listowel Writers Week, and the prize was £100 and a week at Annaghmakerrig. That summer, I hitch-hiked to Monaghan from Clare, my manual typewriter and a pile of books in my rucksack.

My correspondence with Bernard had been via a phonecall through an operator: Newbliss 28 or some such now-unthinkable combination of two or three numbers, and a letter, which he had signed in blue ink with a marvellously elongated signature that stretched across the entire page. It was a hint at a character I came to know over the following years as boldly expressive in every way; in opinion, in heart, and in his love for his family.

That first evening, Bernard presided over the 7pm dinner that all residents remain required to attend, by the terms of Tyrone Guthrie’s will – a rule embraced by all with joyous enthusiasm. Then as now, the dinner table is a wholly democratic place: it doesn’t matter if you have had a play staged at Abbey or have yet to publish a book, as was my own situation at the time; everyone was equal and treated equally. Bernard made sure I was introduced to everyone.

One American writer at the table who had written an internationally wildly successful book had arrived that day by taxi from Dublin Airport: Bernard announced I had hitch-hiked from the other side of the country. She was on one side of me. The two of us got on famously, despite the vast contrast in our success and fortunes.

My companion on the other side was Anthony Cronin, at that time a cultural adviser to Taoiseach Charlie Haughey. He asked to see my poems; a thoroughly kind request that floored me with its generosity. But this was the kind of table Bernard encouraged, guided and kept, inclusive to all, regardless of age, background or achievements.

The distinctive Annaghmakerrig china was blue and white: Blue Denmark. Residents passed on to each other the fact that Bernard would go mad unless milk came to the table in a jug, and that each cup must have a saucer. The message to us was: we might be struggling artists, but we were not barbarians.

In turn, we loved and respected our surroundings and took care of the contents of the house, much of which had belonged to Tyrone Guthrie and his family, and which Bernard now trusted us to safeguard.

When not holding court at the table in the evenings, or in the office, Bernard could be found outside, trying to wrestle part of the enormous grounds into something resembling a garden. Each night, he did his rounds of the house, the family dog Molly by his side, pattering past our doors, making sure not too many lights were left on.

There was no television at Annaghmakerrig, and of course, back in the 1980s, there was no internet either. The one concession Bernard made to the outside world in all the years I went there was to put a radio in the kitchen the day after Desert Storm broke out in January 1991, and even that only stayed there a couple of days.

Back then, the only rooms were in the Big House; the dance and sculpture and artist’s studios and self-catering apartments there today were still long into the future. Most rooms had a fire, which Bernard encouraged us to light; the coal hole off the kitchen was kept full of logs. There was a boat, which we were free to row on the lake. We collected the oars from Bernard and had to return them to him again personally, so he would know we hadn’t drowned in the meantime. There were no lifejackets.

They were what I think of now as the glorious feral days of Annaghmakerrig: lighting fires in your room, rowing on the lake in the moonlight, unlocked doors, walking the few miles after dinner to the Black Kesh pub, and then unsteadily back.

Today, there are no open fires at Annaghmakerrig, the boat is gone, the Blue Denmark china is a discontinued line, you punch in codes to access both the estate and the house, the Black Kesh is derelict, and wine is sold at dinner. Times change, as change they must.

What Bernard did above all was to create a particular atmosphere at Annaghmakerrig. With Mary, he made the place a kind of home-from-home for artists; an inclusive, non-judgmental, thrilling place to be. Everyone who was ever resident there at that time will know exactly what I mean.

My absolute best memory of Bernard as director is coming down one morning to the breakfast table and finding a note from him to all residents. The car-park was located at the far right of the house, and someone had not been using it. “Please park in the car-park. Poets must be able to see the f***ing lake at all times,” it read.

We howled. It was vintage Bernard; a fabulous mash-up of irreverence, hilarity, and thoughtfulness.

Thank you, Bernard. None of us who knew you from Annaghmakerrig will ever forget you.