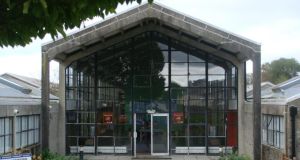 St Brendan’s Community School: from an era when Modernist structures popped up unexpectedly

We need more homes. We need more schools. Listening to Government apologists, it’s tempting to see these as intractable problems, or issues for that overwhelming (yet nebulous) entity known as “the market” to solve. But, did you know, back in the late 1960s and early 1970s, when Ireland was in a dark economic hole, unlit by memories of booms past or prosperity to come, universal free secondary education was introduced? Alongside this, a visionary building programme saw community schools, of occasionally shocking modernist design, springing up around the country.

If Ireland once had a bad reputation for undervaluing its Georgian heritage, we are at grave risk of doing the same thing today with some of the marvellous examples of modernism that took root from the foundation of the Irish State, and continued for a few decades, to flourish. One such, St Brendan’s Community School in Birr, Co Offaly, has just been awarded a grant from the Getty Foundation’s Keeping It Modern scheme, to research its restoration and preservation.

The grant alumni list is prestigious. Last year, Frank Lloyd Wright’s Price Tower Arts Centre in Oklahoma, USA; and Walter Gropuis’s Bauhaus building in Dessau, Germany, received awards. In 2016, Eileen Gray’s south of France Villa E-1027 headed the list. The Sydney Opera House has also been so celebrated. The Birr school is the first building in Ireland to receive the accolade, alongside this year’s awardees, including the Gateway Arch in St Louis, Missouri by Eero Saarinen; and the Salk Institute in La Jolla California by Louis Kahn.

St Brendan’s isn’t at first, second or even third glance beautiful. So what were the architects trying to do? And why might such a building still matter today?

St Brendan’s, designed by Peter and Mary Doyle, isn’t at first, second (or even third) glance beautiful. It’s a series of interconnecting glass-sided, for want of a better word, “sheds”, that could be small industrial or agricultural premises. The steel-framed structures have corrugated roofing, with breeze block and brick gable ends. So what were the architects trying to do? And why might such a building still matter today?

In an interview with Shane O’Toole (published in The Architecture of Peter and Mary Doyle, Eblana Editions, 1990), Peter quotes one of the teachers at the then-new school announcing: “My father has got a tractor shed like this.” Peter adds that it’s “a valid comment”. “I would say,” he continues, “she is aware of the sources for this building. It is not an unkind remark. Her associations are confused, culturally, because she thinks a school should not look like a tractor shed. And that is the problem of not having a universal language.”

The “universal language” he’s referring to is a hangover from earlier eras, when architecture, sculpture and art conformed to the same ideals, and shared symbols, beliefs and patterns. But the way he makes his argument reveals another problem that modernist architecture faced in Ireland: the architects may have travelled (Peter Doyle worked with Ludwig Mies van der Rohe, before returning to Ireland), but Irish people at that time were generally less mobile than they are today, both in physical, practical terms, as well as culturally: neither Ryanair nor the internet existed. And there’s a certain arrogance in Peter the architect’s language, the implication being that it’s the public’s fault for not being au fait with the new architectural thinking he espouses.

“Do you not think people have a right to expect that different building typologies should be immediately recognisable for what they are?” probes O’Toole. “No,” replies Peter, flatly. “The only way you can design a building is not to give it superficial signals to the public . . .”  Time proved the Doyles right, as St Brendan’s went on to win the RIAI Gold Medal in 1990, a highly sensible architectural award, in that it is only adjudicated after a building is a decade old; but to a public less well-versed in being blasé to the shock of the new, St Brendan’s was a hard one to swallow.

Superficial signals are one thing, but buildings do register intent. In art galleries, shockingly new work is tamed by being housed in historic edifices, while post-industrial gallery buildings contextualise art as a leisure industry itself. Looked at this way, old-style schools with impressive entrances, and darker classrooms with high windows, imply learning as part of a long tradition of thinking in particular, time-honoured ways; while brighter, more open or more innovative designs open up an underlying vein of possibility, of thinking differently.

Current principal Ming Loughnane was one of the first teachers to work at St Brendan’s. It had opened in 1980, though the Doyle’s design had been made for a Department of Education architectural competition in 1974. Loughnane had come to teach at the Convent of Mercy, housed in one of those narrow-windowed Gothic-style buildings for just 250 students. That and two other schools amalgamated to create St Brendan’s, and the student complement trebled. “First impression,” remembers Loughnane, “was that it was a vast site, long driveway, tall building . . . By comparison with the convent, the layout is totally different and conducive to good learning and subject specialisms.”

She describes a system of different subjects across different blocks, and a design that was created to be added to as needs changed and the school expanded. Between each block is a garden space with outdoor seating. “There’s cherry blossom, camellias. And we’ve had special projects – growing vegetables, rearing chickens in a coop built by the woodwork students.”

John McLaughlin, Gary Boyd and Aoibheann Ní Mhearáin, who collectively put St Brendan’s forward for the award, had researched the building when they were working at the Centre for Architecture Education in Cork. “We were teaching a year where students designed schools, and we took them to this building,” says McLaughlin. “It represented our shared concern and interest in architecture that’s not about a beautiful object. It’s about architecture that’s more driven by its social agenda than by being a beautiful thing. I’m not saying it’s not beautiful,” he adds. “But I’m thinking of the social role of architecture.”

McLaughlin and Boyd created the Irish Pavilion for the Venice Architecture Biennale in 2014. Their Making Ireland Modern project tracked how the new Irish State began to define itself through infrastructural and other building works. These included such iconic projects as Ardnacrusha and Busáras, as well as quieter schemes, like St Brendan’s, where utility, function and (very) limited budgets trumped any ideas of elegance. St Brendan’s was one of three schools designed by the Doyles and is, according to McLaughlin, “to be the finest, architecturally. Like many of these schools, the building needs to be renewed to bring it up to contemporary standards, particularly environmental standards”.

There are also social, practical and ethical issues at play. “These buildings had an openness about the way they were conceived that we thought was very valuable, and quite unusual,” says McLaughlin. “Architects have a very strong tendency to fix the design. But this tries to stage social encounters.”

“It’s a difficult building to engage with because it’s not a monument,” says Boyd. For him, the project is twofold. “It’s looking at an important building in the history of the Irish State and of Irish architecture, which was about democratising culture; but it’s also looking forward to the future, how these buildings contribute, and how they can continue to do so.”

For Boyd and McLaughlin, the environment is an important factor too. “We have this kind of portfolio of works in Ireland,” explains Boyd. “And the solution seems to be to tear them down and build other things. In terms of sustainability, we need to look at how to preserve and work with them. The most sustainable building is the one you have already.” Still, there are issues with insulation, and some remedial waterproofing is needed. “Our glass is about 40 years old,” says Loughnane. “So draughts are a problem. I wouldn’t change a thing about the layout, but we have three tall glass atriums, and if we could get a second glass wall in each, it would certainly deal with our energy issues.”

The building itself, she says, “has a very calming effect on student behaviour. Every hour one thousand people move, and it’s seamless. Then there are social areas, flooded with light, and internal courtyards for the kids to sit.”

From tractor shed to light-filled palace of learning, the Getty award shows that beauty is not a fixed concept, and that we can still learn a lot from a period of architecture that reflects a State determined, at one point, to invest in its children. It’s a way of thinking, and an architecture that we should be fighting much harder to preserve.

A full list of 2018 Getty award-winning buildings is at getty.eud/foundation. For more on modernist buildings in Ireland, see docomomo.ie

Oscars 2021 could be the best awards season ever
6