Margaret Thatcher on the new £50 note? Time for some Irish banknote nostalgia

The former British PM may be a woman of note, but putting her face on one is asking for trouble 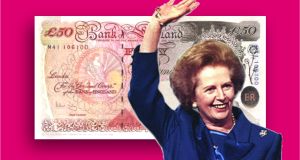 Margaret Thatcher is set to appear on the British £50 note. There are upsides. The hammering fingers behind those bitter, Twitter accounts that use “Brits out!” as the punchline to every second joke will generate enough energy to light the Border counties throughout the Christmas season. There are already British people who refuse to use the fiver because it’s got #warmongerchurchill on one face. If this goes on they’ll be reduced to trading turnips for goods and services.

I’m joking. I would not betray the version of me that stood outside East Finchley tube station in 1987 and urged commuters to vote out the area’s sitting MP (one MH Thatcher).

And she’s not getting on the note, anyway.

The possibility was teased last week when the Bank of England confirmed that the former prime minister was an eligible nominee to replace James Watt and Matthew Boulton on the upcoming redesign. But it’s all high-end trolling. The bank has decided that the next honouree must have “contributed to the field of science in the UK”.

Thatcher graduated in chemistry from Oxford and spent some time working in food research, but her greatest contribution to science – and even this is disputed – looks to have been some minor tweaks to the recipe for Lyon’s soft-serve ice cream. You may as well nominate Adolf Hitler for an honour recognising “contribution to watercolour painting”.

Some 114,000 other names are eligible. A high-street bookmaker with Irish connections has Stephen Hawking an absurdly short favourite at 1/3. Dorothy Hodgkin, winner of the Nobel Prize for chemistry, is offered at a more attractive 6/1. Thatcher is available with one turf accountant at a fools-easily-parted 25/1. I’d save your money. The bookies tend to be prohibitively cautious when offering odds on competitions that don’t involve balls or livestock.

One could be forgiven for feeling nostalgic. The economic arguments for the euro bubble and steam, but nobody has ever extolled the aesthetic qualities of the notes themselves. It is rumoured that Disney changed the name of their theme park from Euro Disney to Disneyland Paris because punters associated “Euro” with blandness and unsentimental commerce. The notes do little to counteract those prejudices. Nameless elbows of generic architecture frame blandly utilitarian typefaces. I had to pull a €10 from my pocket to remind myself what it looked like.

Compare that with the gorgeous Series A Irish banknotes that served from 1928 until 1977. Those were the ones with the painting of Lady Lavery on one face and images representing the nation’s great river gods on the other.

No successors were as attractive. Indeed, no others felt as much like proper money. But there was fun to be had each time the notes changed. The Series B fiver featured an uncannily prescient image of Gru from Despicable Me (if you don’t get this you’re either too young or too old). The Series C set straddled cultural differences by having a nun on the £1, dirty writer James Joyce on the £10 and top Prod Douglas Hyde on the £50. The editorials wrote themselves.

The weird Americans – who often don’t recognise their own cultural conservatism – have stubbornly stuck with notes that are all the same colour and same size. The elderly, the foreign and the visually impaired can still, it seems, go to hell. Most other nations enjoy periodic, vigorous debate about changes in the design of their folding stuff. Much of that conversation is focused on the important people whose images will soon be stacked in tills. The imperialist conquerors fade away in one part of the world. The writers and artists rise in another. The issuing bodies don’t always successfully embody the spirit of a nation, but such enterprises are always worth pursuing. Aren’t they?

Well, such discussions often cause more discord than harmony. Consider the grim adventures of the brave Caroline Criado-Perez. Five years ago the journalist launched a campaign to ensure that at least one woman appeared on a British banknote. She and her supporters eventually persuaded the Bank of England to place Jane Austen on the £10. One could hardly imagine a more reasonable request or a less controversial result. But Criado-Perez’s reward was one of the most savage hate campaigns in the unlovely history of the internet. At one stage she was receiving about 50 death threats an hour.

The miserable truth is that attempts to define national identity – whether through banknotes, flags or referendums on EU membership – rarely cause that nation to come together. Nationalism is the least emollient of instincts. The balustrades, viaducts and flying buttresses on the Euro notes may be boring, but they’re unlikely to trigger shouting in the street or abuse on social networks.

Anyway, Lady Thatcher is coming to the £50 note.