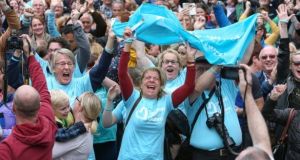 Celebrations in July 2016 when it was announced Galway was to be the 2020 European Capital of Culture. Photograph: Joe O’Shaughnessy

Arts producers working with the controversial Galway 2020 European Capital of Culture project have said they held “very constructive and positive” talks with Galway city and county chief executives on Friday.

The arts producers held a two-hour discussion with Galway city chief executive Brendan McGrath and Galway county chief executive Kevin Kelly at the end of a turbulent week, during which it was confirmed that two Galway 2020 board members had resigned and Druid Theatre had pulled its major production from the bid book.

Druid is still in discussions with Galway 2020 on a smaller project, as yet to be identified, but its withdrawal of its Middle Island production reflects serious concerns about budget cuts due to fundraising issues. Cuts of between 30 and 50 per cent on average – and up to 80 per cent in at least one case – have already been signalled for more than 30 projects in the bid book which have already required planning and investment. Galway 2020 declined to comment on the budget cuts.

In an agreed statement between the arts groups and the two local authority leaders, the meeting was described as “very constructive and positive”, and the appointment of Ms Philbin was welcomed.

“We impressed the urgency of key matters,” the statement said.

“We’re satisfied that the matters raised were understood and it was acknowledged that some were already under consideration,” it said, outlining a number of recommendations made which the two chief executives committed to putting before the Galway 2020 board.

The recommendations include renewing the partnership with the bid book producers; utilising the “existing expertise within the bid book to develop rapid, effective solutions”; addressing reduced artistic spend, funding and cashflow management; and addressing “communication concerns”.

A sixth recommendation is that existing vacancies at board level are filled with “skilled and responsible leadership”.

Two key board members, former EU commissioner Máire Geoghegan-Quinn and Galway International Arts Festival chief executive John Crumlish, stepped down within the past three weeks, but the chairwoman, Aideen McGinley, has described both resignations as “normal”.

Minister for Culture Josepha Madigan has expressed her support for the project, which is receiving the largest amount of money, €15 million, from her department.

Colson Whitehead: ‘I lacked imagination to conceive how terrible Trump would be’
8

Fontaines DC: ‘We’ve no licence to speak for Ireland’
10