Maire Geoghegan-Quinn resigns from Galway 2020 board 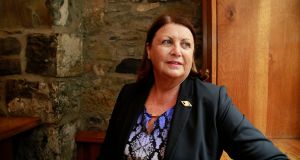 Galway’s European Capital of Culture 2020 project has lost another board member with the resignation of former EU Commissioner Maire Geoghegan-Quinn.

Galway 2020 said that Ms Geoghegan Quinn was stepping down as “she is not available to attend all board meetings as she spends a significant amount of time out of the country”.

“She feels Galway 2020 needs all board members to be available to attend all meetings,” the statement said.

Ms McGinley said she wished to thank her on behalf of the board for “her service to Galway 2020 and her ongoing commitment and support”.

The European capital of culture project, which lost its chief executive Hannah Kiely last month and its creative director, Chris Baldwin, in late May, confirmed this week that John Crumlish, Galway International Arts Festival chief executive, had resigned from the board.

That development came shortly after Druid Theatre confirmed to The Irish Times that it was withdrawing its major international production from the Galway 2020 programme.

Druid’s artistic director Garry Hynes told The Irish Times earlier this week that the award-winning theatre company had been forced to pull out due to the Galway 2020 project’s “loss of time, significant budget cuts and communication issues”.

“We have raised our concerns with the chair of Galway 2020 and are in ongoing discussions with them,” Ms Hynes said. These discussions involve a smaller, yet to be identified, project for the programme.

In a statement on Wednesday, Mr Crumlish said it was always his intention to remain on the board until negotiations began between the arts festival and Galway 2020 about the festival’s project for 2020 - as in a major commission of “mirrored pavilions” from artist John Gerrard. Mr Crumlish said these discussions were due to begin shortly, and he had stepped down and would wish the board and executive “every success”.

Speaking on RTE Radio’s News at One today, Ms McGinley also sought to play down the resignations.

“The one thing I want to do is nip rumour in the bud, because one of the things we have actually suffered from is a lot of people making news of things that are the norm, and board members etcetera moving.

The relationships we have with our cultural producers are vital,” she said.

She confirmed that the budget was €39 million, and that a €46 million figure quoted during the bid was “aspirational”.

She declined to comment on reports of budget cuts of between 30 to 40 per cent and up to 80 per cent for some projects, and said that discussions were continuing with cultural producers.

A group of 20 projects are meeting Galway city and county chief executives on Friday over their concerns about budgets, loss of creative vision with no artistic director and other issues.

Galway city’s mayor Niall McNelis (Lab) says he is confident the project has “turned a corner” with the appointment this week of a new Galway 2020 chief executive, Patricia Philbin, who led the original bid team.

The project was still “actively looking” for a creative director to replace Mr Baldwin, who resigned last May, he said.

Ms Philbin is one of two city council officials seconded to senior management roles in the project in recent weeks , with Mark O’Donnell recently appointed as chief operations officer.

Love/Hate is returning to RTÉ on Friday nights. Why did we love it so much?
4