Artists shouldn’t hold their breath for a universal basic income 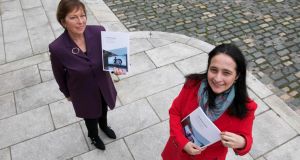 Claire Duignan, chairperson of the Arts and Culture Recovery Taskforce, and Minister for Culture and Arts Catherine Martin at the launch of the taskforce’s report last Tuesday. Photograph: Fennell Photography.

This week the taskforce set up to advise on post-Covid recovery for the arts published its recommendations, and they make an interesting read. First, the bad news: the taskforce, headed by former RTÉ executive Clare Duignan and comprising artists and representatives from different parts of the cultural world, along with State bodies, warns there’s “a real risk Ireland will emerge from Covid-19 to find its arts, culture and events sectors decimated, with some venues closed for good, many businesses folded, large numbers of skilled and talented performers and workers gone to other careers, and much of the experience and creativity of the sectors gone”. It could take years to repair the damage.

What to do? The group makes a number of concrete recommendations.

There’s a section on facilitating arts venues within the current Living With Covid strategy, recommending account should be taken of the value of culture to society and that regulators should also recognise there are many cultural venues where social distancing is already achievable, while sensible investment might be required in others. On a similar theme, the taskforce advocates for an investment in open-air spaces and in the public realm in recognition of the increased importance of those spaces – parks, urban squares etc –for live performance.

A number of recommendations aim to maintain economic viability for individuals and companies. Some of these have been on the agenda for a while, including a mooted reform of copyright law and a more arts-friendly approach to taxation. Others are more specific to the pandemic moment, such as a special business support scheme for SMEs in the live entertainment sector.

The most eye-catching relates to a new approach to income for artists and arts workers. The taskforce quotes a recent OECD report on Covid-19 and the cultural and creative sectors that “employment and income support measures are not always accessible or adapted to the new and non-standard forms of employment [...] Existing measures notwithstanding, workers in the cultural sector will need ongoing support if this sector is to avoid enormous long-term damage through a depletion of skills and talent caused by migration away from cultural work and towards more stable sources of income.”

The solution proposed by the taskforce is the introduction of a pilot universal basic income (UBI) for artists and arts workers. UBI is an idea that’s been floating around for decades on the margins of political discourse, and has been trialled on a small scale in some European countries in recent years. Briefly defined, it’s a universal payment from government, paid regardless of income or wealth to every person on an individual basis, without means test or work requirement. It’s tax-free, with all other personal income being taxed. When fully rolled out, it would replace almost all weekly social welfare payments, as well as all tax credits and tax reliefs. And, unlike traditional means-tested welfare systems, payment is not affected by changes in employment status, giving people the freedom to engage in productive activity and earn further income

Getting UBI into the taskforce’s recommendations is a big win for the National Campaign for the Arts (NCFA) which has been pushing the idea for some time now. It’s been helped by the fact that there’s a commitment to running a pilot UBI scheme in the current Programme for Government.

Make no mistake, this would be an unusually radical step for an Irish government to take

More broadly, the upending of traditional fiscal orthodoxy in the wake of the pandemic has stimulated debate about what the future role of the State should be in the economy. And various social trends since the 2008 economic crash, including widening economic inequality and increased automation, have prompted calls for these sorts of radical solutions.

Here, UBI has been promoted by left-leaning bodies such as Social Justice Ireland, but in the US it’s often supported by libertarians such as tech entrepreneur Elon Musk and Democratic presidential primary candidate Andrew Yang, who like the idea that it would simplify and reduce the state’s intervention in people’s lives.

Make no mistake, this would be an unusually radical step for an Irish government to take, even on the basis of the relatively modest costings suggested by the taskforce. It’s guaranteed that those costings will be rigorously interrogated by the Department of Finance (they look a bit back-of-the-envelope even to this untrained eye).

It’s easy to lampoon the idea of UBI, and the proposed scheme is bound to be attacked from some quarters. But is there any chance of it actually happening? Back in the heady days of social partnership, Bertie Ahern’s government published a Green Paper on the idea, with substantial input from the Conference of Major Religious Superiors (the forerunner of Social Justice Ireland). It has lain on a shelf for 18 years. Perhaps the taskforce shouldn’t hold its breath.