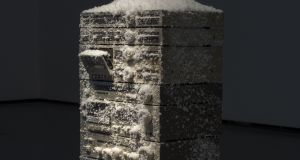 Hearing Heavenly Music is a sculptural installation (and the title of an exhibition) by Polish-born artist Maria Loboda.

The piece has an architectonic, monumental form: a steely, snow-dusted column stands like a memorial in winter. But hang on, isn’t that protrusion the open door of an audio cassette tape housing? And isn’t the whole column a stack of audio components?

Hearing Heavenly Music, Loboda’s first solo show in Ireland (she has featured previously in group shows at The Model and at IMMA), originated at Ujazdowski Castle Centre for Contemporary Art in Warsaw, Poland, and will run for two months at The Model (The Model, The Mall, Sligo) until February 2nd, 2020. themodel.ie

Typical in its unpredictability, perhaps. One never knows what material form a work by Loboda will take. As a project develops it demands particular processes and materials. At that point she works with “skilled technicians and craftspeople” to realise her ideas.

Born in Krakow, Loboda moved to Germany when she was nine. She studied art in Hamburg, and then attended the prestigious Städelschule in Frankfurt am Main for six years, with Mark Leckey as her professor. The Städelschule places the onus on the student to get on with their work, with periodic meetings with their chosen teacher. All the teachers are working artists. It doesn’t suit everyone but Loboda loved her time there. Nominally based in Berlin, she has been in enormous demand during the last 10 years or so, and she moves around a great deal, which she likes.

In an interview earlier this year with Karolina Majewska-Güde, Loboda said that her starting point is usually what she terms a “verbal sculpture”. That might be “a title, a poem, out-of-context terminology, a chemical compound description”.

The words are a kind of “spell” that provides a key to work, which might be a single piece, an installation or an exhibition. She does not work in a studio, but by being a flaneuse, wandering the streets, stores and markets of whichever city she is in, drawing together “bouquets of thoughts” condensed from her experiences and finds.   “It brings me joy to make a good riddle,” she commented in another interview.

The works can be thought of as concrete puns, puzzles or riddles, depending on but not obviously elucidating their connection to the “keys” that inspired them, and the enormous store of literary, historical and quasi-scientific arcana and curiosities that she collects. It’s interesting that she is enthusiastic about the work of Alfred Hitchcock, Sylvia Plath, Agatha Christie and Edgar Allen Poe.   Plath, Poe and the film American Gigolo are all points of reference in Hearing Heavenly Music. A Documenta project involved the covert progress, under cover of darkness, of 20 cypress trees in pots through parkland. They were moved according to a pattern outlined in a Roman treatise on military strategy, but it was hard not to think of the ominously advancing Birnam Wood in Macbeth.

The combination of the prosaic and decorative – plants in pots – with a more sinister undercurrent is typical. Another work draws a correspondence between chemical catalysts and fictional characters who act as catalysts in narratives. Hearing Heavenly Music might have a seasonal dimension, but it’s not A Christmas Carol.