What has art to do with climate change? 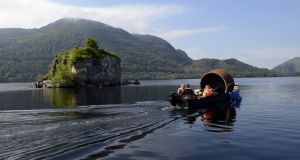 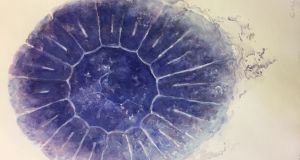 You might easily think that the names of the two template image shapes on smartphone cameras – portrait and landscape – were coined for the digital era, though they were already familiar to anyone who worked in publishing before the micro-chip changed everything.

And indeed, these twin concepts of portrait and landscape reflect two fundamental categories of visual art. You could even say they go right back to the moment our species developed art in the first place. Early cave art, in Europe at least, mostly featured animals, often arranged as if in a landscape. Cave artists also proclaimed individual human identity, through hand prints that we might consider the first portraits.

And as art developed, most cultures maintained this dual focus, on portraits of people, and portrayals of landscapes. And often of both at once, with varying relationships between the two.

In The Harvesters, Dutch painter Bruegel the Elder celebrates the human labour that transforms a diverse natural landscape into highly productive if monotonous wheat fields. Henry Raeburn’s Sir John and Lady Clerk, which hangs in the National Gallery on Merrion Square, exudes the pride of individual ownership of vast tracts of parkland, where nature has been tamed for safe recreation.

In our own times, artists have been trying for decades to engage in new ways with our heightening awareness of rapid and potentially catastrophic environmental change, generated by our own actions. And this unprecedented crisis requires us to think about the interaction between humans and the environment – between portrait and landscape, if you like – in radical new ways.

This growing engagement of artists with environmental issues has had powerful echoes in several strong exhibitions here in recent years.

For the last three months, curator Olivier Cornet has hosted 2°C at his gallery in Dublin, in an unusual partnership with the Environmental Protection Agency (EPA). Cornet’s initiative was praised by this newspaper’s art critic, Aidan Dunne, for “allowing artists to affiliate their work to a subject – in this case climate change – without distorting their customary practices”, and getting “thoughtful, nuanced responses” from them.

Earlier this month, Cornet hosted a panel discussion around the exhibition, with the rather daunting title “What on Earth has art got to do with climate change?”

The panel was made up of two exhibiting artists, Yanny Petters and Hugh Cummins, and myself, and chaired by the ecological architect Paul Leech.

The conversation tended to be dominated by a concern that the quality of art may suffer, if artists are corralled into expressing themselves about any particular issue. And yet it was very clear from the work on the walls, and what the artists said about them, that Aidan Dunne is right: in this case at least, each artist had found their own authentic way of expressing a concern that was not artificial or forced, but that had already entered their imaginations.

It is true, though, that some of the works are so nuanced as to be quite difficult for the layperson to “read”, unless they had the privilege of hearing the artists speak about them, or had the chance to read their catalogue statements. But then, that has long been the case with quite a lot of contemporary art.

You’d need to know quite a lot about jellyfish, too, to appreciate the full significance here of five exquisitely detailed paintings by Eoin Mac Lochlainn. But once you know they represent species that have only reached our coasts in numbers in recent years – and which happen to be quite toxic – then they not only fit the climate change theme, but provoke further questions, as all good art should.

In the rather problematic language coined by biology in the last century, these jellyfish are “alien” species, and possibly “invasive”. If they are invasive, they may not only be a threat to swimmers, but to the survival of native species that have no defences against them. But they are also, as is evident from the prints, very beautiful.

The problem lies not with these jellyfish species as such, but with the fact that human impacts have accelerated global change to a speed where multitudes of species are showing up in new environmental contexts across the globe, often with disastrous results.

A similar issue to Mac Lochlainn’s jellyfish is picked up in another but very different current art show, and by a very different artist, Gareth Kennedy. Like his fellow exhibitors in touring show In-Sites/Ón Ceapach, Lisa Fingleton and Monica de Bath, Kennedy’s work around environmental questions is based on long-term projects that actively include the communities where these questions arise.

They all produce artworks which can be displayed in galleries, in Kennedy’s case a fascinating short film and a beautifully made book with very well-informed texts. But their work is as much about the process of making it as it is about the end product.

The theme of Kennedy’s Post Colony is the social, cultural and ecological history of the place that is now Killarney National Park, going back to the Elizabethan period. And his main focus is a Rhododendron ponticum. This is a species which, like the new jellyfish, arrived here through human agency – and is also very beautiful. But has been destroying our native oak forests for decades, if not centuries.

Kennedy developed a project he hoped would raise awareness of the problem posed by the shrubs’ continuing infestation of parts of the park as well as – he is nothing if not ambitious – exploring the role of Killarney’s oakwoods in building the British empire.

His work included using cleared rhododendron as a resource for a local team of specially trained woodworkers. They made traditional one-legged stools, which allowed charcoal-burners to rest but not fall asleep. He also organised them to use 300-year-old burning techniques to make charcoal based from the same resource. And he filmed it all, an expedition into past practices that raises big questions about our future.

Lisa Fingleton, lives and works on a small farm in Co Kerry. She has shaped her efforts to live only on locally produced food into a series of beguiling artworks that attempt to suggest what a healthy and sustainable relationship between culture and nature might look like.

The third participant, Monica de Bath, has placed herself and her work at the very heart of one of our most enduring environmental controversies: how we should manage our bogs. For years, she has made her studios in disused Bord na Móna workers’ huts on the Bog of Allen and in Co Mayo, and is in continuous personal contact with people who are still cutting turf.

“I’m lucky to have the opportunity to mix with people who mine the land,” she says. “They have great respect for it, yet need to make a living from it.”

Her work weaves an intimate knowledge of the bog’s ecology and its people into myriad paintings and notebooks. Rather than taking up a particular position, she says, art “acts as a meditative space where traces of diverse views are pulled together; it can establish a position from which to look at things differently.”

In-sites/Ón Ceapach, a touring show from Dunamaise Arts Centre supported by the Arts Council, is running at Siamsa Tire, Tralee, until March 28th. Paddy Woodworth will chair a public discussion with the artists and others at Siamsa on Saturday March 24th. The show moves to the Courthouse Arts Centre, Tinahely, Co Wicklow, on April 8th.