Five of the best art exhibitions to see this week 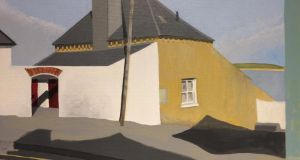 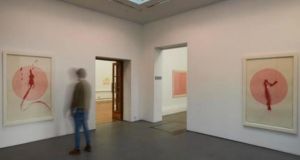 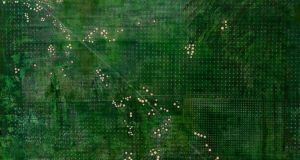 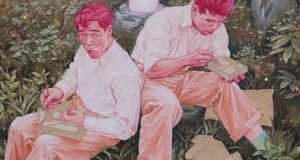 Shane Berkery, ‘Lunch in the Meadow’, oil on canvas 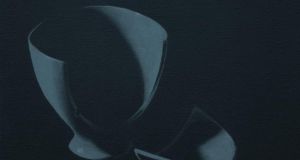 Shane Berkery’s paintings “are informed by my own photos, including old family photos from my Japanese side”. The paintings are a way of meditating on and reconsidering the photographs. “Visual references are sampled, spliced and refracted” to produce images of stylised, quasi-photographic realism with a non-naturalistic palette dominated by “Vandyke brown, white, ultramarine, cadmium yellow and permanent rose”.

Each year Cork Arts Society members are invited to submit work for a group show. Sheer numbers mean editing is necessary and three external selectors do that. This year 268 pieces were whittled down to a final 94, still a tight enough fit in the Lavit’s spaces. There’s a great range of work on display, from a great range of artists – Angela Gilmour, Con Kelleher, Damaris Lysaght, Julie Kelleher and Margaret O’Sullivan among them.

Three distinct projects involving intricate work on paper and textiles in installation, performance and drawing, in which Bernadette Cotter explores “life and death, religion and ritual, pain and sorrow”. Countless used piano strings, thousands of shard of broken glass engraved with poems by Eavan Boland, Adrienne Rich and Mary Oliver, sewing needles wrapped in black thread all feature in among the elements used.

Elva Mulchrone’s work stood out in NCAD’s exceptional graduation show in 2016. Her work is described as “research heavy” – research conducted at Columbia University NYC  in this case – but at a certain point always makes a leap from the marshalling of information to a kind of abstract painting that has an inbuilt awareness of existing in an age of big data and the operation of algorithms in such fields as economics – her first field of study, as it happens.

The show’s title is apt. Adam Pomeroy aims for what he describes as a “minimalist realism, paring down representation to the essential”. The result is, he says, as much about that is not there as what we can see. Each subject is animated by “mere flickers of light, like the perception of ghosts.” The viewer will instinctively, he believes, intuit what is not immediately visible.

TV Guide: 30 of the best shows to watch this week
8