An artistic experience crafted for the modern mind 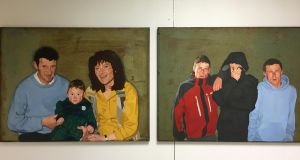 Elva Mulchrone’s work, in her nicely titled show Irrational Exuberance, is in some respects a bit like Mark Rothko reimagined for an era of big data and algorithms.

It is as if the cloudy masses of colour in her paintings coalesce from masses of data, visualisations of the nowhere and everywhere of cloud storage. As with the clouds that harbour a sizeable proportion of the world’s information, trivial and significant, underlying them is a binary grid of digital networks. Patterns of connection emerge from the grid, but primed as we are to see them, that doesn’t mean we can decipher the patterns.

In Mulchrone’s paintings, built from layers of silkscreen, oil and acrylic, the emergent patterns glow like galaxies in the vastness of space.

This is not to say she has maps of the heavens in mind – she almost certainly does not. But the association is appropriate and reasonable and may well have struck her at some point. More likely, for sure, is a connection with the spooky reality of computerised trading in the financial markets, as money is moved around in microseconds, with whole sequences of mind-bogglingly expensive trades concluded before a human observer can even register what is going on.

Complex realities unfold by virtue of algorithms that are, in essence, simple, and humans struggle to keep track. It may come as no surprise to learn that Mulchrone first studied economics before turning to art. Even then, something of the economist persisted in her. Her approach leans heavily on research. Not so much economic research, one presumes, as research into the uses of data and virtually limitless computational power in financial markets and other areas involving digital communications.

It’s fruitful terrain to explore but, as every MA and PhD researcher learns, the crucial point comes when one has to leave behind the research and commit to paper – and linen, in Mulchrone’s case.

She is most successful when closest to the nature of her source material: offhand, impersonal. There my be a theoretical rationale to the overtly handmade quality of the dots of pigment that pick out patterns against the generality of data clouds – the irrational human touch in a relentlessly non-human environment, say, echoed in a video dance piece that forms part of the show – but it jars a little visually. More, it jars in a way that trips the work up a bit rather than enhancing it.
eight-gallery.com

Speaking of algorithms, one of the alleged downsides of social media is that they corral users into diminishing tribal circles.

If you only hear music and opinions that echo your tastes and views, perspective can only narrow. That is roughly where curator Aisling Prior is coming from in her approach to this year’s Hermione Exhibition at Alexandra College.

In line with Alex’s progressive ethos, Prior set about making an exhibition specifically for young people that would, she hopes, challenge them a little and prompt them to think anew about what art might be and their interaction with it.

So, for example, Seán O’Rourke’s urban landscapes and portraits are painted on steel plates once used to shutter the windows of vacated inner city flats. Megan Burns dispenses with the usual rectangular format in exceptionally well-made geometric abstracts that explore spatial and colour relationships in compositions both lyrical and architectonic. Sabina Mac Mahon plays on our understanding of artistic style and identity with works attributed to pioneering Irish modernist Caoimhseach Ní Lamhna. And Colin Martin’s deadpan interiors are never quite what they seem.

Prior has put together an engaging, stimulating mix of work that is always accessible but can also be read on several levels. Among the rest of an extensive line-up are Peter Bradley, Cecilia Danell, Aoife Dunne, Roisin McGuigan, Will O’Kane, Lucy McKenna, Niamh McCann and Mandy O’Neill.

Founded in 1866 Alexandra College has from the start encouraged and asserted the rights of women to engage in all aspects of public, political, scientific, academic and artistic life. The college has an exceptional cultural pedigree. Its annual art lecture was instituted in 1896 – this year it was delivered by Una Sealy –  and 25 years ago an annual exhibition was introduced to coincide with the lecture. It’s a terrific idea that one hopes will last.
Until March 16th, alexandracollege.eu

In Adam Pomeroy’s monochromatic paintings, motifs are articulated by a fall of pale, muted light, like a beam of moonlight.

A stillness pervades his work whether the subject is an object or, as is often the case, a person. Both still life items and people are usually individual presences, isolated in pools of darkness, with just faint indications of the parameters of a room, for example. If the subject is a person, he or occasionally she is as if lost in thought.

This basic format allows him to focus on one person or thing without losing a sense of the surrounding world. The enfolding darkness is not just a void, rather you feel everything is there in the shadows. It’s as if Pomeroy is constantly trying to establish how much he can exclude from visibility without losing a sense of the enveloping world. He can leave out quite a lot, in the event. As he sees it, he comes from a photorealist position, but allies realism with minimalism.

He refers to the tradition of the vanitas still life, a reminder of mortality, and identifies with the theme. It could be that the shaft of light, in his paintings, defines a brief moment of life in an infinitely greater darkness. He cast a melancholy spell, but the work is far from gloomy. In his concentrated attentiveness there is also a delight in sheer vitality.
Until March 22nd, thedoorwaygallery.com

Pinocchio: A gorgeous but dark and unsettling reworking
9