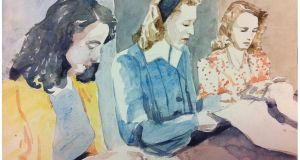 Crystalline Disappearing Worlds – Siobhán McDonald
Existing Realities – Diarmuid Breen
Taylor Galleries, 16 Kildare St, Dublin Until April 7th taylorgalleries.ie
Science and poetry meet in McDonald’s evocations of change in nature, addressing both narratives around climate change and the history of human efforts to explore and illuminate natural processes. Breen’s paintings based on found photographs are concerned in one way or another with work. Evoking an indeterminate past, sometimes pinned down to the 1930s, Breen’s studied, sometimes cryptic images recall the mildly eerie, retrospective surrealism of Belgian painter Michaël Borremans, with a dash of Luc Tuymans.

Fake: The Real Deal? From faux tastes to chemical copies
The Science Gallery, Trinity College, Pearse St, Dublin Until June 3rd sciencegallery.com
Does it matter if it’s fake or real, so long as it does what it’s supposed to? This show asks when authenticity matters, when copying is fine, and looks for the fine line between faux-pas fakery and convincing copies. With Matt Kenyon, Isaac Monté and Toby Kiers, Laura Allcorn and the Institute For Comedic Inquiry, Chris Tonkin and Rick Snow, whose AI project “generates a new album of songs every 15 minutes” – 700 new songs a day.

In the written word plus paintings, printworks, sculptures, photography and video, Corcoran takes on the full complement of contemporary fears and anxieties – his title refers to the twins of Greek myth, personifications of fear and terror. He considers media treatment of a host of concerns, from financial woes to climate change, political tensions to rogue comets.

Fox worked with the residents of Drum village over the course of a year to build a carefully considered photographic portrait of the place, with its distinctive landscape of lakes and drumlins, and the people, who he describes as a resilient community grappling with the challenges facing the majority of Ireland’s rural towns and villages. The project is a collaboration between the Gallery of Photography Ireland and Monaghan County Heritage and Arts Offices.

The work of German artist Pleitner – bold, colourful paintings he describes as “sci-fi expressionism” – was warmly received when he began to show at the Kerlin. This current body of work alludes to the sun god, Helios, whose “chariot of fire-darting horses” races across the sky. But it also refers to a shade of vivid red, which Pleitner uses here, extending beyond the bounds of paintings to create three-dimensional forms and objects.