Helena Gorey: There’s more to her art than meets the eye

To opt, as Gorey does, for monochrome compositions is brave. Is she looking for trouble? 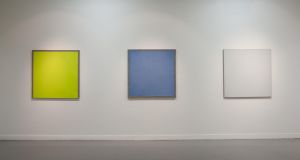 Helena Gorey: Proscenium
★★★★★
RHA Ashford Gallery, Dublin
There’s a broad sympathy between Helena Gorey’s paintings and the work of a number of artists, mostly figures associated with kinds of minimalist abstraction, including Robert Ryman, Agnes Martin and perhaps Robert Mangold. But she differs from all of them in one way or another.

“What you see is what you see,” as Frank Stella commented in 1964 or, in Ryman’s words: “What painting is, is exactly what people see.”

Gorey has consistently implied that there is more than what you can see. She gives her works allusive titles, often very specific, sometimes much less so, but always referring to the world beyond the work in itself, or beyond “what you see”.” Specific references are contained in such titles as Linden, Bison, Snowberry, Rook or Rosehip.

Much more general are Mist, Mountain, Twilight, Sky and Glow. The bias towards the natural world is unmistakable. This has to do with the area around the artist’s home, in Blackchurch in rural Co Kilkenny. And it has to do with the overwhelming perceptive rush of daily life, the experience of re-encountering the same environment, and being aware and attentive over days, seasons and years, continually noticing details.

To opt, as Gorey does, for monochrome compositions, and then to up the ante by using off-whites as her single hue in several instances (Snowberry, Mist, the excellent Twilight) is brave and sounds as if she is looking for trouble. For whatever reason, minimalist abstraction rubs a lot of people up the wrong way. Think of Carl Andre’s notorious bricks. And much more oddly, in the recent past the gentle, austere work of Martin (“My paintings are about merging, about formlessness”) was for a time the most likely art to attract the physical abuse of disgruntled viewers. People felt impelled to throw things at it.

Gorey’s work is quiet, but those fields of colour, be they creamy white or as intensely red as Rosehip, do put it up to the viewer. She is not illustrative at all, and many people crave illustration when they look at a painting.

To some extent her paintings are distillations. They absorb a huge amount of input and refine it down to the most economical means of expression – but she’s not aiming for a Platonic essence, more latching on to detail in the plurality of the everyday. And it’s based on feeling, not logic or algorithms. Her title, Proscenium, hints at all this. The painting is a frame through which we view the world.

Mostly, some chance elements are preserved, glimpses of underlying colour, ragged edges. They intimate the sustained, cumulative nature of the process. Gorey is patient and serious, and everything she does seems entirely necessary and right. Gerhard Richter once remarked that he aimed to make paintings that have the rightness of nature, but without imitating nature. It’s a good description of what Gorey achieves.

The Time-Travelling Circus: The Recent Return of Pablo Fanque and the Electrolier – Katrina Palmer
★★★★
Temple Bar Gallery, Dublin
Katrina Palmer is a sculptor who works primarily with words, but the words are not an alternative to the material world, which is always there just beneath the surface, nudging its way in.

She writes stories, usually involving a direct connection with the physical world in the form of specific locations and environments, and sensations. As the artist Elizabeth Price perceptively put it, her stories entail “physical, psychological and sexual encounters with materiality, so that things and thoughts collide”.

This, her first Irish exhibition, stems from her story in issue 78 of Essays on Sculpture: The Time Travelling Circus: The Dossier concerning Pablo Fanque and the Electrolier. The story is an imaginative riff, a fantasy linking several contingencies.

One is a factual account of a travelling circus run by William Darby in the 19th century, under his stage name, Pablo Fanque – he was  reputedly a brilliant equestrian performer. His first wife, high-wire performer Susannah Darby, was killed during an indoor performance in Leeds in 1848, following a structural collapse. Although more than 600 audience members were thrown from their seats, she and her dog were the only fatalities. Darby remarried and lived until 1871, but he and Susannah are buried in St George’s Fields, now in the grounds of Leeds University, with the main university library, the Brotherton Library, nearby.

Palmer has made a connection between the library’s huge cylindrical reading room (deliberately designed to be larger than the British Museum Reading Room) and a circus big top. An elaborate art deco electrolier – an electric chandelier – is suspended from the centre of the concrete dome, which is where Palmer’s real flight of fantasy comes in. She imagines Susannah reincarnated as the electrolier, which proceeds to tell her story, endlessly rehearsing her feats high above the crowds and her calamitous mishap. Pablo, meanwhile, has joined the Time Travelling Circus with hopes of revivifying her and the library has become the circus venue.

Most of the gallery’s extensive floor is occupied by vastly enlarged blueprint (actually white on black) of the library floor plan, which looks fantastic and allows visitors to explore the layout and imagine the additional dimensions. They are provided by an audio track – quiet in the reading room! – recorded in the reading room, with additional voices and a cacophonous circus band. Another audio strand is accessed through earphones: sampled from experimental musicians Karl Blake (in one of his groups, The Shock Headed Peters) and Tom James Parmiter. Incidentally, as part of the exhibition, a copy of the Dossier features on the Recently Returned shelf of the Brotherton Library.

Where The Time Travelling Circus falters, surprisingly, is when it comes to the words, and the entire audio element. It is curiously underwhelming given the heady, Nights at the Circus nature of the material and doesn’t quite live up to the promise of the dramatic floor plan setting, but there’s still plenty on offer here. Roll up, roll up.