The Mac’s screening process is hit and miss 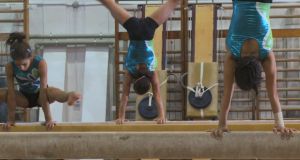 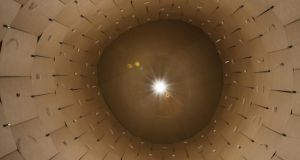 Zimoun’s monumental sound sculpture, which is ingenious and impressive 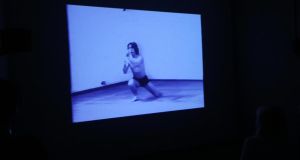 A still from No More by Mairéad McClean, which won the £20,000 prize

As its name suggests, Mac International cast its net wide, aiming to scoop up artists from around the globe to compete for a £20,000 (€25,600) prize. The winner of the Turner Prize gets only £5,000 more. Despite its patchy reception in recent years – and this year especially – considerable prestige still attaches to the Turner, and winning it will enhance an artist’s reputation and career prospects. In that respect The Mac is starting from zero. It attracted more than 1,000 proposals, which the three-person jury whittled down to a long shortlist of 24. All of them are on view at The Mac.

In the end it was a case of local girl makes good: the accolade went to Tyrone-born Mairéad McClean for her short video. No More is a low-key montage in which video of a dancer doing free-form exercises with an alternative, oriental vibe is juxtaposed with news footage from 1970s Northern Ireland, with voices of the time translated into computer-generated sound-wave patterns.

McClean says she had in mind the contrast between minds closing in the North and the possibility of minds opening elsewhere.

McClean’s father, the civil rights activist Paddy Joe McClean, was one of hundreds interned in 1971. He and some other internees were subjected to a shocking, experimental regime of physical and psychological torture. The man who ordered her father’s internment, Brian Faulkner, features in the archive clips in No More.

Mairéad McClean has been based in London since 1989, when she attended the Slade to pursue her postgrad studies. But it’s hardly surprising that her work, mostly in film, has been substantially shaped by and preoccupied with ideas relating to the past – often a troubled past – the nature of memory, displacement, surveillance and anonymity, freedom and restriction, with an underlying mood of apprehension.

There is some common ground here with Willie Doherty, although McClean works in a more informal way. No More is a good, persuasive piece, but also a minor one. Presumably a substantial solo show will follow.

Even apart from No More, screen-based work fares well in the exhibition. One of the best is Brussels-based Shelly Nadashi’s film A Hidden Quiet Pocket, which sees her involved as writer, director and performer. In a raw, compelling, close-up two-header, Nadashi takes the role of a masseuse at work on a wealthy client (fellow performance artist Hagar Tenenbaum). Their intense, surreal dialogue centres on a luxury flat that the client anticipates letting for lots of money.

Nadashi packs a lot into this simple scenario. The unlikely, rough, denim-clad masseuse could as easily be assaulting her vulnerable, undressed client – who, incidentally, does not look the part either. James Buchan summarised Karl Marx’s view of money as “frozen desire”, and Nadashi’s packed dialogue pursues the notion relentlessly through a catalogue of fetishistic commodification: wealth, food, clothes, property, design, luxury, social relations, status and sexual relations.

We are left with the contradictions inherent in the system. Why doesn’t the masseuse rebel? Look around at the way the world works and we know why.

Nadashi and McClean opt for stylistic informality. Finnish film artist Salla Tykkä’s Giant, on the other hand, is as technically sleek and polished as its subject: the Romanian gymnastics schools of Onesti and Deva. Tykkä counterpoints the severe beauty of the modernist architecture with the beauty of athletic dedication and discipline. It is thoughtful, open and consistent with the artist’s fascination with adolescent energy and physical skill, although, as with McClean, it’s a minor work in her oeuvre.

That is a recurrent theme, as with Maria McKinney, who was responsible for one of the best ever installations at both The Mac and The Lab in Dublin, Somewhere but Here, Another Other Place, a couple of years back. In this show, Abyssals, sculptural columns of the detritus of modern consumer packaging assume a geological, reef-like solidity. It is really good, but not in the same league.

Zimoun’s monumental sound sculpture is ingenious and impressive, as is Charbel Samuel Aoun’s Whispering Taps, in a quieter vein. Some works look promising but leave you with the feeling that you’re not seeing enough or that they are too fragmentary, as with pieces by Lenz Geerk and Tim Ellis. Euyoung Hong’s House Project, in which a dwelling’s entire contents are crammed into an unclad, prefab framework, looks promising but turns out to be mildly interesting at a high logistical cost.

There’s also a lot of fairly indifferent material. Can these 24 have been the best of the thousand-plus entrants? About a third of them are as good as anything on offer. After that, things get more difficult.

The jury comprised Mac curator Hugh Mulholland; Italian curator and writer Francesco Bonami; and Tate Partnerships head Judith Nesbitt. Their curatorial records, individually, are pretty good overall. And one would think that the chemistry would be interesting. Yet, while it is well worth seeing, the show lacks sparkle.

The Mac, Belfast, until Jan 18, themaclive.com