The best art exhibitions of the week

Including Niamh O’Malley in Dublin, and Elva Mulchrone and Rosa Mäkelä in Galway 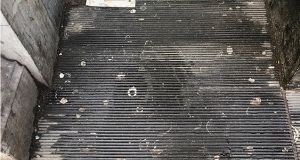 1001 Shows: Damiano Curschellas and Colm Mac Athlaoich
Pallas Projects/Studios, Dublin, Until March 2nd
You have to be on your toes to catch shows at Pallas. This opened on Thursday evening and ends on Monday. But did you ever stop to think how galleries are haunted by ghosts of exhibitions past? Add to that the fact that after each show, the walls get painted – and so down the years, they must get infinitesimally smaller. Curschellas and Mac Athlaoich (briefly) muse on this, for five days, before those walls get painted again.

Placeholder: Niamh O’Malley
Mother’s Tankstation, Watling Street, Dublin 1, Until April 18th
You’ll have to forgive, and bear with the Mother’s Tankstation description of Niamh O’Malley’s new exhibition, which opens today. Making a virtue of the fact that they don’t actually know what’s going to be in the show is a tactic that could easily fall flat on its face (or into pseud’s corner). But O’Malley is always interesting, and her work tends to hint at things just out of reach. Let them sit gently, and you’re often overtaken with a powerful wave of something special.

Committed to Falling: Gabhann Dunne
Uillinn, Skibbereen, Co Cork. Until April 4
Dunne’s 100 small oil paintings of migratory birds are worth a visit if you missed them in Limerick, but for Uillinn, he’s added a new series showing extinct and non-native plants to be found in West Cork. There’s a nice parallel with Mairead O’hEocha’s show at Temple Bar (see below), though we’d be better off without the climate crisis that has precipitated such musings. See also William Bock’s Land Walks in Gallery II.

Tale Ends & Eternal Wakes: Mairead O’hEocha
Temple Bar Gallery & Studios, Temple Bar, Dublin 2. Until April 25th
Delving into Dublin’s Natural History Museum (aka the Dead Zoo) is always worthwhile, and O’hEocha’s paintings of some of the museum’s dioramas add another layer to that odd faking-the-real-with-the-real thing that dioramas do. Add the separation and suspension of belief that these were once living creatures and you have a fascinating show.

The Future is Clean and Round: Elva Mulchrone and Rosa Mäkelä
126 Gallery, 15 St Bridgets Place, Galway. Until March 15th
Eton Mess may be a rather tasty pudding but, as a video by Elva Mulchrone, it refers to the state of the UK today. Another video, Departures looks at Remain and Leave voting patterns in the Brexit referendum. Alongside, Rosa Mäkelä is looking at the emotional impact of the times we’re in. Thoughtful stuff from a new generation.