Art in focus: Multipolar, No 1901 by John Noel Smith 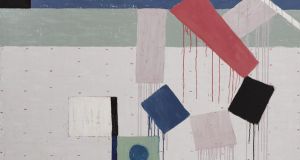 What is it?
Multipolar, No 1,901 is a large painting by John Noel Smith.

How was it done?
Smith uses traditional materials in a traditional way, paying great attention to the nature and capacities of his materials.

Where can I see it?
Smith’s current exhibition, Multipolar, is at Hillsboro Fine Art (49 Parnell Sq West, Dublin. Until March 7th, hillsborofineart.com).

Is it a typical work by the artist?
In a way, yes. The artist deploys a new range of motifs in a way we haven’t seen in his work before, but that has been the pattern from early on. Early on included studying at the then Dún Laoghaire School of Art in the latter 1970s, a particularly good time, when academic structures were more flexible. Smith’s first exhibited paintings were artistically related to Philip Guston in his abstract expressionist days, clusters of organic-seeming forms, very painterly. A postgrad scholarship brought him to Berlin. His work gained immensely in confidence and ambition in the environment of Berlin, a painting-friendly city with an international art community, both challenging and encouraging (aiming high, he has always kept a watchful eye on German painter Gerhard Richter, for example, and there is the occasional nod to Richter in his painting).

As was the case with many before him, exile had the effect of directing and focusing his interest towards Ireland, and Irishness, and not in a sentimental or nostalgic way. His painting engaged playfully and pointedly with an unfolding list of emblematic motifs, variously including ogham, roundtowers, Irish stew, shamrock in the Knot paintings and much more, the process continuing following his return to Ireland soon after the turn of the century (he lives and works in Co Wexford).

Motifs do not amount to the sum of the content of his paintings, however. That is, it’s not a question of solving the puzzle of a painting by pinning down the symbols. He engages more in the sense that a jazz musician engages with an existing tune, to make something new rather than to make a definitive version. Smith’s lively, mischievous intelligence is allied to consummate technical ability. His sense of colour is unerring and distinctive, and his feeling for texture and scale equally sure. While the work is non-figurative, it is responsive to the world in all its complexity as encountered by the artist and should be viewed in relation to the world, not just as an autonomous, detached activity. In this case, Smith mentions that he was preoccupied with co-ordinating ideas to do with “the cartography of the centre with that of the periphery”, with an eye to finding “a new field of vision”. But that will, he acknowledges, mean incorporating contradiction into the structure, demanding a different, de-centred, “multipolar” view.

There'll be no Bauhaus in this White House
7