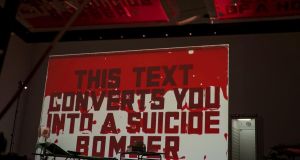 What is it?
Bloodline is an installation by Russian-born, French-based artist Andrei Molodkin.

How was it done?
That’s just the thing: the huge images on the walls (and ceiling) are perspex boxes, and projections of perspex boxes, though which blood is circulating around provocative texts including: This Text Converts You Into a Suicide Bomber; and This Text Engages You in a Time-Bomb Explosion of a Holy Site. Go to the gallery and you too can donate blood for pumping around the artworks. Does this turn you into what the texts say? Not quite. Molodkin wants to get us thinking about how viewing makes us complicit. We are participants in the ills of our societies and the wider world, whether we like it or not.

Where can I see it?
Bloodline is on show at Rua Red in Tallaght until March 23rd. It is the final exhibition in a series of collaborations between Rua Red and a/political, an organisation based in London and Maubourguet in France that supports artists in making large-scale politically and socially engaged works and projects. ruared.ie, a-political.org

Is it a typical work by the artist?
Yes. Alongside drawings in biro (ballpoint pens were standard issue in the Soviet military), Molodkin is best known for his blood works. These are unsurprisingly, and deliberately highly provocative. Take Le Rouge et le Noir, which was made for the Russian Pavilion of the Venice Biennale in 2009: the artist created acrylic block replicas of the statue of Nike (goddess of victory), through which was mixed the blood of a Russian soldier, and a Chechen war veteran. It also included Chechen oil – and was ultimately removed from display.

In 2013, Molodkin was at Derry’s Void Gallery with Catholic Blood, in which a hollow acrylic replica of the rose window at the Palace of Westminster was pumped with blood – donated by 36 Catholics. According to the artist, some people were miffed that there was no Protestant blood present. “It was never my intention to mix religions,” Molodkin said. “The intensity is in the separation.”

Bodily fluids are nothing new in art. Spit helped to lubricate the first pigments, and the forgers of the Turin Shroud used real blood to add veracity to their fakery. More recently the titles of artworks such as Andres Serrano’s Piss Christ, and Vito Acconci’s Seedbed (think about it) give the game away as to what they’re made of. British artist Antony Gormley has also used semen.

When it comes to blood, Molodkin is not alone. Marc Quinn’s Self is a frozen head made from the artist’s own blood. Filipino artist Elito Circa signs his works in blood (he also uses it in his paintings, using paintbrushes made from his own hair).

With all these works, it’s worth imagining them without the blood (or sweat and tears) to see if they still stand up. If they don’t it’s shock and schlock rather than something more solid. Although for a mix of the two, in both subject matter and medium, take a look at American artist Sarah Levy’s Bloody Trump painting: made with the artist’s own menstrual blood. It’s truly ghastly – but that doesn’t mean it’s not good.