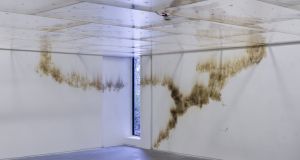 In the fight to save the environment, the arts must surely be on the side of the angels. Take visual art: in the average artist’s statement, the art is most frequently to be found “questioning”, “interrogating”, “demanding” and “positing”. In so doing, the art aims to draw attention to things, with the implication that it will generally leave the world a better place by its presence.

Yet the visual arts is also pretty high up in the rogues gallery of uber-polluters. From poisonous paint pigments to the highly dodgy chemicals in printing; and from the plastics and polystyrenes currently so cool in contemporary sculpture, to the sheer volume of works made in order to satisfy the art world’s treadmill-desire for the new: the making of art can hardly be said to be carbon neutral.

Add to that the itineraries of the annual air-miles fest that is the art circuit, and you have a toxic brew. So what’s an artist to do? Some do make work that highlights, questions, demands and interrogates. The irony is when the world’s leading collectors and curators fly from Basel to Miami, Kassel to New York to see climate-conscious pieces by Olafur Eliasson, Sebastiao Salgado, and John Gerrard, whose Western Flag, 2017, and Burning Oil Fields, 2013, linger with exquisite beauty on the global climate catastrophe.

In another register, images of Agnes Denes’s Wheatfield from 1982 have been recently circulating in arts media pages around the world. Denes planted two acres of wheat on a landfill site within view of both the Statue of Liberty and the Twin Towers. “Planting and harvesting a field of wheat on land worth $4.5 billion created a powerful paradox,” wrote Denes, and yet I can’t help feeling it also gave the traders of Wall Street something pretty to look at on their way to enact fresh rape on the world and its economies.

The harvested grain was sent to 28 cities around the world, for an exhibition entitled, The International Art Show for the End of World Hunger, which seems even more unsettling these days than the original images of the wheatfield, with the Twin Towers shining bravely in the background.

So what to make of Mexican-born, Brussels-based artist, Gabriel Kuri’s installation at the Douglas Hyde? Make your way to the top of the stairs, which usually lead down to the huge pit that makes up the gallery, and find your route barred by a large plastic-covered grid that takes up the entire area. Head, instead, down the seldom-used spiral staircase, and find yourself in a diminished space.

Kuri has used his grid to drop the ceiling height, and so reduce the building’s energy consumption. We have to take his word for this, as Chart, 2020, is a series of brown swirls of wall drawings, made with the smoke achieved by burning sheets of paper. These, we are told, contained figures relating to the cut in energy bills, as well as the logistics of making the whole thing in the first place.

The plastic-covered grid lets in filtered light, and is scattered with moth wings, the odd coin, bits of cigarettes. Scattered is the wrong word: they are laid out in formal sets, which denies the installation the creepy potential of, say, Mike Nelson’s Tourist Hotel from 1999 at the Douglas Hyde, which also lowered ceilings, added crawl spaces, and created unsettling rooms that made you glad to get out intact and relatively sane (I loved it).

Downstairs, and in the middle of Kuri’s exhibition, is a set of sculptures, leaning one against the other. These are made up of wooden art crates, containing oversized objects made from various combinations of thermally insulated foam, fibreglass and aluminium. One, Irish Heating Bill, 2019, includes a massive euro coin and a smoked-out fag butt. There’s wit here, and a laudable intent, but it feels both a little overblown and portentous, good looking and not quite witty enough.

That said, the climate catastrophe is no laughing matter, it’s just not entirely clear to me how aestheticizing it is going to help to save the day. I did sit there in the quiet, and thought about how f**ked we are, but no more than that. Like Denes’s Wheatfield, Kuri’s project also explores exchanges of energy, money and labour, but the world has changed faster than anyone could ever have expected, and gestures to address it, even artistic ones, have to have grit in order not to be empty.

It may not be the artist’s job to lead the way, but it is increasingly difficult for the visual arts to have its cake and eat it. Yes, artists occupy a privileged space, slightly to the outside of society, from which they can comment (as well as posit, question, interrogate, and all the rest). The problem is, when the global system that supports the art world is predicated on such high levels of ultra-consumption, that position involves, as most artist’s statements would have it, a very problematic juxtaposition indeed.