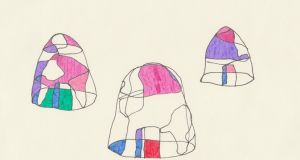 Laura Fitzgerald
Ashford Gallery, Royal Hibernian Academy, 15 Ely Place, Dublin Until March 8th
Laura Fizgerald has a track record in devising absurdist parables, both incisive and funny, exploring the predicament of the artist working in the fraught overlap between the art world bubble and the real, pressing world. Her rural background usually has relevance to the fantastical scenarios she proposes.

Andrei Molodkin
Galleries 1 and 2, Rua Red, South Dublin Arts Centre, Tallaght, Dublin Until March 27th
In the concluding partnership with a/political, Adrei Molodkin’s uses blood – human – in work exploring politically charged language used by different groups. The blood, injected into the sculptural piece is, needless to say, donated voluntarily by individuals who opt to be part of the artwork, and the pieces will “shift and change” throughout the run.

Judy Carroll Deeley Custom House Studios Gallery, The Quay, Westport, Co Mayo Until March 17th
In her lush, carefully considered paintings, Judy Carroll Deeley considers machines, industrial and agricultural, almost as a distinct living species, subject to  mutation and evolution. They make up a species at the service of humans and one that progressively degenerates the atmosphere as they decay.

Darragh Shanahan The Space Between, 28 Fenian St, Dublin Until March 13th
Writing about Darragh Shanahan’s work, Darren Campion notes that “photographers are as fond of clouds as the Romantic poets seems to have been.” Skies are, he observes, familiar but, in every passing instant, unique, something that fascinates not just poets and photographers, but virtually everyone. And it is always tempting to read a particular significance in a momentary arrangement of light, cloud and shadow.

Christine Mackey
Wexford Arts Centre, Cornmarket, Wexford Until March 21st
As well as being an artist, Christine Mackey is a gardener and seed-saver. The title of her show comes from anthropologist Gerard Reichel-Delmatoff and refers to the Indian practice of making “gardens” – temporary plots – in forests, designed to secure the survival and important plants faced with environmental stress. Mackey applies the term and the approach to the wider context against the background of climate change.