Raphael: A celebration of his life and work, on his 500th anniversary

Struck down in his prime, the Italian Renaissance master died on his 37th birthday 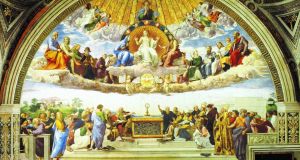 Raphael: a detail from The Disputation of the Holy Sacrament, at the Apostolic Palace

Raphael missed his birthday party in Rome. It was to be the biggest in 500 years, with a year-long celebration and the largest collection of his work assembled in one place. Then Covid-19 struck, just like the mysterious illness which killed the artist on his 37th birthday.

Raffaello Sanzio da Urbino (1483-1520), known to his contemporaries as “the divine Raphael”, was one of the most celebrated artists of the Italian Renaissance. A contemporary of Leonardo da Vinci, 30 years his senior, and Michelangelo, eight years older, the young Raphael learned the rudiments of his trade from his father, Giovanni, a court painter in the duchy of Urbino close to the Adriatic Sea.

In his mid-teens, Raphael collaborated with the celebrated Umbrian master Pietro Vannucci, before moving to Florence in 1504. His career changed dramatically in 1508 when he obtained an audience with Pope Julius II (1503-1513) who commissioned him to paint his private apartments at the Apostolic Palace.

In May of that year, Michelangelo began to paint the ceiling of the Sistine Chapel, an enterprise which would occupy him for four years. Meanwhile, Raphael worked nearby decorating the walls of the papal apartments with monumental frescos. Shortly after his arrival, Raphael met Agostino Chigi, the wealthy Sienese banker who commissioned prestigious works and introduced him to influential secular patrons.

Julius had made the Eternal City an enormous workshop, continuing an ambitious building plan launched 30 years earlier by his uncle, Pope Sixtus IV (1471-1484). In 1506, he laid the foundation stone to replace the fourth-century basilica built by the emperor Constantine over the tomb of St Peter.

With the election of Giovanni de’ Medici, son of Lorenzo the Magnificent, as Pope Leo X in March 1513, Raphael’s career was assured. The pope delighted both in the artist’s work and in his company, commissioning him to continue to decorate his private apartments and the adjacent loggia overlooking the city. With the sudden death of Donato Bramante in April 1514, Raphael succeeded him as architect of St Peter’s Basilica.

Having completed the ceiling of the Sistine Chapel in late October 1512, Michelangelo left Rome for Florence, where he worked on the monumental tomb commissioned by Julius several years earlier. Leonardo da Vinci had lived in the Vatican in the early months of Leo’s pontificate but left Rome in 1514. With the departure of both artists, Raphael was the undisputed leader of the Roman Renaissance. There was talk that the pope intended to make him a cardinal.

When Cardinal Dovizi da Bibbiena offered his niece’s hand in marriage, Raphael politely declined. Perhaps he eyed the possibility of entering the elite group of cardinals from which would come the next pope. He wrote excitedly to his uncle in Urbino, a priest, about his rising fortune, boasting of his wise choice not to accept the cardinal’s niece as his bride.

In the early summer of 1515, Leo commissioned Raphael to design 16 tapestries for the Sistine Chapel, scenes from the life of St Peter and St Paul drawn from the Gospels and the Acts of the Apostles. Leo wanted to outdo his predecessors. As a young man, between 1495 and 1500, he had travelled extensively in northern Europe with his cousin Giulio, the future Pope Clement VII, and had visited several courts.

Tapestries were the most luxurious form of decoration, far more costly than fresco. Woven with expensive wool and silk threads in a variety of hues, highlights were provided by the delicate addition of gold filament. As there was no weaver in Italy capable of producing the large tapestries within a reasonable time, Leo chose the workshop of Pieter van Aelst in Brussels. Raphael prepared a number of enormous drawings made from gouache and pigment and dispatched the cartoons to Brussels in the early summer of 1516.

The Flemish weavers regarded themselves as the finest in the world and regularly altered designs sent to the studio. When Raphael depicted the Risen Christ clothed in a white cloak, the weavers decided to improve the artist’s intention by adding golden stars and a fringe.

The tapestries had to be woven in reverse from the cartoons, each of which was cut into five segments so that all the looms could function simultaneously. When finished, the segments were stitched together and a red border applied to provide a sense of unity.

While the Flemish weavers worked on Raphael’ s designs, the artist struck an agreement with the engravers Marcantonio Raimondi and Agostino Veneziano to produce copies of the Preaching of St Paul, the Stoning of St Stephen and the Conversion of the Proconsul. These were printed and sold to his admirers.

Raphael almost lost his papal patron when, in the summer of 1517, the 26-year-old Cardinal Alfonso Petrucci and four other cardinals plotted to poison Leo. The cardinal was betrayed by his doctor and was strangled on July 26th in the dungeon of Castel Sant’Angelo, while the other conspirators paid Leo enormous ransoms.

Seven of the tapestries arrived from Brussels in the summer of 1519. Leo was so delighted with the enormous wall coverings that, although the series was not complete, he ordered them to be hung in the chapel on December 26th, the feast of St Stephen.

The papal master of ceremonies Paride de Grassis noted in his diary the pleasure of the papal court as they attended prayers with the pope. If the papal chapel at the Lateran had been described as “no holier place in the world”, then, according to de Grassis, it could be said of the Sistine Chapel: “Now there is nothing in the world more beautiful.” The tapestries were the last large-scale work which Raphael would design for his Medici patron.

While Leo admired the beauty of the tapestries, the Augustinian friar Martin Luther was unravelling the threads of Christendom in Germany.

Raphael was struck down in his prime and, after a brief illness, he died on his 37th birthday, Good Friday, April 6th, 1520. His biographer Giorgio Vasari related, with undisguised admiration, gossip that the painter had expired following a night of passion with one of his favourite female admirers. In fact, the painter had been in bed for two weeks with fever, being patiently bled by his doctors to relieve his poisoned blood. They may have killed him.

Leo was distraught with the news of Raphael’s death. According to his own request, Raphael was buried in the Pantheon, the second-century pagan temple, which had been converted into a church in the seventh century. The funeral took place on Holy Saturday, attended by most of the papal court and thousands of admirers. The unfinished painting of the Transfiguration was carried in the cortege by his distraught Garzoni.

The year following Raphael’s death, Leo died from pneumonia at the age of 45. His profligacy had bankrupted the papacy and the tapestries were pawned to pay for his funeral.

Shortly before his death, Raphael had commenced the decoration of a large hall in the papal apartments. Having sketched out the main themes, he left his pupils to execute the work. After Raphael’s death, the school spent a further three years concluding the Hall of Constantine.

In 2015, Vatican restorers commenced the task of cleaning the frescos discoloured by almost five centuries of grime caused by oil lamps and pollution. The project was funded by the Patrons of the Arts in the Vatican Museums – New York Chapter and made possible by a generous bequest. Two female faces, painted in oil, were discovered to be in Raphael’s hand. Museum tickets pay for the day-to-day running of Vatican City and gallery expenses while philanthropists fund major restoration projects.

The Vatican has vast, mismanaged wealth mired in financial scandals. Pope Francis has spent the past seven years battling corruption of all types and colourfully referred to the atmosphere there as one of “decomposing fruit”. In October, he removed a cardinal’s voting rights following allegations of embezzlement. The downgraded Cardinal Angelo Becciu held a bizarre press conference last month claiming that his exclusion from the next conclave denied him the right to be elected pope. One feels sorry for Francis.

If some of the artworks at the Vatican were sold, the money could fund charitable projects and administration. While jewels, gold and silverware can be easily disposed of, frescos and encased sculptures are fixed. The Vatican takes a long view, seeing itself as the steward of an unparalleled artistic heritage, guardian of the spiritual attic of civilisation.

Raphael’s World by Michael Collins (Messenger Publications) is available from messenger.ie and from bookshops, €19.95