Another Ireland: the revealing photographs of Tony O’Shea

The photographer’s bewitching images find the magic in the everyday 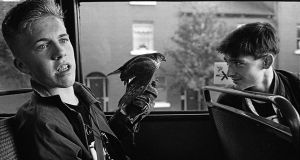 The Irish writer Colm Tóibín was first introduced to the photographs of Tony O’Shea when he was editor In Dublin magazine in the late 1970s. O’Shea was in the habit of coming to the magazine’s office every other Friday with a cardboard box containing a fortnight’s black-and-white prints, pictures he’d taken around the city’s streets. The photographs, Tóibín observed, in the introduction to their landmark collaborative book of 1990, Dubliners, “were like nothing I’d ever seen”.

He looked forward to O’Shea’s arrival, and each time, though the magazine might be going to press, found himself “taking the cardboard box away with me, looking through the photos again and again on my own and wondering about them”.

It was Tóibín who first sent O’Shea out on Dublin buses for a story to capture the life of the city from the upper deck. You would never say of O’Shea’s pictures that anything was typical of his work, but the photograph taken in 1989 of two boys and the kestrel is a memorable example of the magical realism that he so often seemed to locate in the everyday.

Strange animal spirits are everywhere apparent in his pictures: raggedy boys stand on horseback on city streets, hounds are held at bay on misty bogland; in a famous series, Dublin housewives carry Christmas turkeys home from a side-street butcher, heads and necks and beaks dangling at their knees.

O’Shea is 73 now. A retrospective book of his life’s work to date, The Light of Day, is full of natural wonders and human struggles that surface from the borderlands during the Troubles and in the rituals and recreation of his city. Each image wants to be a short story. And there is genius in revealing the teenage kestrel handlers’ eyes to be quite as bright and sharp as the bird he holds.

For Tóibín, “Tony O’Shea is interested in the moment where the ritual and the casual face each other in the complex light that comes from Irish skies. He likes gatherings and public spaces. And he is watching for the second when, even if his subjects are performing, a guard has been let down, and the camera becomes an uneasy, tentative, hesitant window into the soul. He seeks images of individual loneliness and isolation, figures in a state of reverie and contemplation, or figures in a state of excitement.” – Guardian